Kick Off Oscar Season With All the Best Actress Dresses 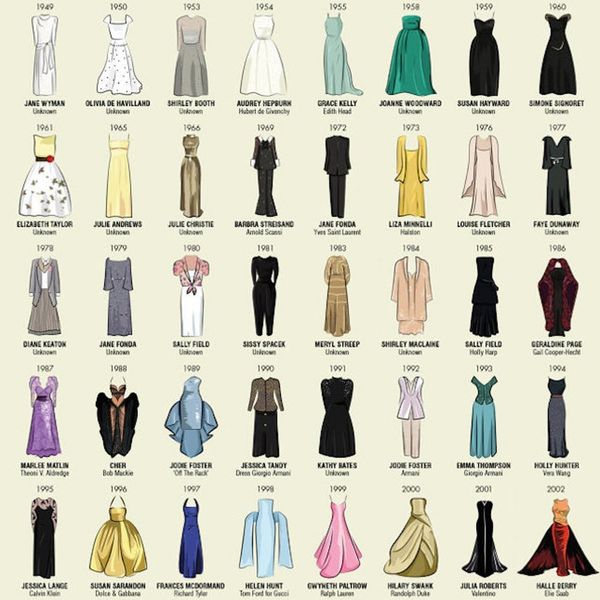 It’s no secret that the Oscars are just as much about who’s wearing what as they are about the movies. With Oscar contenders making their way into theaters and Oscar buzz a-buzzin’, we’re already beginning to fantasize about what we might be seeing come February – mostly what Lupita Nyong’o will be wearing. To help us roll out the red carpet UK consultancy Media Run Digital has put together this fun chart of dresses worn by best actress winners from 1929 to the present.

From Audrey Hepburn’s classic white tea-length dress to J.Law’s massive (and apparently not stair-friendly) Christian Dior gown, all the greats are here. While it’s fun to see the evolution of red carpet fashion, we can’t say there aren’t some sartorial crimes that occurred over the past 86 years. Marlee Matlin opted to wear puff sleeves to accept her Oscar in 1987 for Children of a Lesser God, and in 1981 Sissy Spacek accepted her Academy Award for Coal Miner’s Daughter in a polyester jumpsuit – and it might be better for everyone if we skip right over that watermelon-sized bow on Loretta Young’s 1948 dress.

Sadly, most of the earliest Oscar dresses have no record of who they were made by, but later down the line, we’re able to spot some of the great designers of our (and our grandmother’s) time. In ’55, Grace Kelly’s stunning sea foam dress was created by the legendary Edith Head, and Christian Dior pops up more than once. However, the ensemble we’re really ogling over is Diane Keaton’s 1978 blazer and skirt combo. Is it cool if we just rock that look tomorrow?

Which dress is your favorite from this bunch? Share your pick with us in the comments below.