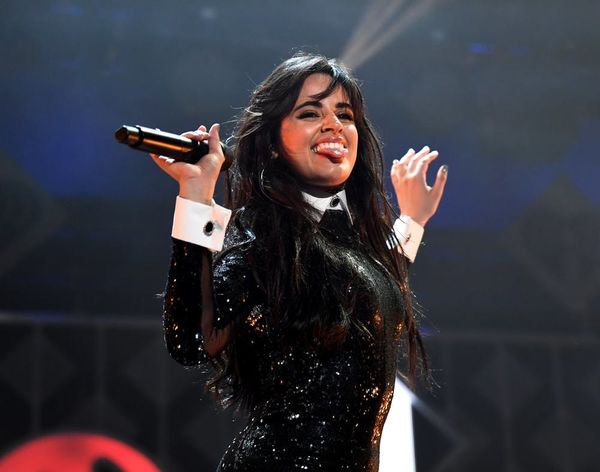 It’s hard to pick a favorite song from 2018, since there were so many stellar releases from both new and established artists. So we’re ending the year instead with a list of songs we could not get out of our heads. For better or worse, these tracks were everywhere in 2018 — on the radio, in stores, on TV, at awards shows, and yes, on our own personal playlists.

2. “Shallow,” Lady Gaga and Bradley Cooper:Rolling Stone ranked “Shallow,” the lead single from the A Star Is Born soundtrack, as the second-best song of 2018. It’s also up for a Golden Globe and four Grammys, including Record of the Year and Song of the Year.

3. “God’s Plan,” Drake: “God’s Plan” topped the charts in 14 countries and racked up more than 911 million views on YouTube. In the video, Drake gives away nearly $1 million — the entire production budget for the visual — to people and programs in the Miami area.

4. “Sober,” Demi Lovato: “Sober,” which Demi Lovato debuted on June 21, two months before her reported overdose, gave fans some insight into the singer’s struggles with substance abuse. “Mama, I’m so sorry I’m not sober anymore / And Daddy, please forgive me for the drinks spilled on the floor / To the ones who never left me / We’ve been down this road before / I’m so sorry, I’m not sober anymore,” she sings in the tune.

5. “Apesh*t,” The Carters: Beyoncé and Jay-Z took their art to a new level by filming their “Apesh*t” music video in the Louvre. It was the perfect introduction to their nine-track collaborative album Everything Is Love.

6. “I Like It,” Cardi B, Bad Bunny, and J Balvin: Cardi B had a stellar 2018, and the massive success of “I Like It” was a big part of that. Deemed the Song of the Summer at the MTV Video Music Awards in August, the Latin trap track from Cardi’s debut studio album Invasion of Privacy earned nominations for an iHeartRadio Much Music Video Award, a BET Hip Hop Award, and a Soul Train Music Award.

7. “Havana,” Camila Cabello: “Havana,” from Camila Cabello’s debut solo album, was everywhere this summer. It reached number one in the US, Canada, Australia, Brazil, France, the UK, and six other countries around the world, and the video starred none other than To All the Boys I’ve Loved Before heartthrob Noah Centineo.

8. “All the Stars,” SZA and Kendrick Lamar: Kendrick Lamar co-wrote and curated the Black Panther soundtrack, and while we loved every one of the 14 tracks, “All the Stars” is a definite standout, especially when you consider the accompanying music video, which is a beautifully stylized homage to African culture.

9. “High Horse,” Kacey Musgraves: Kacey Musgraves had one of the hottest hits of 2018 in “High Horse,” from her Grammy-nominated album Golden Hour. “I think we’ve seen enough / To know that you ain’t ever gonna come down / So, why don’t you giddy up / And ride straight out of this town / You and your high horse,” the former Nashville Star competitor sings.

10. “Back To You,” Selena Gomez: It’s almost impossible not to sing along with Selena Gomez’s “Back to You,” the lead single from the season 2 soundtrack for 13 Reasons Why.

11. “This Is America,” Childish Gambino: Somehow, even with commitments to Atlanta, Solo: A Star Wars Story, and The Lion King, Donald Glover found time to record and release new music as Childish Gambino. In May, he dropped “This Is America,” which debuted at number one in the US and went viral online, thanks in part to its award-winning music video. The Hiro Murai-directed video — featuring scenes depicting gun violence, police brutality, and racism — racked up more than 455 million views this year alone.

12. “thank u next,” Ariana Grande: Ariana Grande’s “thank u, next” might be the most epic metaphorical mic drop of 2018. The song, which she released shortly after her split from fiancé Pete Davidson, references several of the singer’s high-profile exes — including Davidson, Big Sean, Ricky Alvarez, and the late Mac Miller — and the roles they played in her life. “One taught me love / One taught me patience / And one taught me pain / Now, I’m so amazing,” she sings on the track. Did we mention that the music video pays homage to some of our favorite rom-coms?

13. “In My Feelings,” Drake: Drake had another hit on his hands with “In My Feelings,” which sparked a viral dance craze known as the #InMyFeelingsChallenge or the #ShiggyChallenge (after social media star Shiggy, who created the dance). For a few weeks this summer, it was impossible to scroll through Instagram and Twitter without seeing #DoTheShiggy or hearing “Kiki, do you love me?” The dance became so ubiquitous, in fact, that Drake made it the centerpiece of his music video for the song.

14. “Girls Like You,” Maroon 5 feat. Cardi B: “Girls Like You” was originally released as part of Maroon 5’s 2017 album Red Pill Blues, but it didn’t really take over the airwaves until the band released a second version featuring Cardi B. The video for the song — which features dozens of powerful women including Camila Cabello, Aly Raisman, Gal Gadot, Lilly Singh, Tiffany Haddish, Ellen DeGeneres, Millie Bobby Brown, Chloe Kim, and Ashley Graham — topped Vevo’s list of the most-viewed videos of 2018.

15. “In My Blood,” Shawn Mendes: Shawn Mendes had several hits in 2018, but “In My Blood” was by far the most pervasive. Released as the lead single from the singer’s third studio album, the track describes Mendes’ struggle with anxiety: “Help me, it’s like the walls are caving in / Sometimes I feel like giving up / No medicine is strong enough / Someone help me.” He performed it on multiple talk shows and awards shows, including the 2018 Billboard Awards and the 2018 VMAs.

17. “The Middle,” Zedd, Maren Morris, and Grey: There’s a good chance you had this song stuck in your head at least once a week, every week, for the past 12 months. Even though it was released in January, it finished the year at number one on two different Billboard charts, and in the top 10 on two others. It’s also nominated in three categories at the 2019 Grammys.

18. “Boo’d Up,” Ella Mai: Newcomer Ella Mai broke out with her catchy love song “Boo’d Up,” the first single from her self-titled debut album. Although the track was originally released as part of an EP in 2017, it blew up in 2018. Billboard even named it the third-best song of the year.

What songs did you play on repeat in 2018? Let us know @BritandCo!

Desiree O
Desirée O is a ‘Professional Bohemian’ who loves anything and everything related to the arts, entertainment, and pop culture. She ADORES being a ‘Newsy’ for Brit + Co, covering all of the latest tidbits of awesomeness that you want to read about. When she’s not writing, she’s either making messy art, going on long adventurous walks with her camera, or poking around over at bohemianizm (http://www.bohemianizm.com/). You can find out about Desirée O and her work at http://DesireeO.com/ or follow her on Twitter @DesireeO.
Best of 2018
Music
Best of 2018 Music
More From Music