Here’s Every Pop Culture Movie Reference in Ariana Grande’s ‘Thank U, Next’ Video 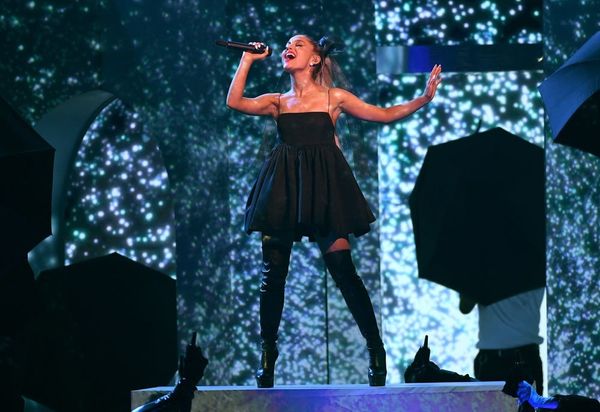 After days of social media teasers and behind-the-scenes clips and photos, Ariana Grande dropped the much-anticipated music video for her hit single, “thank u, next” on Friday, November 30. As promised, it’s full of meme-worthy movie references and celeb cameos. Watch the video below, and see if you can spot all of these pop culture Easter eggs.

1. The “Who is Regina George?” scene from Mean Girls.

As first teased on Instagram, the music video features a parody of the scene from Mean Girls in which various students share some of the legends and rumors about Regina George (Rachel McAdams). In this case, though, everyone is talking not about Regina George but about Ariana Grande.

“One time on Twitter, I heard Ariana was pregnant, so I got pregnant so we could be pregnant at the same time,” YouTuber Colleen Ballinger says. “Turns out it was just a rumor.” The camera then pans out to show Ballinger’s baby bump.

Bonus Easter egg: Jonathan Bennett, who played Aaron Samuels in Mean Girls, makes a cameo and references the line from the original movie about Regina/Ariana thinking his hair looks “sexy pushed back.”

In one of the first scenes after the intro, Grande — in full Regina George mode, complete with a blonde wig — lies on her bed while adding pictures and notes to her “Burn Book,” which, in the film, Regina and the Plastics used to make fun of people they didn’t like. Grande’s version of the book has the same title as her song and includes references to some of her famous exes, including Pete Davidson, Big Sean, Ricky Alvarez, and the late Mac Miller.

In a scene meant to echo the Plastics’ Christmas performance, Grande takes center stage alongside Ballinger, Gabi DeMartino, and Lindsay Lohan look-alike Elizabeth Gillies, who costarred with Grande on Victorious. As in the film, the ladies wear sexy Santa-inspired costumes to perform a choreographed dance, which combines the Plastics’ original routine with some new moves specific to “thank u, next.”

The scene is capped off with an appearance by none other than Kris Jenner, who steps into Amy Poehler’s former role as a “cool mom,” not a “regular mom.”

4. The tooth-brushing scene from Bring It On.

In the next verse, Grande re-creates the bathroom scene between Torrance (Kirsten Dunst) and Cliff (Jesse Bradford) from Bring It On. Fellow Victorious alum Matt Bennett plays Grande’s love interest, who flirts with her as they stand side by side, brushing their teeth and exchanging playful, telling glances. Who knew spitting out toothpaste could be cute?

5. The mixtape scene from Bring It On.

The Bring It On fun continues with a reference to the mixtape scene from the movie, when Torrance starts dancing in her room to a song Cliff wrote for her. In the movie, the tape read, “To Torrance, From Cliff.” But in Grande’s version, it’s “To Ari, From Ari.” (And we’re so good with that.)

6. The cheerleading rivalry from Bring It On.

The singer swaps her mic for pom-poms to cheer against the Clovers, a rival cheerleading team. Ultimately, though, while there are a few competitive moments between the two squads, the women are more interested in teaming up than bringing each other down.

The uniforms for both squads are almost identical to the uniforms worn by the Toros and the Clovers in the movie, with one notable difference: Grande’s uniform reads “TUN” for “thank u, next.”

During the next verse, as Grande sings about walking down the aisle, we see her walking away from a wedding with a dollhouse in her arms — a reference to 13 Going on 30, when Jenna (Jennifer Garner) runs after her childhood BFF Matt (Mark Ruffalo), only to learn he’s about to marry someone else. Grande carries the dollhouse next door, where, as she cries over her missed opportunity, some leftover wishing dust swirls around her.

Ruffalo reacted to Grande’s video on Twitter with a reference of his own, writing, “Having some Razzles (it’s a candy AND a gum) in your honor, @ArianaGrande!”

Having some Razzles (it’s a candy AND a gum) in your honor, @ArianaGrande! #thankunext https://t.co/5QA1pNtbiO

8. The Elle at Harvard montage from Legally Blonde.

While the wishing dust in 13 Going on 30 took Jenna back to her childhood so she could redo things with Matt, the wishing dust in “thank u, next” takes Grande to Harvard, where she channels Reese Witherspoon’s iconic Legally Blonde character, Elle Woods, complete with a sweet little pup and orange MacBook. There are references to several scenes from the movie in this section (including Elle’s elliptical workout and arrival at Harvard), not to mention a blink-and-you’ll-miss-it political statement.

9. The “Bend and Snap” scene from Legally Blonde.

Toward the end of the song, the video cuts to a scene in a nail salon, where Grande sits opposite none other than Legally Blonde actress Jennifer Coolidge, who reprises her role as the beloved nail artist Paulette. “I mean, he was really cute. And it was really big,” Grande tells Coolidge, who replies, “Well, I’ve only gone out with one guy that had a big front tooth. And I liked it, because he never got anything stuck in the front teeth.”

That leads into a montage of scenes from all of the aforementioned rom-coms, including the grand finale: the “Bend and Snap” scene from Legally Blonde. There’s even an appearance from a handsome delivery man who works for — wait for it — BDE.

Which of the four movies referenced in Ariana Grande’s video is your favorite? Let us know @BritandCo!

Desiree O
Desirée O is a ‘Professional Bohemian’ who loves anything and everything related to the arts, entertainment, and pop culture. She ADORES being a ‘Newsy’ for Brit + Co, covering all of the latest tidbits of awesomeness that you want to read about. When she’s not writing, she’s either making messy art, going on long adventurous walks with her camera, or poking around over at bohemianizm (http://www.bohemianizm.com/). You can find out about Desirée O and her work at http://DesireeO.com/ or follow her on Twitter @DesireeO.
Music
Music
Music Nostalgia