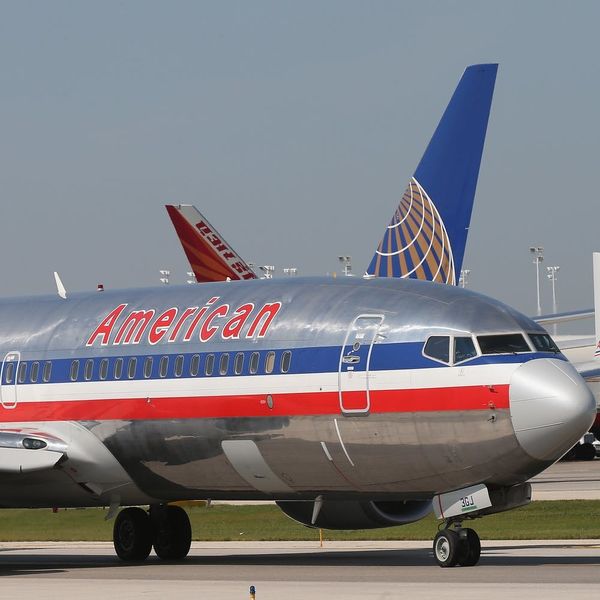 Flying is becoming an increasingly stressful ordeal. After a nightmarish week for United Airlines, during which a passenger was forcibly dragged off a flight, an engaged couple was removed from a plane headed to their wedding, and a man was stung by a scorpion, yet another flying scandal is making headlines. United is in the clear on this one, with the latest airline dramz involving a mother and her two children on American Airlines. Only this time, the company responded in a prompt and efficient manner, giving United (and the rest of us) a lesson in how to handle a PR crisis.

The altercation occurred on American Airlines flight 591, which was scheduled to fly from San Francisco to Dallas. While passengers were boarding, a mother boarded the plane with her two children and a stroller. Reportedly, a male flight attendant scolded her for bringing a double-wide stroller on board a single-aisle flight, as the airline’s rules state that strollers must be checked at the gate. Fellow passenger Surain Adyanthaya videotaped the unbelievable incident that followed, as things got heated when the attendant forcibly took the stroller from her when she tried to “jam it down the aisle.” In doing so, he allegedly hit her, barely missing her baby.

#AmericanAirlines flight attendant violently took a stroller from a lady with her baby… hitting her!! ✈️😡 pic.twitter.com/fCZc6EldR4

The mom was left crying uncontrollably in the aisle, as a male passenger stepped in and began asking for the flight attendant’s name before declaring: “Hey bud, hey bud, you do that to me, and I’ll knock you flat!” At that point, the crew member challenged the passenger to hit him and a near brawl occurred. OMG.

Whether they learned from the United fiasco, or simply have a well-thought out crisis management plan, however, AA wasted no time issuing an apology, grounding the flight attendant immediately after the plane landed in Dallas and reaching out to the mother to take care of her as best they could. “We have seen the video and have already started an investigation to obtain the facts,” the airline said in a statement issued a mere 20 minutes after the shocking video began circulating. Rather than placing blame on the customer for breaking the rules, they acknowledged the misstep of their employee for using force, saying, “What we see on this video does not reflect our values or how we care for our customers…The actions of our team member here do not appear to reflect patience or empathy, two values necessary for customer care. In short, we are disappointed by these actions. The American team member has been removed from duty while we investigate this incident.”

The airline also ensured that the woman and her family would be more than comfortable aboard their next flight, saying, “We are making sure all of her family’s needs are being met while she is in our care. After electing to take another flight, we are taking special care of her and her family and upgrading them to first class for the remainder of their international trip.”

“We are deeply sorry for the pain we have caused this passenger and her family and to any other customers affected by the incident,” the airline said.