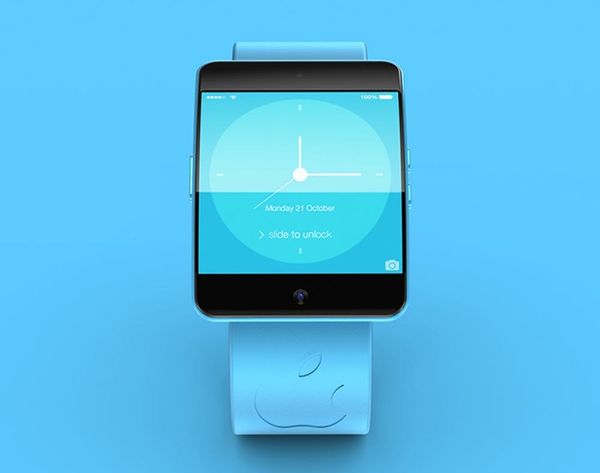 Today is going to be a big day for Apple. Um, and for all of us. Not only is it the day that we will finally unveil the iPhone 6 and confirm all those rumors we’ve been totally buying into. It’s also the day that we (hopefully) get a glimpse at the mythical beast that is the iWatch, Apple’s answer to wearable tech.

1. Sleek, Screen-Filled Bracelet: This slim bracelet incorporates a high-def screen that reminds us exactly of our iPhones, which is kind of the point. Minimal buttons, a touch screen and a simple tap to use Siri are all thoughtful features we’d love in real life. (via Todd Ham)

2. If Apple and Nike Teamed Up: An iPhone/FuelBand hybrid was the inspiration for the design above and we can see the similarities. While we’re a little confused by the orientation of the screen (reading horizontally while the bracelet sits vertically) we really like the smooth transitions between the screens and the dark design of the band. Would we wear it on a regular basis? That remains to be seen. (Via Thomas Bogner)

3. Classic Style, New Technology: We love how this concept artist took his craft so seriously, he even designed a classic Apple online advertisement to go alongside his idea. And with this much detail to show, we don’t blame him. Dominic Waring takes the classic round-faced watch with a thin band, updating it with a smart touch screen and tiny camera. Add Facetime, Maps and an actual clock face and you have a seamless intersection of new and classic. (via Behance)

4. For the Colorful: We get that the new iWatch probably won’t be able to please everyone, but boy are we glad to see that at least someone has included a bit of color in their design. No offense to the other gorgeous wearable concepts out there, but all that black and white can get super dull. We already feel more energetic looking at this bright “iWatchC,” taking its inspiration from the colorful iPhones released last year. (via Martin Hajek)

5. Futuristic Chic: This watch probably is better suited for humans of the future rather than those of in 2014. The sci-fi inspired design features a slim plastic band reinforced with glass. According to the video it comes in several colors, but we think our favorite is the plain white version with a tiny complete iPhone screen worked into the interface. Is it that much different from taking our phone on the go? Who knows? All we know is we doubt that will will stop us from wearing one anyway. (via Ciccares Design)

6. Small, Square and to the Point: This concept from Set Solutions demonstrates just how small an iWatch could be and how it would function on such a scale. The 2.5-inch touch screen is fully functional, high-resolution and made of reinforced glass. We really like the attention to detail in the arched curve of the rectangular face, making it easier to fit around any wrist. (via Set Solutions)

7. Bands to Match Your Mood: Interchangeable watchbands to match our outfits? If Apple actually used this concept, they’d really steal our hearts. Smooth polyurethane bands come in neon green, pink, blue and red, along with the traditional black and white. They pair with brushed stainless steel watch faces, which display features like iMessage viewing, Facetime, Siri, a compass, and more. (via Stephen Olmstead)

8. Dark and Rugged: Essentially a supersized watch face with an iPhone screen attached, this isn’t the most innovative idea we’ve seen, but it’s certainly functional. And we’ve gotta say there’s something endearing and kind of cool about its no-nonsense, rugged look. We’d totally get it for dad for Xmas. (via Antonio de Rosa)

9. Solar Powered Silver: How about a solar powered watch that never needs to be plugged in? Yeah, we’re pretty stoked about it too. At only three centimeters wide this may be the thinnest watch in the roundup, but the curved screen and raised volume buttons on the band make sure you’re not missing out. Our favorite feature? The slap-on inspired wristband that looks like those bracelets you’d play with in middle school. Only much cooler and probably much more expensive. (via Yanko Design)

10. Project Your Day: What can we say? iPhone concept art just gets better when you throw in some holograms. This genius idea imagines a watch that displays important messages, photos, maps and whatever else you need onto the air or any surface in front of you. Oh, and in this magical world, you can touch the hologram screen itself, rather than the watch, to run commands. If this is the future, we love it. (via Final Cut King)

11. Old School Charm: This idea is definitely one of the most stylish we’ve seen, thanks to a rustic leather band and a metal analog face that reminds you of your grandfather’s watch. It also most seamlessly blends technology and function with looks. All the apps work against the same dark background, and subtle buttons on the side let you navigate through them easily. (via Gabor Balough)

12. Loud and Clear: A clear mystery material (graphene, perhaps?) serves as the base for a near transparent touchscreen that blends seamlessly into the background of your skin. This is getting dangerously close to the biotech from your scariest science fiction, but for now we’ll leave the creepiness aside to appreciate the craftsmanship of this look. (via Vene Studio)

13. All About the Apps: These slightly bulky screens may not be as thin or stylish as you’d want your watch to be, but they do have one very important feature: plenty of visual space to interact with apps. We also dig this concept’s nod to the health apps everyone’s been talking about for the new Apple wearables. If they look at all like these ideas do, we’ll be very happy campers. And runners. (via Mindspi Vision)

Are you going to try the iWatch as your next (or first) wearable? Which of these concepts above are your favorites? We want to hear your thoughts in the comments!

Nora Landis-Shack
Nora is a writer, photographer, foodie and feminist. After living in New York City for 23 years, she recently moved San Francisco and can't wait to explore. When she's not pursuing her interests in health and technology, she loves hiking, yoga, playing piano and squealing over kittens as an ASPCA volunteer.
Apple
Tech
Apple Design iPhone leather
More From Tech