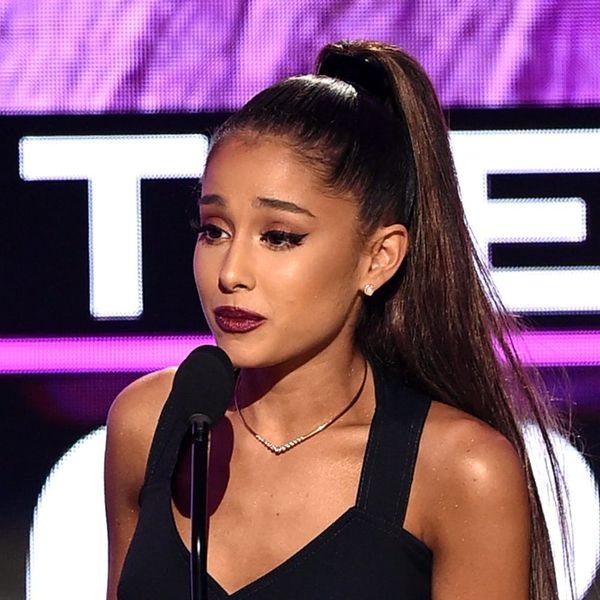 Just a few short hours ago, tragedy struck when an explosion took place at the end of an Ariana Grande concert in Manchester, England. At least 19 people have been reported dead, with at least 50 more injured in what is being hailed as a possible terrorist suicide mission.

With 21,000 people reportedly in attendance, hearts around the world are broken for those involved and their families. Grande has just released a statement via Twitter, following the many musicians and celebrities the world over who are shattered over the event. See their tributes below.

broken.
from the bottom of my heart, i am so so sorry. i don't have words.

1. Ariana Grande: Grande expressed her deepest regret and admitted that tonight’s events have left her broken. “I am so, so sorry,” she said. “I don’t have words.”

My thoughts, prayers and tears for all those affected by the Manchester tragedy tonight. I'm sending all my love.

2. Taylor Swift: Swift, who hasn’t Tweeted since January 29 to promote her single for Fifty Shades Darker, broke her social media silence to send her love to all of those affected by the tragedy.

3. Katy Perry: Swift’s rival Katy Perry also issued a Tweet on tonight’s events, saying that she was broken-hearted for the families, Grande, and the state of our world in general.

what happened in Manchester tonight is absolutely horrible. sending my love and prayers to those affected. 💔

4. Kendall Jenner: The supermodel took time out to send her thoughts and prayers.

5. Kesha: The singer shared a snapshot of herself giving Grande a hug in happier times.

My thoughts and prayers go out to everyone affected in Manchester.

6. Selena Gomez: Gomez also offered up her thoughts and prayers to all those involved.

My heart hurts for my sister, Ariana & every family affected by this tragic event in the U.K. Innocent lives lost. I'm so sorry to hear this

7. Nicki Minaj: Minaj, who of course performed with Grande on her hit single “Bang Bang,” called Grande her sister and expressed her deepest condolences.

Thoughts, prayers and my whole ❤️ are with Manchester this evening.

8. Jennifer Lopez: J.Lo said that her whole heart was with the city tonight.

I'm heartbroken over what happened in Manchester tonight.
Sending love to everyone involved. H

9. Harry Styles: The newly solo artist took to Twitter, saying that he was heartbroken to hear the news.

Tearing up imagining innocent concert goers losing their lives.. praying for everyone and all #arianators. 🙏🏼🙏🏼🙏🏼

10. Demi Lovato: Lovato was in tears over the reports and the fact that concert-goers are losing their lives. Us too, girl. Us too.

every musician feels sick & responsible tonight—shows should be safe for you. truly a worst nightmare. sending love to manchester & ari

11. Lorde: Lorde explained that this event hit artists hard, as concert-goers should be safe at every show they see. “Every musician feels sick and responsible tonight,” she wrote.

Devastated by the news of what happened in Manchester at @arianagrande's concert. Sending my thoughts and prayers to everyone affected.

12. Christina Aguilera: Aguilera, who, like Swift, rarely Tweets these days, also came out of the woodwork to express her sorrow.

HERE'S ONLY A FEW MISSING PEOPLE AT THE CONCERT. PLEASE PLEASE PLEASE RT TO HELP THEM GET FOUND!!!! #ManchesterArena #RoomForManchester pic.twitter.com/OyEhQ21GM9

13. Pink: Pink not only Tweeted her condolences, but helped to spread the word about those still missing, retweeting their images and info.