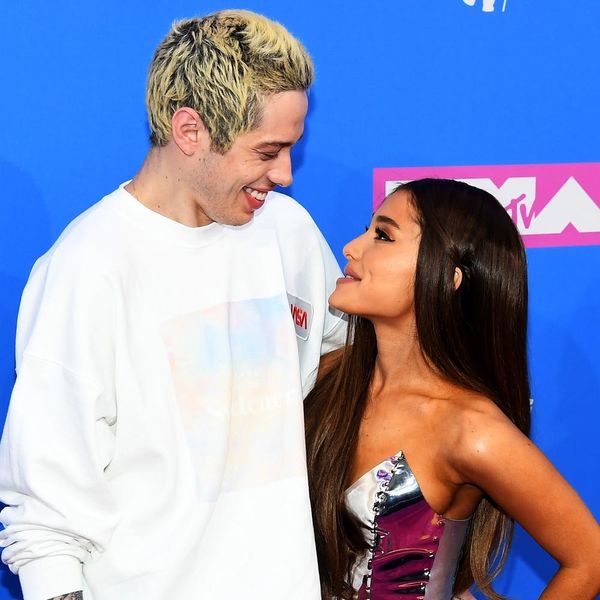 Newly engaged couple Pete Davidson and Ariana Grande just made their relationship red carpet official! Or should we say pink carpet official? The couple made their debut at the 2018 MTV VMAs in New York City on Monday, August 20, just three months after they first went public with their romance, and two months after Davidson popped the question.

Grande stole the show in a futuristic silver getup — complete with silver nails, thigh-high glittering boots, and her massive engagement ring from Davidson — but eagle-eyed fans noticed a special accessory on the comedian’s wrist, too: a beaded bracelet with the letters AGD and a heart, which some think is a reference to Grande’s plan to change her name to Ariana Grande-Davidson.

The “Sweetener” singer and the Saturday Night Live cast member hit the pink carpet with some sweet PDA before heading into the ceremony, where Grande is nominated for five awards. She’ll also take the stage to perform her hit “God Is A Woman” during the live telecast.

The couple’s awards show debut comes just days after Grande told Tonight Show host Jimmy Fallon that she predicted she would marry Davidson after a brief encounter at SNL in 2016. “We never, like, exchanged numbers or anything. We weren’t even friends for a long time,” the “No Tears Left to Cry” singer told the late-night host. “But I had the biggest crush in the whole world on him the whole time, like, forever. My friends used to make fun of me for it, all that stuff.”

She continued: “I left his writers’ room when we were writing skits and stuff for the show, and my tour manager was in the hallway, and I’m not a crushy person, like I don’t have crushes on people I don’t know. But I left and I jokingly said to my tour manager, ‘I’m marrying him. 100 percent. I’m literally marrying him.'”

And she literally is.

What do you think of Pete Davidson and Ariana Grande’s red carpet debut? Tell us @BritandCo!

Kat Armstrong
Kat has been a writer, social media maven and mom for longer than she's willing to admit. She's also spent time in front of and behind the camera, interviewing celebs, politicians and acting as a producer for fashion and artistic photography shoots. When she isn't writing for various orgs and publications, she's hanging with her kids, husband and French Bulldog, Peter, in Toronto, Canada.
Awards Shows
Celebrity News
Awards Shows Celebrity Couples VMAs