What You Need to Know About the Most Popular Artificial Sweeteners 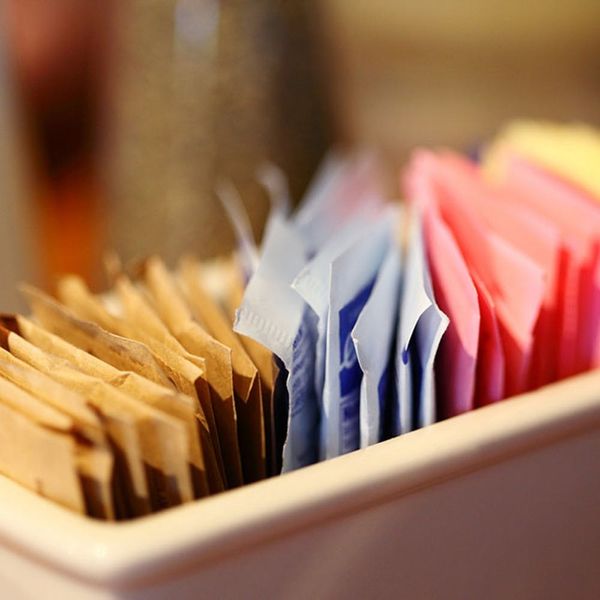 Sugar: It’s not so sweet. It wages a war on your waistline, screws with your skin, and could even encourage cancer cell growth. But its artificial counterparts, lauded for their versatility and lack of calories upon being discovered in the late 19th century through the end of the 20th century, might not be so pleasant either. (There’s a reason you hear people say that regular soda is better for you than diet soda, despite the name.) Disguised with simpler, enticing names and in pretty packets, artificial sweeteners including saccharin (AKA Sweet’N Low), acesulfame potassium (AKA Sunett or Sweet One), aspartame (AKA Equal or NutraSweet), sucralose (AKA Splenda), and neotame (AKA Newtame) can be found on the tables of just about every restaurant in the US.

Caleb Backe, health and wellness expert for Maple Holistics, a company that creates all-natural health and hygiene products, says despite their ubiquity, these products should be consumed cautiously. “You don’t want over-the-top artificial anything to be in your system,” Backe says. “Even if the FDA has deemed it safe for consumption, you still have the responsibility to look after yourself.” He explains that each person’s lifestyle, diet, and any potential medical conditions can affect how his or her body responds to these chemical compounds, but they have been linked to obesity, diabetes, and cardiovascular diseases. According to Backe, a sweetener can be differentiated from the others in four ways: sweetness as compared to sugar, uses, calorie content, and history with the FDA. Let’s take a look.

FDA History: Saccharin was first discovered in 1879. When a study suggested a link between saccharin and cancer in rats, Congress required that a warning label be placed on products containing the sweetener. In 2000, the National Toxicology Program of the National Institutes of Health concluded it was not a potential carcinogen and allowed the warning label to be removed.

FDA History: The administration approved the use of acesulfame potassium, also known as Ace-K, in certain drinks and foods in 1988, and it was approved as a general-purpose sweetener in 2003.

FDA History: In 1996, the FDA approved aspartame as a general-purpose sweetener; it had previously been approved for certain foods and beverages in 1981 and 1983, respectively.

FDA History: Sucralose was approved for use in 15 food categories in 1998 and was approved as a general-purpose sweetener just a year later in 1999.

FDA History: This sweetener was approved as a general-purpose sweetener and flavor enhancer for foods aside from meat and poultry in 2002.

Backe underscores that even after decades of studies regarding each of these sweeteners, nothing is certain. “It seems you can’t win with sugar or sugar substitutes,” he says. “Some have more advantages than others, it’s true, but the only viable answer is to consume in moderation and be aware of what you are putting into your system.” Alternately, non-artificial sweeteners Backe suggests are agave syrup, honey, maple syrup, molasses, malt, and date sugar. But as always, he emphasizes moderation. “Just because a substance is healthier, it does not make it healthy by definition.”

Where do you stand on artificial sweeteners? Let us know @BritandCo.

Annamarie Higley
Annamarie is a Californian who's been plopped in the middle of Missouri for her undergraduate studies in magazine journalism. She's a hiker, an eater, a lover of words. In her opinion, nothing beats a well-made breakfast sammy or a well-crafted sentence.
Diet
Health
Diet Healthy Living Womens Health