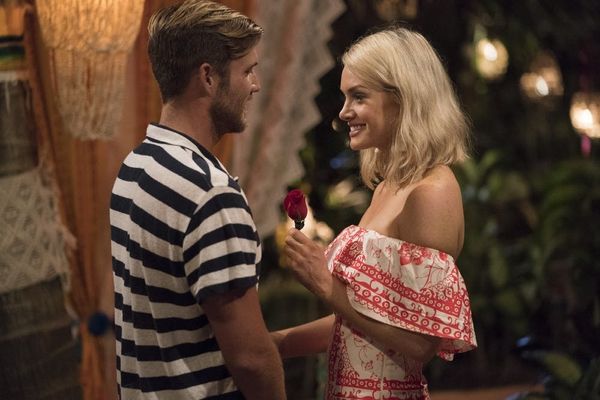 Another summer in Paradise has come and gone. While one season 5 contestant, Colton Underwood, nabbed a Bachelor leading-man role following his departure, and Joe “Grocery Store Joe” Amabile will be on Dancing With the Stars season 27 this fall, a few other cast members finished the season by getting engaged.

During the two-part BIP finale on Monday, September 10, and Tuesday, September 11, two couples put a ring on it: Jordan Kimball and Jenna Cooper, and Chris “The Goose” Randone and Krystal Nielson.

At the reunion, which was filmed weeks after the show finished shooting in Mexico, Kimball and Cooper revealed that they’d already picked a wedding date: June 9, 2019. They even pitched a TV wedding and asked host Chris Harrison to officiate. (He said yes!) Shortly before the reunion aired, though, reports surfaced that Cooper may have been carrying on a relationship behind Kimball’s back. She denied the cheating allegations, but Kimball admitted to People that he is struggling with the rumors.

“If this whole thing sticks, and it’s true, I will be hurt much more than the depths of romance,” he said. “I will be hurt as a person and as a friend. There are so many layers to a relationship and right now I feel all of them peeling back.”

Nielson, meanwhile, celebrated her on-air engagement to Randone by accepting his proposal during the reunion and excitedly telling the camera, “I’m going to be Mrs. Goose!” The couple said they plan to move in together soon, and Nielson’s mom said from the audience that she was “looking forward to a flock of baby geese.” Aww?!

It wasn’t all happily-ever-afters on the finale, however: Kamil Nicalek and Annaliese Puccini, who were still dating when they left Mexico, broke up on camera at the reunion. “I know Annaliese is ready for a guy to get down on one knee right now to get engaged, but you deserved the best and I think I might not be the guy for you, because I just feel like I kind of lost that spark we had in Paradise after leaving,” Nicalek told a stunned Puccini. “It’s just not working out for me. I think it would be best for us to just slowly part ways.” Ouch.

What did you think of the Bachelor In Paradise finale? Let us know @BritandCo!

Nicole Villeneuve
Nicole is an entertainment and lifestyle writer covering pop culture, news, and cool women doing cool things. She likes yard sales, MTV's Teen Mom, and putting too many memes in the group chat. She lives in Toronto.
The Bachelor
TV
The Bachelor The Bachelorette TV