Your Travel Guide to Living La Vida Loca in Barcelona 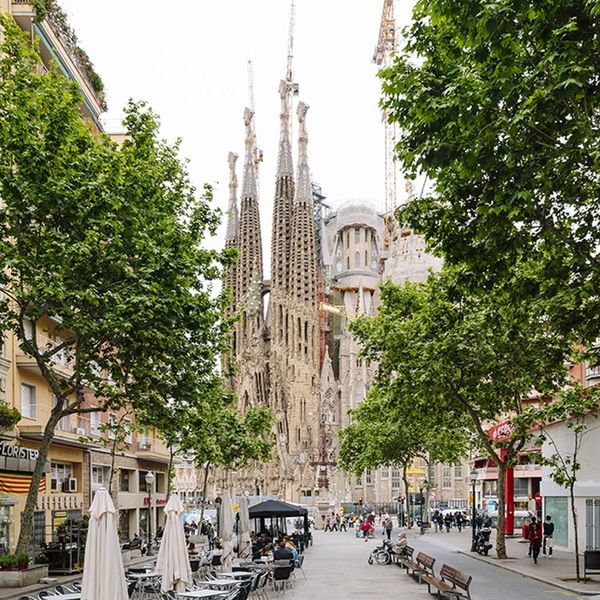 For this edition of our European city guides, we’re trading in Rome’s Eternal City (and endless servings of pasta and wine), for Spain’s City of Counts, better known as Barcelona. In our journey west, we’re trading in la dolce vita for la vida loca. And the description is apt: It is a feat of endurance to merely keep up with the boisterous energy of Spain’s famed coastal city. (New York may be known as the city that never sleeps, but Barcelona gives the Concrete Jungle a run for its money.) The electric energy of this Catalonian capital overlooking the Mediterranean is irresistible day into night, midnight fiesta into (much-needed) afternoon siesta, with culture and a nightlife that makes you want to stay awake all day (and night) long. Read on for where to eat and drink, where to stay, and what to do in this gorgeous Spanish oasis.

As far as luxury is concerned, we recommend the W Barcelona and its floor-to-ceiling windows overlooking the sea, or the ideally locate Majestic Hotel and Spa. The palm tree-lined façade of Four Points by Sheraton Barcelona Diagonal is another appealing option, as is the Secotel Amister Art, part of the Ascend Hotel Collection and a pick in walking distance of both the Barcelona Zoo and the Sagrada Familia. Hotel SOFIA Barcelona is also ideally located in the middle of the Avinguda Diagonal, and provides a chic and sophisticated backdrop for your European getaway. For spring and summertime, we suggest Hotel Barceló Raval, if only to enjoy the hotel’s spectacular rooftop bar, which offers amazing views of the city at night. Our final choice, the Mandarin Oriental Barcelona, is situated along the Passeig de Gràcia, a grand avenue that is one of the most famous spots in Barcelona. This five-star hotel not only boasts one of the most coveted addresses in the city, but it comes with a Michelin-starred restaurant. Lest you be tempted to spend all your meals in your hotel, the Mandarin has got you covered with a Barcelona for Foodies city tour that provides a taste of the local culinary scene. (For those looking to live like a local, Airbnb and Love Home Swap are perfect for travelers who want to experience a home away from home.)

For the best views of the city, look no further than the Bunkers del Carmel. Speaking of #views, head to Tibado, a stunning church on a mountaintop offering a spectacular panoramic vista of the city. For culture, look no further than the renowned Museu Nacional d’Art de Catalunya (also known as the MNAC museum), and be sure to check out the Montjuïc magic fountain show (replete with lights) at its entrance.

Something to avoid? Crowds. Selfie-taking tourists (like yourself, don’t lie) can ruin even the most transcendent feat of architecture or the light-dappled cobblestone streets on an early Spanish afternoon. One way to avoid the crowds is by booking a day tour with City Wonders, which just expanded its services into Barcelona last year. A guided expert tour is the best way to learn a lot (and feel less rushed and overwhelmed), whether you’re taking in a UNESCO World Heritage Site or paying a visit to the medieval monastery perched atop the breathtaking mountaintop of Montserrat.

Art and design-lovers should sign up for an architecture tour of the works of Antoni Gaudi, though you don’t need to be an art history major to appreciate his whimsical and weirdly wonderful masterpieces, Casa Batlló and Casa Milà, also known as La Pedrera. Other can’t-miss sites include the Barcelona Zoo, along with Gaudi’s colorful Park Güell and stunning (and still unfinished) Roman Catholic church, La Sagrada Familia.

WHERE TO EAT & DRINK

In this nightlife-loving city (where dinner can sometimes start at 1m), let’s start at a very important meal of the day: Brunch. If you’re thinking juices and health, look no further than Flax & Kale. If you’re thinking Marie Antoinette-style “let them eat cake,” and want to try out your influencing skills on social media, head to the aptly-named Brunch & Cake.Alsur Café and Bo de B (a hidden gem that serves unbeatable sandwiches) are also good bets to start your day.

For dinner, we recommend the Spanish-style Italian cuisine of Tagliatella — their pasta and pizza and cava are all unbelievably delicious and very reasonably priced. Tapa Tapa is popular for a reason.

The city’s most famous market, La Boqueria, which sits in the middle of bustling La Rambla, is also full of tapas counters and food stalls selling everything from candy to fresh produce to cured jamon.

For drinks, try L’Ovella Negra. The bar comes equipped with long tables that are perfect for a big group of friends (and new friends and soon-to-be friends.) The ambiance is not dissimilar from a sophisticated beer hall, a cave for lushes, and we enjoy that very much, thank you.

Finally, a trip to Barcelona isn’t complete without a flamenco performance — and the Tablao Flamenco Cordobes is one of the most popular establishments. Kick back with a cool beverage of your choice and appreciate the beauty of the local culture and heritage as it expresses itself through movement. “Duende” is a Spanish term that defines a certain charm and magnetism amongst flamenco dancers, and we highly encourage you to adopt this word into your regular life at home too.

RELATED: The Ultimate Weekend Guide to Boston: 48 Hours in Beantown

Katherine Parker-Magyar
Katherine is a freelance writer focusing on travel, culture, lifestyle, and politics. Her work has appeared in The Week, Tasting Table, Elite Daily, POPSUGAR, and Electrify, among other publications. She's traveled to all 50 states and 40 countries, but calls New York City home. Follow along on Instagram at @katherineparkermagyar or visit her website at www.katherineparkermagyar.com.
Travel
More From Travel