The Ultimate Weekend Guide to Boston: 48 Hours in Beantown 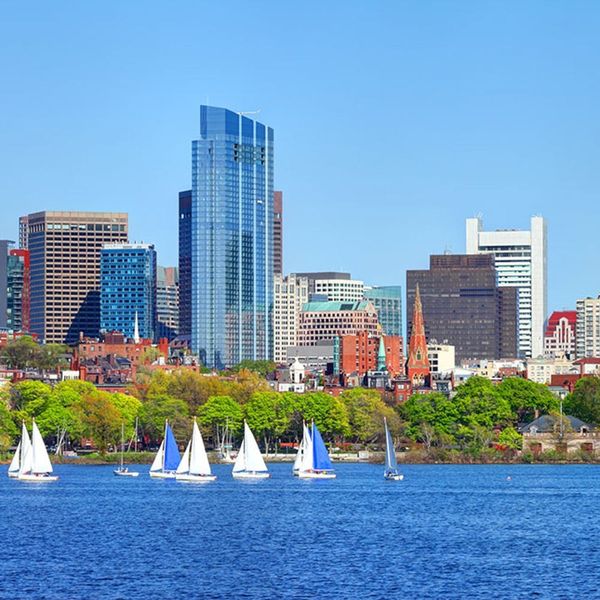 If you love cobblestone streets, waterfront cocktails, and American history, then Boston should be your next weekend escape. No car, no problem: You can easily take an Amtrak train or a Bolt Bus to New England’s fairest city. Though Boston has its charms year-round, if you’re not interested in sub-zero temperatures and parka-chic evening attire, plan your trip for early fall (or late summer if your schedule isn’t already full). The foliage, the dive bars, the Dunkin’ Donuts, the Red Sox — what’s not to love? Read on for your ultimate weekend guide to Beantown.

Book a stay at The Envoy Hotel right in the heart of Boston. Drop your suitcase in your room, then proceed directly to the rooftop bar for a sunset cocktail and a taste of the good life. You’ll be close to several popular local attractions, including Faneuil Hall Marketplace, where you’ll have no shortage of dining options. Another solid choice is Fairmont Copley Plaza. Steps away from Newbury Street, this hotel is perfectly situated to appeal to all shopping fanatics.

If you really want to live large, a swanky option to consider is the Beacon Hill Hotel, where gorgeous, luxury accommodations meet an historic, picturesque location that can’t be beat. If you don’t feel like splurging on a room, just go to the Beacon Hill Hotel for lunch in the bistro, a reasonable alternative that won’t make nearly as big of a dent in your bank account.

When Boston isn’t blanketed in snow, you have to take advantage of that crisp New England weather and enjoy some time outside. Sports fans won’t want to miss the chance to go Fenway Park for a Red Sox game. And in this charming city, experiencing a little bit of history is as easy as hitting the cobblestone streets right outside your hotel or Airbnb.

Stroll along the Charles River Esplanade to watch the sailboats drift by (or ice floes collect on the water, depending on the season). If you’re the type who likes to work out while on vacation, this is a great spot for a run. But if your idea of cardio involves walking from one store to another, head to Newbury Street instead to take your shopping obsession to another level.

To catch up glimpse of how the other half lives, we suggest walking by the regal townhouses of Beacon Hill. Even the window treatments hint at the homes’ quirky, glamorous inhabitants, as if everyone in that neighborhood is an extra in a Wes Anderson movie permanently donning a barrette and navy pea coat.

The North End and South End aren’t too shabby, either. Venture to the North End for the waterfront (and the cannoli), or visit the South End for even more Insta-worthy townhouses lining cobblestone streets. But our all-time favorite activity in Boston is walking the Freedom Trail, where you’ll learn fun facts about the Founding Fathers of our country that’ll come in handy at dinner parties. For example, did you know that John Adams started each morning with a glass of hard cider?

Speaking of John Adams’s daytime drinking habits, the activity remains very popular in Boston and leads us to our next few recommendations. Visit Cambridge, the Brooklyn of Boston, and stop by Bukowski Tavern, where we suggest you order the $10 deal for a 40 and a hot dog, quite possibly the greatest combination ever invented.

Or go to Stanza de Sigari, an old-school Italian cigar bar. Post up on a stool, keep your shades on, and pretend you’re in The Departed (a character who survives, hopefully). Despite the city’s best efforts to crack down on drinking regulations (such Puritans!), jazz brunch is still a thing in Boston. Start your weekend morning off at Beehive Boston to cast your vote for the drinking team.

Drinking is one of the city’s favorite pastimes — ever since the Revolution — so you’d be remiss not to visit some of Boston’s best watering holes. Try Drink Fort Pond or Oak Long Bar & Kitchen if you’re #fancy and prefer cocktails to tap beer. If you’re feeling an island vibe (even though you’re in New England), then Tiki Rock will hit the spot. The tropical drinks immediately put you in vacation mode, as does the A+ music selection (think: Destiny’s Child and Selena Gomez). The Met Back Bay is another guaranteed good time; this neighborhood institution is a solid place to hole up for an afternoon with a bottle of wine and the best grilled cheese available on the East Coast.

Let’s be honest, though: Boston is the city for college students and all things academia. Live like a college kid again at The Sail Loft, where you can dance to the Spin Doctors surrounded by throngs of guys in backward baseball caps. Another collegiate option is Harvard Gardens; the old-school wooden bar boasts a similarly fratty feel. If you’re visiting in December, be sure to appreciate their festive Christmas lights — you just gotta find the silver lining after shoveling your car out from under an avalanche of snow for the umpteenth time.

The Caddyshack-themed Bushwood Cocktail Club will keep those fratty vibes going. Once you’ve had your fill of college nostalgia, head to The Sevens in Beacon Hill for a truly classic dive bar. The dark, wooden ambiance provides a welcoming respite in winter, spring, summer, and fall.

Another beloved spot amongst local is Anchovies, which serves spectacular food as well. Hint: Order the Italian Nachos; you won’t be sorry. Italian cuisine is very good throughout the entire city and is particularly popular in the North End. Which brings us to the Italian subs at Monica’s Mercato Deli, which are not to be missed.

Our next choices are a couple of French restaurants that are perfect for date night. Located in the romantic neighborhood of the South End, Aquitaine is made for a romantic evening out on the town. Marliave is another très delicious option, with a Parisian-inspired menu that’s right at home in Massachusetts.

Finally, we’ve saved the best for last: SRV was named Best Italian Restaurant in Boston last year by Boston Magazine. It’s too soon to say for this year, but we suggest checking it out so you can weigh in.

What’s your favorite neighborhood in Boston? Tag us in your go-to spots on Instagram @BritandCo.

Katherine Parker-Magyar
Katherine is a freelance writer focusing on travel, culture, lifestyle, and politics. Her work has appeared in The Week, Tasting Table, Elite Daily, POPSUGAR, and Electrify, among other publications. She's traveled to all 50 states and 40 countries, but calls New York City home. Follow along on Instagram at @katherineparkermagyar or visit her website at www.katherineparkermagyar.com.
Carless Weekend
Travel
Carless Weekend Travel Vacation
More From Travel