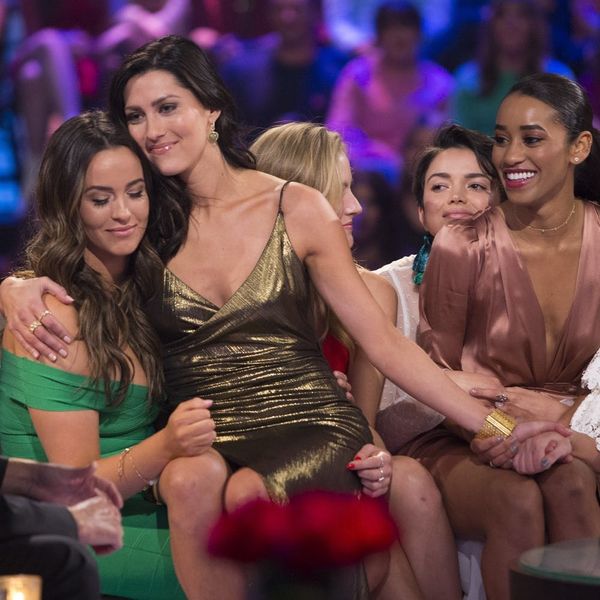 The Bachelorfinale and After the Final Rose special certainly made for a few hours of dramatic television. And while Arie Luyendyk Jr.’s decision to film his breakup with Becca Kufrin so he could pursue his runner-up, Lauren Burnham, was a total cringe-fest, the situation was redeemed not only by the show’s decision to make Kufrin the next Bachelorette, but by the power of female friendship we witnessed in season 22’s final moments.

When Chris Harrison made the not-so-surprising announcement that Kufrin would indeed lead The Bachelorette season 14, the studio audience went wild. Included in the crowd, of course, were some of Kufrin’s fellow season 22 contestants: Bekah M., Seinne, Tia, Kendall, and Caroline, who were all spontaneously brought up on stage to celebrate with their girl. After they hugged and cheered some more, all six of the girls squeezed onto the tiny loveseat together.

“She honestly is just the best human,” Tia said to Harrison. She and the rest of the girls were visibly emotional as they praised their friend’s selflessness and good heart. Kufrin called the posse her “soul friends,” and then quietly dropped the best line of not only the finale, but maybe the entire season.

“See?” she said, as she sat on Caroline and Kendall’s laps, squeezing Tia and Sienne’s hands. “I found love here.”

All of the girls gushed over their friendship on social media, with Bekah M. sending Kufrin off into Bachelorette land with a heartfelt note. “Becca, I’ve never met someone like you,” she wrote. “You are truly wonderful. You deserve this journey more than anyone I know. That being said, KNOCK EM DEAD THIS SEASON, SWEETIE!!!” Something tells us that won’t be a problem.

What did you think of the moment between the Bachelor girls on the finale? Let us know @BritandCo!