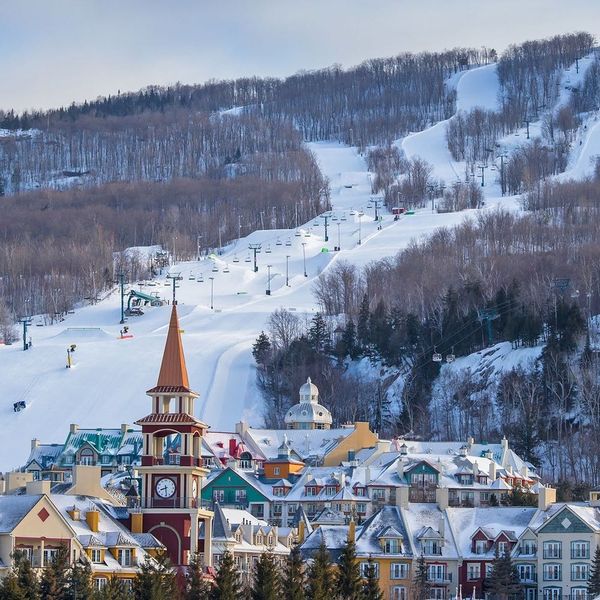 There are big changes brewing in the ski world these days: major mergers, greener business models, tons of development. The industry’s push to draw new and younger snow bunnies means chicer resorts, more cool activities, and a bumper crop of restaurants, bars, and spas to enjoy beyond the slopes (because, let’s be real: The party is at least half the fun). For the best of the après scene, look no further than these North American winter wonderlands and their beloved resorts — prior experience not required.

1. Jackson Hole, WY: Known as “The Big One,” Jackson Hole Mountain Resort is considered to have some of the toughest ski runs in the country — Corbet’s Couloir is a benchmark for excellence. That kind of cachet draws a particular type of skier that’s fearless and boisterous, on and off the slopes. Keep good company at the Pink Garter Theatre or the s-shaped Silver Dollar Bar at The Wort Hotel. (Photo via Travel Wyoming)

2. Eden, UT: Following a buyout and massive expansion last year, Eden’s Powder Mountain — long respected by serious skiers for its legit trails — is set to become the most happening winter spot. Luckily, the resort is capping daily tickets and season passes to keep the crowds under control. Get in while you can. (Photo via Powder Mountain)

3. Breckenridge, CO: Take away the skiing, and Breck’s nightlife would be enough to draw winter adventurers (the town did set the unofficial record for the world’s longest shot-ski, after all). Now, a slew of new bars and restaurants are taking the food and drink scene to tasty new heights. Go in February for Mountain Mardi Gras to see how the revelry goes down in the Rockies. (Photo via Breckenridge Tourism Office)

4. Banff National Park, Alberta, Canada: You know all those Instagram pics of a seemingly mythical turquoise, alpine lake? They’re probably from Banff. But this area isn’t just picturesque. The park has three killer resorts and a ton of après opportunities. Whatever you do, be sure to set aside time to skate on the Insta-famous Lake Louise. Afterward, settle into the rooftop hot tub at Deer Valley with views of the majestic Canadian Rockies. (Photo via Banff Lake Louise)

5. Snowmass, CO: If you’re torn between the glitzy possibilities of the big-time resorts and the laid-back vibe of independent ski areas, land somewhere between at Snowmass. Though it’s close to the flurry of activity in Aspen (10 minutes away), the village remains less crowded and provides superb amenities. This year, Snowmass Ski Area celebrates its 50th with activities, upgrades, and brand-new additions — like an alpine roller coaster. The Viceroy’s new 7,000-square-foot spa, designed by iconic architect Jean-Michel Gathy, is the perfect remedy for weary bones. You can ask the concierge to have your suit ready on arrival so you can go straight from skiing to soaking. (Photo via Viceroy Snowmass)

6. Sun Valley, ID: The very idea of ski vacations in America emerged at Sun Valley Resort. In the 1930s when its snow-loving owner debuted chairlifts, Hollywood flocked to the mountains in droves. Despite its lineup of illustrious fans (Ernest Hemingway, Steve McQueen, Marilyn Monroe — to name a few), Sun Valley is decidedly authentic — and friendly. (Photo via Visit Sun Valley)

7. South Lake Tahoe, CA: This city on the south side of Lake Tahoe sits right on the state line between California and Nevada, giving you the best of both worlds. At Heavenly Resort, you can enjoy the highest peak in Lake Tahoe and over 4,600 skiable acres crossing both states. And in the evenings, wander over to the Nevada side and enjoy the nightlife and/or test your luck at one of the big casinos like Harrah’s or Hard Rock. (Photo via Heavenly)

8. Park City, UT: Where can you ski with an Olympian, have a boozy bonfire in a snow cave, maybe even clink glasses with A-list celebs during the Sundance Film Festival in January? Park City, with its choice hotels and coveted events, seems to be the place where winter dreams are made. After a day at Park City Mountain Resort or the luxe Deer Valley (which is skiers only), you can head straight down to any number of bars on Main Street to reward yourself with a post-mountain nosh and drink. One great option is High West Saloon, which distills its own whiskey in town. (Photo via Getty)

9. Taos Ski Valley, NM: Most people think “north” when planning a ski escape, but they miss out on the Southwest’s charm. Taos Ski Valley, known to have some of the most technical skiing around, recently received a $350 million makeover for everything from the lodging to snowmaking to restaurants. While it looks all shiny and new, the chill Taos vibe isn’t gone. Skiers still gather at The Bavarian, which has been serving up pretzels and imported German beers since the nineties. (Photo via Taos Ski Valley)

10. Whistler, British Columbia, Canada: Whistler-Blackcomb Resort, with over 8,171 acres of terrain, is the largest ski resort in North America, so it’s no wonder that it attracts an energetic, international crowd. Whistler Village, at the base of the mountains, has a little something for everyone — whether you’re looking for a traditional French Canadian poutine or some late-night dancing, your options are boundless. (Photo via Getty)

11. Killington, VT: This New England hamlet tops every list of party towns for its raucous cluster of bars along Killington Road. For a totally different on-the-snow experience, catch an after-hours snowcat ride to the Motor Room Bar, a cocktail den housed in a retired lift station within Killington Resort. (Photo via Killington Resort)

12. Mont Tremblant, Quebec, Canada: For a taste of the European ski scene, make the trek to Mont Tremblant, a lovely little village in the French-Canadian region of Quebec. While the town may look all sweet and proper on the surface, the late-night dance parties at Café d’Époque, avid local brewery following, and the dancing on the bar that goes down at P’tit Caribou, would suggest otherwise. (Photo via Mont Tremblant)

Where are you going skiing this season? Tag us your après ski pics @BritandCo!

Stephanie Granada
Stephanie Granada is a freelance writer and editor, who splits her time between Colorado, Miami, and NYC. When she's not locked down in research-mode, reporting a travel story on the road, or identifying areas to bolster the Hispanic community, you'll find her playing outside, working out, or hiding out with a book. Happiness to her is hiking up a mountain, swimming in a beach of her native Colombia, powering through a hellish boxing class, or getting lost in a story with a glass of something delicious — preferably whiskey — in-hand.
vacation
Travel
vacation