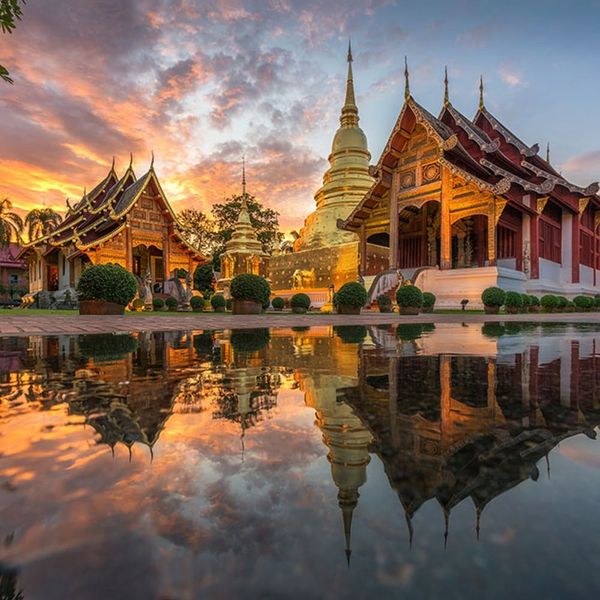 We all travel for different reasons: to catch a killer sunrise, to feel like a local in a foreign place, or simply because we need some TLC on a wellness vacation. But regardless of our motivation, we’re all happy to save a little dough when we’re on the road. One great thing about traveling globally is that there are all kinds of places to go where our money stretches further than it does at home. Scroll on for eight spots where the exchange rate might just inspire you to pack your bags STAT.

1. Vietnam: Southeast Asia is known for being an inexpensive destination for American travelers, and that definitely holds true for Vietnam. One dollar is the equivalent to about 23,250 Vietnamese dong, and you can find plenty of places to stay for less than $40 a night. While you’re there, visit the stunning Ha Long Bay, an UNESCO-designated area, for gorgeous rocky islands, or explore the Forbidden Purple City, which is the remains of a compound previously inhabited by emperors located within The Imperial City in Huế.

2. Chile: A dollar is equivalent to about 650 Chilean pesos and hotels can be found for less than $100/night. Certainly not the cheapest country on the list, but with chances to explore everything from Patagonia, home to the Andes Mountains, to Easter Island, a remote volcanic island which is a Chilean territory known for its archeological sites, the prices seem pretty reasonable.

3. Malaysia: The exchange rate for Malaysia — which is about four Malaysian ringgit to one US dollar — may not seem that impressive, but when you realize that hotels are under $40 and you can find a delicious meal for about five dollars, suddenly it’s quite the deal. Check out Hindu temples at the v. impressive Batu Caves, a national treasure, or keep it metropolitan in the Kuala Lumpur city center.

4. Uruguay: A dollar works out to about 30 Uruguay pesos, and you can expect to pay less than $70 for lodging. Take a stroll through the Plaza Independencia, which separates downtown Montevideo from the oldest part of the city, Ciudad Vieja, which is also worth a wander.

6. South Africa: The US dollar is worth about 13 South African Rand. Lodging is more expensive in South Africa, typically $75 and up per night (which is still far less than you’d pay at a lot of hotels in America), and meals are pretty similar in price to the US. But you’ll get to venture to unbelievably scenic spots like the Cape of Good Hope on the Atlantic coast and see the wildlife Africa is famous for at Kruger National Park.

7. India: There’s a reason so many people try to Eat, Pray, Love their way through India — it’s extremely inexpensive for Americans. A US dollar you will get you about 68 Indian rupees, and you can find many hotels for less than $40 and even as low as $17. Of course, no trip would be complete without a stop at the stunning Taj Mahal, and you can take a tour through The Red Fort in Delhi for a history-lesson-come-to-life you won’t soon forget.

8. Thailand: You’ll get about 33 Thai Baht for a US dollar, and hotels can be booked for less than $40 a night. Explore temples in Chiang Mai or bask in the sun on Phuket Island, where white-sand-filled, palm-tree-dotted beaches await. You can also get your zen on at one of the many affordable yoga retreats.

Where’s your favorite budget destination? Tag us in your Insta-worthy activities @BritandCo.