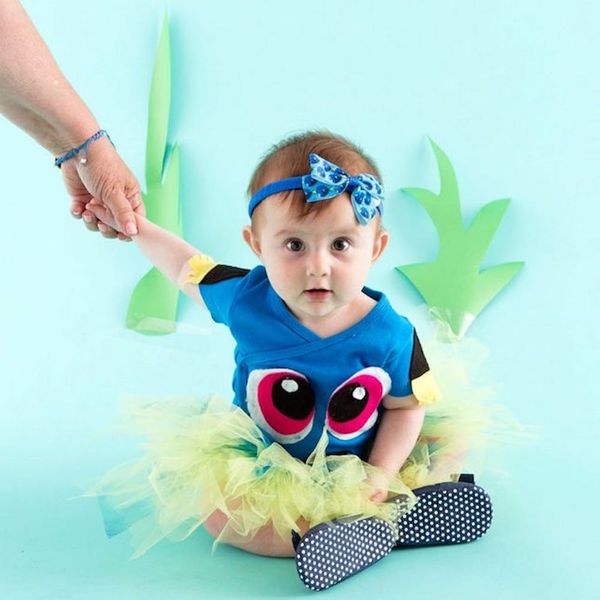 We have a passion for Pixar. From watching all the films multiple times in theaters to going gaga over these adorable Pixar-themed tattoos, we’re totally hooked — and definitely not ashamed. If you want to proudly fly your Pixar colors this Halloween too, we’ve got you covered, from an oh-so-cute baby Dory costume to a full-on Inside Out group costume tutorial and a *ton* of inspiration. Scroll through these 34 amazing Pixar Halloween costumes and get ready to take your love to the next level.

1. Violet from The Incredibles: This impressive costume definitely isn’t invisible (she must be saving her super powers for later). We love the inspired choice of a kickass female character.

The Peaches Toy Story Gang!!! Buzz, The Two Jessies, Buttercup the unicorn and Of course Barbie!! I have to say no matter what theme we give them The Peaches smash it every time!!!! 🍑🎃🍑🎃🎨

2. Toy Story Crew: This is truly like Andy’s toy collection come to life. From Buzz to Barbie, this group has got their Toy Story characters covered.

3. Inside Out: We know that being blue represents the character (and emotion) Sadness in the film, but — just like some of Sadness’s lines in the movie — this costume is hilarious. Right down to that downtrodden expression, it’ll be a hit at any party.

4. Darla from Finding Nemo: Could that be a Zombie-bite we see? Bonus points for adding in some gory Halloween details to this Pixar character’s getup.

5. Sully from Monsters Inc.: This is literally too cute for words. Meet “Big Sully” and “Little Sully” — the world’s cutest monster pair.

6. Buzz Lightyear from Toy Story: Buzz Lightyear… more like pure magic. This guy proves you don’t need a cast of characters to go to infinity… and beyond!

7. Up: Everybody loves dressing up as characters from Up! This pair did a great job of using details to make these costumes their own. Check out the mini-house, balloons and the dog!

8. Bo Peep from Toy Story: This is an impressive Bo Peep costume. Right down to the three-headed sheep, she truly looks the part. Now all she needs is her Woody.

9. Inside Out: There’s joy in channeling that anger… in costumes of course! Either go with these two characters or try our other Inside Out costumes. (via Brit + Co)

A very happy 23rd birthday to the Sulley to my Mike, my best friend and the man who has my heart! #nobodylikesyouwhenyoure23 #boyfriend #puppydaddy #love #birthday #23 #mikeandsulley #disney #pixar #costumes #disneycostumes #monstersinc #monstersinccostumes

10. Sully and Mike from Monsters Inc.: Their fierce monster grills can’t distract from the fact that this is a totally presh couples costume. Way to go with the DIY-inspo, guys!

11. Joy from Inside Out: Nailed it. We’re pretty sure that if Joy was modeled after anyone IRL, this is her.

12. Merida from Brave: Are you ready to embrace your girl power? Are you a natural ginger or have you always wanted to be a redhead for a night? Then Merida from Brave is the Pixar character for you.

13. Inside Out: Feeling blue? Seems like Sadness is everyone’s favorite emotion to dress up as. Maybe because it’s a super easy costume to DIY and Sadness had some hilarious lines in the movie that you can quote allll night long.

16. Dory from Finding Nemo: Guess what? If you’ve been dying to get creative with blue body paint, you don’t have to be Sadness. You can also dress up as the best goofy-fish ever, Dory!

17. Merida and Fergus from Brave: What a great way to remember your fatherly love. This cosplayer included Merida’s dad in the costume, and he has an amazing mustache.

18. Inside Out: This group of friends did a great job dressing up as our favorite Inside Out characters. Good call on the monochromatic shoes!

A post shared by Dangerous Pastime Cosplay (@dangerouspastimecosplay) on Sep 25, 2014 at 1:20pm PDT

19. Jessie from Toy Story: Here’s another great Jessie costume. She has the full-length cow-hide chaps and cowboy boots — not to mention, the red cowboy hat. Jackpot!

20. Inside Out Crew: What a great reenactment of one of Pixar’s best movies. We must admit we’re impressed with their commitment to full-face, arm and hand makeup.

21. Merida and the Bear Brothers: It’s two-for-one Pixar with this costumed bunch from Brave and Bear Brothers. Imagine how fun it would be to wear that wig! (via PopSugar)

22. Inside Out Family: How incredible is this family costume? They totally killed it with their simple, already-had-it-in-their-closets outfits, and you can tell they’re acting the parts too! (via Costume Works)

23. Toddler Up Costume: This is an adorable DIY we’d like to see many more of come Halloween. The DIY toddler-sized walker is super creative and will definitely be a neighborhood hit. (via How Does She)

24. Toy Story: Bring your favorite toys to life by dressing up as the classic team of characters. And don’t forget to write Andy’s name on the bottom of your feet in case you get lost. (via Rock Hill Daily)

25. The Incredibles: This incredible costume is super easy to DIY or buy, whichever works for your budget and schedule. It’s perfect for the family or a group of friends. (via Halloween Costume Ideas)

26. Baby Dory: This DIY is just too good to pass up. The only thing better than dressing your baby up as Dory is dressing her up as baby Dory! (via Brit + Co)

27. Army Men: All you need is a little paint and plenty of plastic to pull off this Toy Story-inspired look for under $20. (via College Lifestyles)

29. Fear: Channel fright night with Inside Out‘s Fear costume. Purple pants and face paint required. And, yes, we are afraid. (via Brit + Co)

Trick or treeeeaaat 🔵 It's my son's dream come true! Sadness DIY on the blog today. I ordered a lot of pieces from Amazon prime, so you still have time for Halloween!! That Sadness attitude though...you've gotta find that in your heart 😂#loveandlioncostumes #hweasycostume #brithalloween #sadness #insideout #disneyfamily

30. Sadness Kid from Inside Out: Awww… a mini-Sadness! If you’ve seen Inside Out, it’s no surprise why Sadness might be this kid’s favorite character. Follow the DIY tutorial here.

Speaking of Disney: It's Russell and the house from 'Up.' Impressive architectural job! #SDCC

31. House from Up: We love a good couples costume, and this one is especially adorable. Although, we’re still trying to figure out how she got into that dollhouse… anyone have any DIY ideas?

32. Toy Story: Get ready to go to infinity and beyond this Halloween. Feel free to add more characters depending on your family size. (via Mama Say What?!)

33. Incredibles: Not only is this one super easy, but it’s also perfect for all of those Pixar fans. We’re hoping to see many Pixar-loving families! (via Freshly Completed)

Did we forget any classic Pixar films? Let us know and show us your ideas on Pinterest!