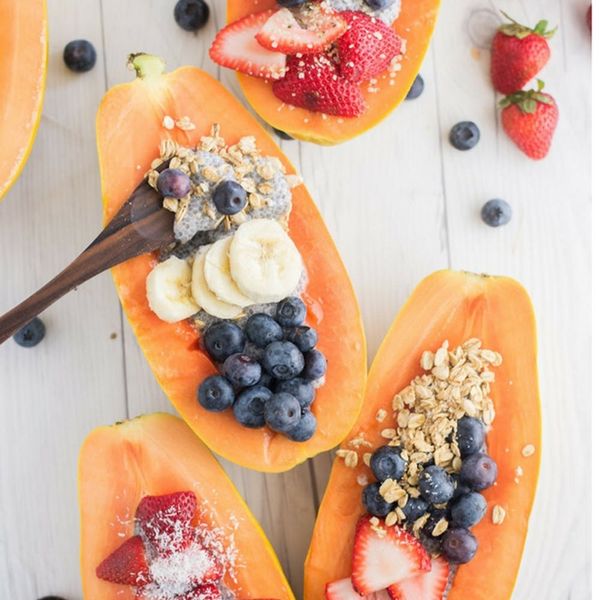 There's nothing particularly earth-shattering about someone saying they follow a vegan lifestyle. At this point it’s so common that you probably put jackfruit and tofu on your grocery list without even considering yourself to be vegan; the food is just that good. To prove that vegan recipes can please your taste buds just as easily as the most protein-packed meal, Brit + Co has been experimenting in the kitchen to bring you the 16 tastiest ways to go vegan.
Papaya Boats and Chia Pudding: Can't hop on a plane to the tropics on a whim? Give yourself a little taste of paradise with berry and chia pudding-filled papaya boats. That’s almost just as good. (Photo via Brit + Co)
Berry Ombre Smoothie: Almost too beautiful to drink, these smoothies are made from a medley of fruit, vegetables, and of-the-moment ingredients like blue algae, spirulina, beetroot powder, and turmeric. Basically they’re the easiest way to pack five a day into your diet. (Photo via Brit + Co)
Vegan Lemon Scones: Tangy lemon pastries are always in style. All you need is a good recipe in your back pocket to whip up some citrusy scones for any occasion. (Photo via Brit + Co)
Ube Horchata Latte: Ube is a purple yam from the Philippines that’s full of antioxidants and bestows a stunning hue to everything it touches. It also happens to make a delicious — and whimsical — hochata latte. (Photo via Brit + Co)
Watermelon Radish Salad: Pink watermelon radishes and golden beets star in this show. The greens merely play a supporting role and give each bite a bit of substance. Don’t worry; it doesn’t impede any of the beautiful flavor of the root veggies. (Photo via Brit + Co)
Cheesy Microwave Popcorn: This homemade popcorn is naturally already so good that a little sprinkling of nutritional yeast and spices makes a simply irresistible snack for any time of the day. (Photo via Brit + Co)
Oven “Fried” Falafel: Packed with protein-filled chickpeas as well as lots of herbs and spices, these flavorful falafels are traditional vegan fare that can serve as a hamburger patty or an appetizer. Forgo the yogurt sauce to keep things strictly vegan. You can always dip the falafels in hummus instead! (Photo via Nicole Iizuka / Brit + Co)
Veggie Grain Bowl: Introducing a slow cooker grain bowl that can be the basis for your balanced diet. It's filled with quinoa, sweet potatoes, and black beans, so each bite will be not only nutritious but also filling. Naturally, you'll want to leave off the sour cream to make this vegan. (Photo via Brit + Co)
Kimchi Tofu Ramen: Stovetop ramen can be hearty and satisfying. Just select a few fresh ingredients to supplement your noodles. Pro tips: Skip the egg to keep it vegan. Add in a spoonful of kimchi and you’ll really boost the nutrient content and flavor profile of this easy dish. (Photo via Brit + Co)
Jackfruit Tacos: Pair versatile jackfruit with fresh radishes, bright cilantro, and creamy avocado for a dish that's lightweight and yet filling. It’s the ideal solution for a weekday lunch. (Photo via Brit + Co)
Jackfruit Burrito Bowls: Seasoned jackfruit paired with brown rice and tons of veggies just sounds like a good idea. This idea only gets better when you use canned jackfruit because it makes this entire recipe not only easy but also super quick. Skip the queso fresco and use a non-dairy cheese instead! (Photo via Brit + Co)
BBQ Black Bean Tacos: Instead of buying expensive faux meat or hacking up a jackfruit, opt for some black bean tacos at your next barbecue. They’re simple to make and they cook in just a few minutes. Add a homemade peach salsa to finish them off. (Photo via Brit + Co)
Sweet Potato and Black Bean Chili: This sweet and spicy chili packs some heat, making it the perfect accompaniment to a refreshing margarita any time of year. Plus, the whole meal can be cooked up in just one pan! Of course, omit the sour cream or sub in a non-dairy alternative. (Photo via Brit + Co)
Chocolatey Trail Mix Bites: Dark chocolate dusted in seeds and dotted with nuts doesn’t sound like too bad of a choice for a snack, now does it? Go ahead and try a batch of this for yourself and see if it isn’t the best snack you’ve had in ages. (Photo via Brit + Co)
Baked Cinnamon Banana Chips: Banana chips scream childhood memories. Now you can recreate that feeling of blissful nostalgia with your very own easy-to-make version. (Photo via Brit + Co)
Apple Pie Tacos: Warmly spiced and perfectly bite-sized, these tacos are a twist on a traditional apple pie, which as we all know, is already a coveted vegan treat. Warning: You won't be able to eat just one. (Photo via Brit + Co)

Try out more of Brit + Co’s recipes by following us @BritandCo.