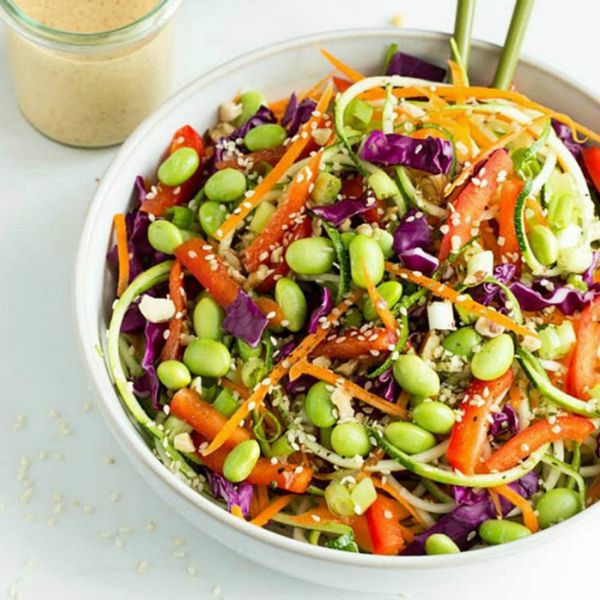 If you're eating vegan, there are also plenty of good reasons to try a raw food diet. Fruits and veggies actually lose some of their nutrients if they are cooked, so you maximize on vitamins, minerals, protein, fat and carbs. Here are raw vegan versions of everyone's favorites, including pasta and brownies, that are as tasty to look at as they are to eat. If you are craving brownies on a raw food diet, these creamy avocado-cacao bars will help you get your fix. (via Brit + Co)

These look like they belong out of a Michelin-starred restaurant, but the trick to homemade, raw beet ravioli is simpler than you think. (via Pickles & Honey)

These coconut cheesecake bites are decadent, so you can portion control with these little bites. (via Brit + Co)

Creamy soups aren’t out of the raw equation, as demonstrated by this recipe. Don’t toast the pine nuts in the topping to keep this recipe 100 percent raw. (via Full of Plants) For a raw take on ice cream, blend frozen bananas with Blue Majik powder (a nutrient dense powder derived from spirulina). Your taste buds will be in for a vibrant surprise. (via Brit + Co)

Learn how to make raw cashew-based mozzarella for a simple, diet-compliant Caprese salad. (via Green Evi)

For those days when you’re desperate for dessert but don’t have the patience to make something elaborate, whip up a helping of two-ingredient vegan banana ice cream. (via Brit + Co)

We’re used to salad, but this creamy avocado-herb dressing is a revelation. (via The Full Helping)

Though these green snacks can be consumed solo, they make one righteous party app. (via Green Evi)

On the savory side, raw vegan food doesn’t just mean salads. Lasagna made with ribbons of zucchini instead of noodles and filled with a variety of sauces is just as worthy of adoration as the traditional baked version. (via Green Evi)

You’ll start making up reasons to celebrate after your first bit of raw vegan carrot cake. Top it with a layer of fluffy vegan cream cheese frosting. (via Minimalist Baker)

If you’re craving something cold and creamy, you can sate your sweet tooth with one of these three-ingredient banana pecan paletas. They’re refined-sugar-free and receive sweetness from the bananas themselves. (via Dora’s Table)

The recipe name says it all. Make this when you need pasta stat. (via Downshiftology)

This won’t taste much different from the original version. The creamy coconut-avocado filling is an utter delight. (via Hello Veggie)

Taco Tuesdays won’t be a thing of the past. Eat the colors of the rainbow with these assembled beauties. (via Minimalist Baker)

Think of this raw vegan fruit cake as the most loaded-with-goodness granola bar ever. A mix of dried fruits and nuts give it an irresistibly crunchy, chew texture, with a sweet flavor that’s like a celebration on your tongue. (via A Virtual Vegan)

Avocado is the secret ingredient to make this soup silky. (via Hello Glow)

When your need for chocolate becomes unbearable, try your hand at a silky raw, vegan cheesecake with a decadent chocolate crust. (via Connoisseurus Veg)

This lovely dish can be meal-prepped in mason jars so you can keep up with your raw diet even on busy weekdays. (via Fit Living Eats)

Yep, you can even have cookies. It’s as easy as adding the ingredients to the food processor, rolling the mixture into balls, and topping with pecan halves. (via The Full Helping)

Beets and blood oranges combine for a salad that let’s you get your sweet fix healthfully. (via Salt and Lavender)

Pesto zoodles make a quick meal when hanger strikes. (via Simply Quinoa)
From Your Site Articles
Related Articles Around the Web
Justina Huddleston
Justina Huddleston is a food writer living in Los Angeles. When she's not busy writing, she spends her time in the kitchen creating both virtuous and decidedly junky vegan food. Buffalo chickpea pizza, anyone? She's also been known to eat a plain block of tofu or beans straight out of the can for lunch, but somehow those culinary adventures don't make it to her Instagram. You can follow Justina on Twitter or see what's cooking in her kitchen on her blog, A Life of Little Pleasures.
Healthy Recipes
Food
Healthy Essentials Healthy Living Healthy Recipes Vegan Recipes Vegetarian Recipes raw vegan raw vegan raw vegan recipes
The Conversation (1)

the cashew cream cheese was incredible and one of my favorite parts of making the Raw Beet Ravioli With Vegan cream cheese. I had only ever made beet hummas but they have this sweetness to them that are perfect for ravioli. Loved this recipe and will make again