10 YA Books That Every Age Will Love 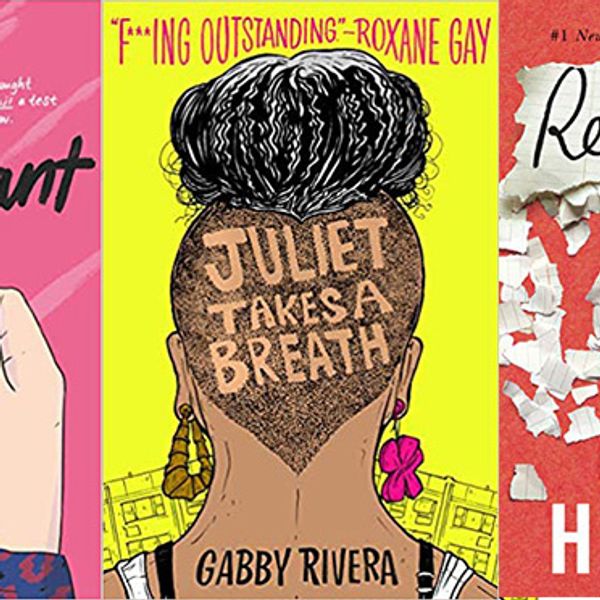 Young adult books have a way of transporting you to a different place and time, and even back to what it felt like to be, well, a young adult (sigh). These YA books have something for everyone with empowering and powerful characters and page-flipping plot lines. Find fantasy, poetry, coming-of-age tales and much more. Give 'em a try for your next book club or travel read!

1. Unpregnant by Jenni Hendriks and Ted Caplan ($17): Valedictorian hopeful Veronica Clarke's entire world comes to a stop when she learns she's pregnant. With a bright future ahead of her, she knows she wants to go to college and pursue her dreams, and chooses to abort the pregnancy. The only problem? The nearest clinic to get the procedure is over 900 miles away from home and she has no car to get there. Enlisting an old friend to drive her, the two take off on an adventure they'll never forget. With a slew of stolen cars, crazy ex-boyfriends and other wild adventures, Veronica and Bailey are in for a journey that will bring them one step closer to figuring out who they want to be.

2. Rebel by Marie Lu ($19): New York Times bestselling author Marie Lu returns with the final installment of her Legend series this fall. Eden Wing has always been known as Daniel Wing's little brother. But Daniel's life has changed since he was once seen as a national hero and now puts all of his energy toward making sure he keeps Eden safe. As soon as Daniel and Eden begin to adjust to their new normal, an unforeseen danger begins to rear its ugly head, forcing Eden into the most harrowing parts of Ross City and leaving Daniel no choice but to come and save him.

3. When You Ask Me Where I'm Going by Jasmin Kaur ($19): Jasmin Kaur's debut novel is filled with poetry, prose and stunning illustrations that tell the story of what it's like to be a woman today. Split into six sections, When You Ask Me Where I'm Going includes conversations about mental health, feminism, sexual assault and other important social issues. This new YA book focuses on empowering women to fight for what's right and what they deserve.

4. The Lost Causes of Bleak Creek by Rhett McLaughlin and Link Neal ($26): If you love Stranger Things, you'll love The Lost Causes of Bleak Creek. Set in North Carolina in 1992, teens in the town of Bleak Creek dread the idea of being sent to Whitewood School, a reformatory known for "correcting" teens who have strayed from the so-called straight and narrow. Disappearances are common, and when their best friend Alicia gets sent there, high school freshmen Rex and Leif have will have to find a way to get her out before it's too late.

5. Dangerous Alliance: An Austentacious Romance by Jennieke Cohen ($18): Lady Victoria Aston is happy with her life exactly the way it is. With a happy family, prosperous estate and plenty of time to spend her days as she pleases, everything is thrown into chaos when Vicky learns that she must marry or her family will be left high and dry. Now under pressure to find the right man to spend her life with, she consults the works of Jane Austen to help guide her. But even Austen doesn't have an answer for Vicky's problems with the men in her life. Mysterious incidents have her considering whether or not she'll make it to her wedding day alive.

6. Juliet Takes A Breath by Gabby Rivera ($18): Juliet has no problem calling herself a closeted Puerto Rican baby dyke and after coming out to her parents, she runs away to Portland, Oregon to avoid the backlash from her mother. Arriving in Portland, Juliet is excited to intern for her favorite feminist writer whom she hopes can help her figure out her life. But when Juliet realizes that her hero isn't who she thought she would be, she begins to come into herself in different ways. Through the course of a summer that changes her life forever, Juliet learns who she wants to be and how she can share her true self with the world.

7. Regretting You by Colleen Hoover ($15): Morgan and her 16-year-old daughter Clara don't seem to see eye-to-eye on anything and rely on Chris, Clara's dad, to keep their family together. But when a tragic accident involving Chris occurs, the two women find their own outlets to channel their grief and rebuild their lives. As Morgan grows closer to someone she didn't see coming and Clara turns to a boy she was forbidden to see, the divide between the two women grows deeper and by the end of the novel, they'll have to figure out whether or not their relationship is worth saving.

8. The Grace Year by Kim Liggett ($17): This instant New York Times bestseller brings readers to Garner County where women have lethal powers over men during their sixteenth year. When women in the county turn 16, they're banished into the wilderness to release their treacherous powers… but not all of those who are sent away make it back alive. Living in this county is Tierney James, and with her sixteenth birthday on the horizon, she can't stop thinking about living freely somewhere new. But what Tierney doesn't expect is that being banished into the woods means not only fearing the dangerous elements and the men who want to sell her on the black market but it also means fearing the other women she's been sentenced with.

9. When the World Didn't End: Poems by Caroline Kaufman ($15): Instagram poet Caroline Kaufman brings a message of hope and forgiveness in her new collection, When the World Didn't End. It can be hard to forgive your past and your imperfections but Kaufman is determined to help readers embrace their vulnerability and face the world with more hope and happiness. Full of new poems, illustrations and a few popular poems from Caroline's Instagram account, this new collection is a great read for fans of Rupi Kaur's Milk & Honey.

10. Children of Virtue and Vengeance by Tomi Adeyemi ($20): New York TImes bestselling author Tomi Adeyemi returns this fall with her highly anticipated sequel to Children of Blood and Bone. Zélie and Amari have successfully brought back magic to Orïsha but now, the two will have to unite their kingdom to avoid the looming threat of civil war. Fighting for the throne and trying to protect the new maji from the monarchy, Zélie and Amari will be in for the trial of their lives in Children of Virtue and Vengeance.