I Reread My Favorite Childhood Books as an Adult, and I Have Some Questions 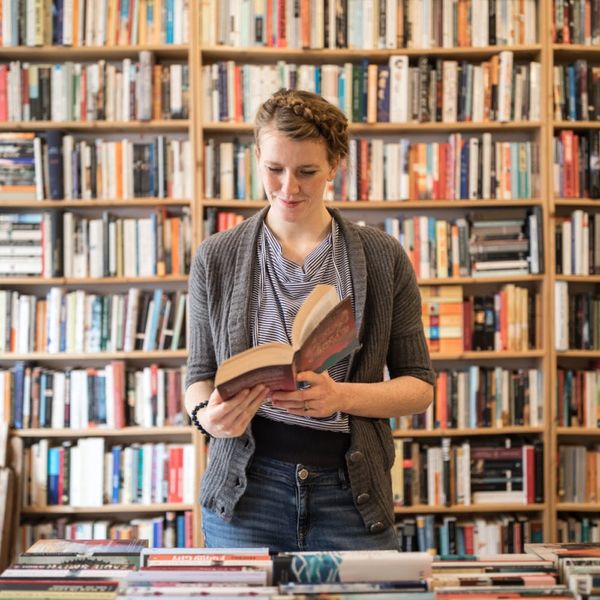 One of the greatest regrets in my life is giving my mom the okay to donate my original collection of Harry Potter books. True, I can feel good about giving a (literally) magical gift to another young reader who may not have otherwise had the opportunity to enjoy my all-time favorite series. And, true, I can also feel good about the fact that this seemingly small act represents the height of regret in my 28 years on this planet. But still! Those beautiful books! The pages on which Dumbledore died were stained with my adolescent tears, and all seven books were no doubt littered with crumbs from long summer days of obsessive reading and mindless potato chip snacking. Ah, the memories. In all seriousness, though, it breaks my heart a bit to know that those books — so meaningful to and formative for me — are no longer mine, that I can’t revisit those copies or share them with my own children someday. When I discovered that I no longer had those beautiful hardcover editions a few years ago, I started picking up paperback copies in my travels. The paperbacks are a far cry from the originals, but they do give me a portal through which I can visit Hogwarts again, which I’ve done occasionally over the last decade. And so began my journey of rereading.

I’m a major bookworm who has a constantly growing list of new titles that I want to check out, so I tend not to come back to books a second time, with just a few exceptions. I realized, though, as I found myself sucked back into the world of Harry, Ron, and Hermione, how fascinating it was to revisit the books that I’d loved as a kid, specifically. While J.K. Rowling’s books were far and away my favorites, there were plenty of others that meant a lot to me when I was growing up, and I began to wonder how it would feel to experience those as a so-called grown-up. Fast forward a few years, and I’ve turned this wondering into a full-blown passion project: a podcast that gives me the chance to revisit a title from my tween or teen years with a different guest every week. In the seven months since I launched the SSR Podcast in June 2018, I’ve reread more than 30 of these titles, and while I’ve loved almost every minute of it, I can’t say that I’m not left with a few questions about my younger self and kid lit in general. Here are just a few of them.

1. Why are kids so mean to each other? Setting aside the conventional wisdom that “girls are mean” — because I personally think it’s an unfair way to set us up to relate to each other as women — I’m going to come right out and say that kids are generally evil to each other. And my younger self thought nothing of it! Harriet the spy herself was essentially the OG burn book author, yet I idolized her. Nancy Drew had quite a few judgmental opinions. Even Mia Thermopolis of The Princess Diaries was positively overflowing with nasty comments. These are our literary heroines, people, and we didn’t even realize how rude they could be.

2. Where are all the parents? As an adult, I can now understand that the authors of children’s books are probably hoping to get rid of all grown-up characters ASAP to allow the kids to run wild and save the world. This is clearly a literary device (fancy!). But, as a kid, did I not wonder where all the adults were? Did it not occur to me to get nervous about who was going to turn on the stove to make my favorite kid characters a can of soup for dinner or who was going to drive them to school? The parents in the vast majority of the children’s books I’ve reread are flaky at best and abusive at worst, and it’s riveting.

3. Why are kids fascinated with wills? The Westing Game is one zany exploration of a rich man’s inheritance. The whole premise of the first book in the Nancy Drew series is based on another rich man’s missing will. In Ella Enchanted, the title character’s father is forced to marry his evil second wife because there’s no money left after the death of his first. If these books are any indication, I truly thought more about wills when I was a preteen than I do now as a full-blown adult.

4. Why are the love and sex narratives so weird? In Sloppy Firsts, Jessica Darling allows herself to be treated terribly by Marcus Flutie. In The Sisterhood of the Traveling Pants, Bridget’s first time is a hurtful disappointment. In Twilight, Bella’s sexual “purity” is such a prize that a family of vampires must come in to protect it. Young girls reading these books are like sponges, soaking up every last message about love and sexuality. It’s fascinating to see how confusing — and often problematic — these messages have been throughout the decades.

5. Where is all the diversity? In the vast majority of the books I’ve read for the podcast so far, there’s an almost shocking lack of all types of diversity. Almost every character is white, heterosexual, and somewhere in the range of middle-class. Most of the nuclear families look the same — still-married parents, a rowdy band of siblings — and when they don’t, it’s almost always a huge pain point for the main characters. When MCs stray from the mainstream narrative with behavior that doesn’t necessarily fit with who they’re “supposed” to be (particularly in terms of gender), it’s typically played off as a joke or a scandal. Clearly, these titles are a product of the time in which they were written, but it’s mind-blowing to reflect on this lack of diversity in 2019.

6. Why did I ever need Netflix? When I was growing up, I was a big reader, and reading was just what I did. In the mid-’90s, there was a lack of other entertainment options (I had a handful of computer games, but that’s pretty much it), and since I wasn’t an especially athletic little girl, you could almost always find me with a book in hand. This rereading project has been a healthy reminder of the variety of stories I consumed in my tween and teen years. No wonder I wasn’t craving other activities! While I’m certainly grateful for the opportunity to binge TV to my little heart’s content now that I’m an adult, I see now how much reading encouraged my imagination and kept me occupied for hours on end.

Alli Hoff Kosik
Alli Hoff Kosik is a freelance writer who is passionate about reading, running, rainbow sprinkles, her lipstick collection, watching embarrassing reality TV, and drinking pink wine. She lives in Brooklyn with her husband and (in her dreams, at least) three golden retriever puppies. Listen to her talk books on The SSR Podcast.
Books
Creativity
Books Nostalgia
More From Creativity