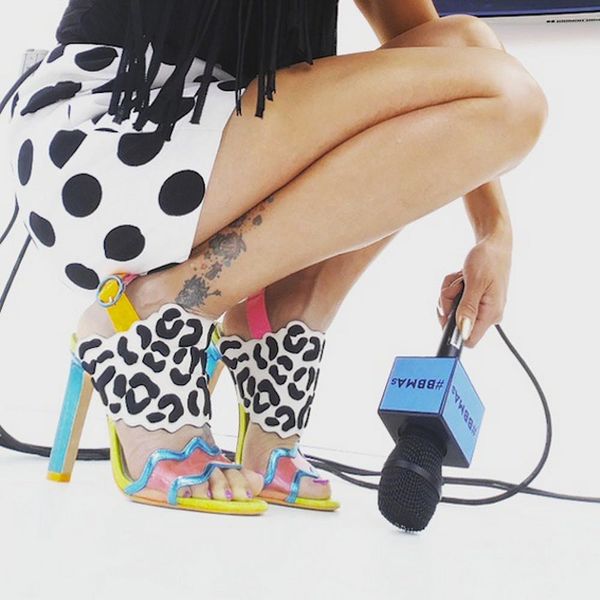 While some celebs were getting glam for Cannes, others were gearing up to rock the red carpet at the 2015 Billboard Music Awards. Hosted by Chrissy Teigen and Ludacris and featuring performances by Nicki Minaj, Iggy Azalea and Britney Spears, this awards show was bound to be ah-mazing. And thanks to Instagram, we were able to live vicariously through some of Hollywood’s hottest stars as they documented their incredible night, from the limo to the stage and everywhere in-between. Scroll on for a behind-the-scenes sneak peek at the biggest names in music.

1. Chrissy Teigan: Chrissy gave us a sneak peek at how she and Ludacris prepped for the BBMAs. We hope they coordinate every outfit change. (via @chrissyteigen)

3. Giuliana Rancic: Whether she’s interviewing celebs or striking a pose on the red carpet, E! News host and interview superstar Giuliana Rancic knows how to work the cameras. We’re loving her longer lengths and that sexy side slit. Get it, G! (via @giulianarancic)

6. Nick Jonas: How does Nick Jonas prepare for a huge awards show performance? By kicking back and relaxing on some sound equipment boxes, of course. (via @nickjonas)

7. Danica McKellar: When it comes to awards shows, it’s all about the beauty. The former Wonder Years actress and Dancing With The Stars stunner got glam and gorgeous in the makeup chair before the big show. (via @danicamckellar)

8. Terrence J: The handsome E! News host keeps it silly while showing off his style swag on the red carpet in an Ermenegildo Zegna suit, complete with a dapper bow tie and pocket square. (via @iamterrencej)

9. Kylie Jenner: If you’ve got it, flaunt it: Kylie Jenner does just that on the BBMAs red carpet. The youngest of the Kardashian/Jenner clan, Kylie turned heads in a black and gold Balmain mini. (via @kyliejenner)

11. Mariah Carey: Can you believe it’s been 17 years since Mariah last performed at a major awards show? That’s cray cray! For her big debut, the iconic diva slays in a ferocious black dress and eye-catching jewels. (via @mariahcarey)

12. Britney Spears: There’s nothing we love more than seeing our girl Brit smiling. We think she and her boo are adorable, and we’re still reeling from all the crazy awesomeness that was the Pretty Girls music video. (via @britneyspears)

13. John Legend: A Billboard Music Awards power couple, the oh-so-sexy (and hilarious!) married duo struck a pose in a party bus… because why wouldn’t they? (via @johnlegend)

15. Ludacris: Oh NBD, here’s Ludacris hanging out with Wayne Newton, aka Mr. Las Vegas. If these two ever teamed up, we bet it’d be the craziest variety show ever. (via @ludacris)

What were your fave Instagram moments from the 2015 Billboard Music Awards? Tell us in the comments!