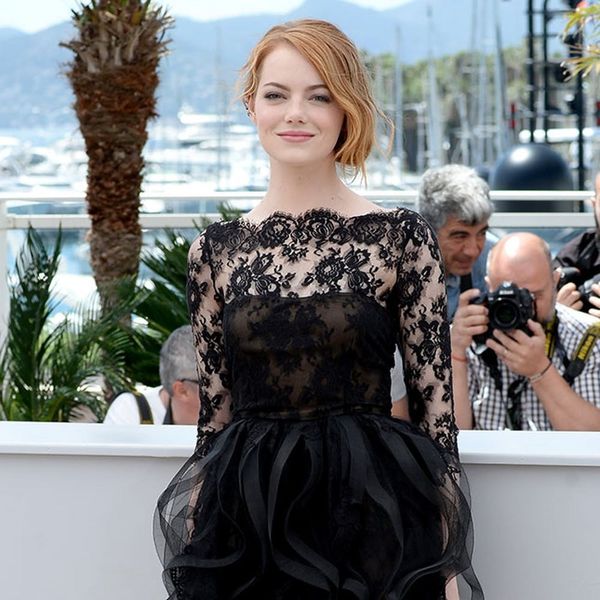 In your eyes, Lupita Nyong’o might have already won the red carpet with her gorg green Gucci dress, but that doesn’t mean the rest of Cannes has quit pulling out the sartorial stops. Remember, people: it’s only day three of the almost two-week long film and fashion extravaganza, and that means we’ve all got a lot more swooning to do. Start here with some of the best celebrity looks you haven’t seen yet, you know, because you’re still seeing everything in grasshopper green. We bet the side effect will fade as soon as you lay eyes on Charlize Theron’s train-for-days gown, Emma Stone’s tulle and lace cocktail dress and more styles straight from the South of France.

1. Emma Stone: The Irrational Man star proves you don’t need a floor-length gown to turn heads at Cannes. With a ribbon tulle skirt that hits just above the knee, her lacey, textured LBD is next-level cocktail attire inspo. (Photo via Samir Hussein/Getty)

2. Eva Longoria: Last year at Cannes, Eva wow-ed in a blush colored gown and equally romantic fishtail braid. This year, her look is the exact opposite: a striking silver-flecked dress with a down-to-there plunge that makes a case for going glitzy way before holiday season. (Photo via Clemens Bilan/Getty)

3. Rachel Weisz: The Lobster star’s fits-like-a-glove jumpsuit is the ultimate frill-free way to dress up. A single cutout and vintage-inspired neckline give this straight-leg number a glamourous edge. (Photo via Ben A. Pruchnie/Getty)

4. Miranda Kerr: Leave it to the former Victoria’s Secret Angel to make Barbie pink work on the red carpet. To pull off a color this girly, look for dresses that feature more daring neck, side or hemlines — Miranda went for all three and nailed the ultra sexy look. (Photo via Andreas Rentz/Getty)

5. Charlize Theron: Why pick between a cape and a train when you can have both? The Mad Max: Fury Road star’s bright yellow gown shows how those statement details can mak an otherwise simple silhouette.

7. Sophie Marceau: The Cannes juror just took the shirt dress to a whole new glamorous level. We’re obsessed with the casual-chic mix of the open collar and rolled sleeves with a knotted waist and thigh-high slit. (Photo via Pascal Le Segretain/Getty)

Need to see more? Click here to see the best looks from Day 1 of Cannes!

What looks from Cannes are making you swoon? Tell us who made your best dressed list in the comments below.