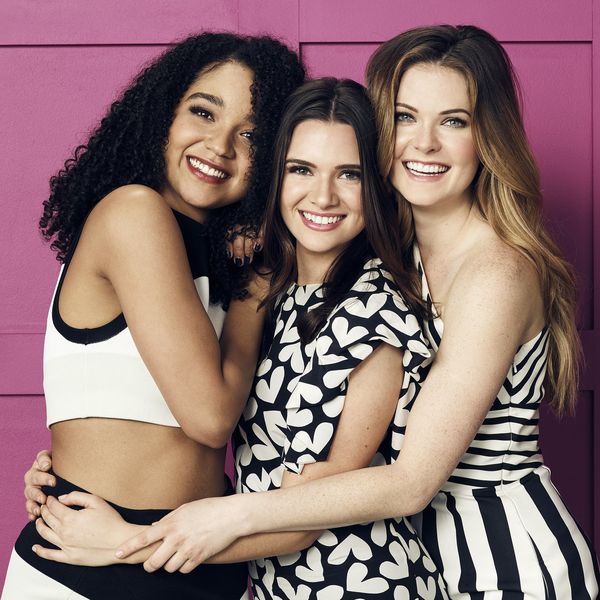 Welcome to Brit + Co's Binge-Worthy Bulletin, a new series where, every week, we choose one show we're obsessed with and tell you all the reasons why. This week's pick is The Bold Type, which just started its second season on Freeform. Smart, funny, and topical, but never preachy or heavy-handed, this female-driven dramedy is like Sex and the City meets Devil Wears Prada, but for a younger, more socially aware audience. Don't take our word for it, though. Click through to see all the reasons you should watch the show, and then catch up on seasons 1 and 2 before the new episodes on Tuesdays at 8pm ET/PT. (Photos via Freeform/Justin Coit + Freeform/Philippe Bosse)
The depiction of female friendship: Kat (Aisha Dee), Jane (Katie Stevens), and Sutton (Meghann Fahy) are the opposite of mean girls. They're supportive, loyal, and loving, and they have each other's backs, always. If one of them has a victory, they all celebrate; if one of them takes a loss, they all feel the pain — and then they pick each other up off the ground and try again. (Photo via Freeform/Justin Coit)
The depiction of female sexuality: Honest, sex-positive conversations are The Bold Type's specialty. Season 1 featured a whole episode about Jane's quest for an orgasm (in the name of #journalism, of course), and season 2 has showed Kat venturing into new-for-her territory with Adena (Nikohl Boosheri), her first same-sex romantic partner. The series also tackled sexual assault in its summer finale, which aired prior to the Harvey Weinstein revelations that led to a resurgence of the #MeToo movement. (Photo via Freeform/Philippe Bosse)
The fashion: You're sure to find your fashion inspiration in one of the characters, whether it's Kat's downtown edge, Sutton's sexy preppiness, or Jane's feminine flair. Oh, and don't forget the total boss vibes of Jacqueline (Melora Hardin). More on her in a minute. (Photo via Freeform/John Medland)
The boss envy: Scarlet editor-in-chief Jaqueline is the dream boss — someone who supports your ideas, pushes you to be the best, and isn't afraid to drink with you (but not too much, because #professionalism). (Photo via Freeform/Justin Coit)
The inside scoop on the magazine industry: We're not saying that working at a major magazine means endless fashion-closet gossip sessions, but the green-juice runs, nonstop pitching, and looming deadlines are all too true. We have former Cosmopolitan editor and Bold Type executive producer Joanna Coles to thank for that. (Photo via Freeform/Philippe Bosse)
The all-too-relatable job struggles: The Bold Type nails exactly what it's like to be young and starting your career. We won't spoil it for you, but Jane's story line is especially relevant for millennials in media. Everything about her journey — her ambition, her fears, her mistakes — rings true. Sometimes too true. (Photo via Freeform/Phillippe Bosse)
The forbidden romance: Will they? Won't they? Could they? In the real world, we'd probably have a lot of objections to 20-something Sutton dating 30-something Richard (Sam Page), who's on the board of the magazine where she works. But on the show, we can't help 'shipping these two. (Photo via Freeform/Justin Colt)
The Devil Wears Prada vibes: Jacqueline is no Miranda Priestly — she would never threaten to fire someone for failing to procure a personal copy of the unreleased Harry Potter book, for example — but if you're still longing for a sequel to that 2006 movie (same), consider this your weekly fix. (Photo via Freeform/Justin Coit)

Do you watch The Bold Type? Tell us @BritandCo!