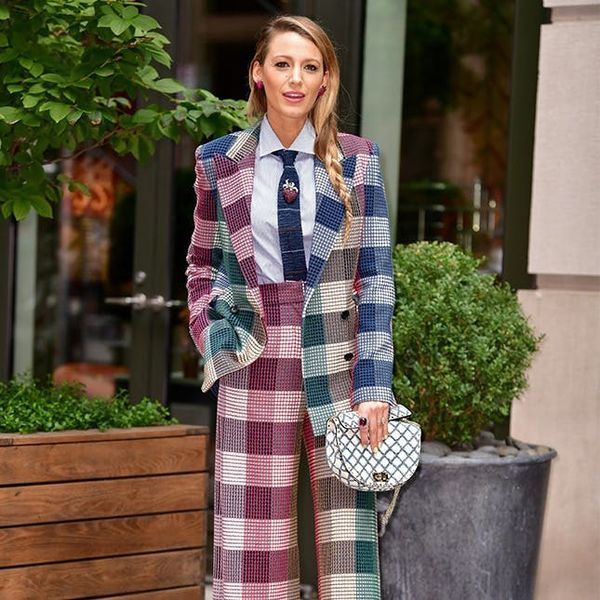 Hey Upper East Siders — in case you missed it, Blake Lively has been sartorially crushing it on her press tour for A Simple Favor. Known for consistently stepping out in some of the most fashion forward outfits, Lively did not disappoint with her fresh-off-the runway, menswear-inspired ensembles this week. While she often wears pretty dresses and glitzy showstoppers on press tours, we have a hunch as to why she pivoted into this slightly different style direction. The tailored suit trend is incredibly hot right now. Plus, the strong, powerful look means business and commands attention. Interested in testing out the look for yourself? Keep scrolling to check out every menswear-esque outfit Lively recently wore. We have a feeling Serena would definitely approve ...
Neon Dream: Lively kicked off her press tour on August 17 in New York City in an actual menswear look. Yes, that’s right—this vibrant neon Versace suit is actually from the latest men’s collection! She finished off the eye-catching outfit with contrasting Christian Louboutin heels. (Photo by Gotham/GC Images)
Crushing Velvet: Lively switched to this sleeveless velour Brunello Cucinelli suit on that same day, August 17. Velvet is a bit hot for a summer day, but the idea of a sleeveless suit feels so right for the season. She was also spotted layering a burgundy blazer over the look for a quick switch up. (Photo by James Devaney/GC Images)
Check Please: Let’s be real, this getup Lively wore outside of the Crosby Street Hotel on August 18 in NYC feels straight out of the Gossip Girl archives. We could absolutely picture Serena in this Roland Mouret tartan suit with coordinating menswear-inspired tie and Christian Louboutin pumps. (Photo by James Devaney/GC Images)
Earning Her Stripes: Talk about a power outfit. The elevated Zimmermann pinstripe suit (from the resort 2019 collection) Lively wore on the streets of NYC on August 19 is so sleek and polished. Her white lace shirt underneath and nude heels completed the look perfectly. (Photo by Gotham/GC Images)
Think Pink: For a slightly more casual menswear look on August 20 in NYC, she went for a dusty pink suit with unique frayed edges, combined with a white blouse and stylish brogues (a change from the sky-high heels she normally wears). (Photo by TheStewartofNY/GC Images)
Vision in White: Attending the MTV VMAs on August 20 in NYC (where she presented alongside her A Simple Favor co-star Anna Kendrick), the mom of two went for a dramatic Ralph and Russo white suit with exaggerated culottes. An unexpected, yet perfect, red carpet look. (Photo by Nancy Rivera/Bauer-Griffin/GC Images)
Bring the Drama: Talk about a show stopper! Lively brought the menswear trend to a new dimension on September 10 at the A Simple Favor premiere in a gorgeous Givenchy suit featuring a dramatic train and a sparkly see-through top. Her silver Christian Louboutin heels completed the ensemble so perfectly. (Photo via Tal Rubin/Getty)
Orange Dream: Lively is never afraid of color (and we love that!). While in NYC on September 10, she stepped out in a vibrant orange double-breasted suit by Bottega Veneta with matching flats. The hint of yellow underneath the blazer makes the entire look feel even more unique and fashion-forward. (Photo via MediaPunch/Getty)
Logo Mania: Lively went for the unexpected in a three-piece logo suit by Wolk Morais out in NYC on September 10. For a cool downtown feel, she incorporated a pair of rugged combat booties into the ensemble. (Photo via MediaPunch/Getty)
Layer Up: Lively layered up to go out and about in Manhattan on September 11 in a sleek tartan Brunello Cucinelli suit and a leather coat. Her red box bag and two-tone Louboutin brogues gave the outfit just the right amount of punch. (Photo via Robert Kamau/Getty)
Fancy Lady: Now this is how you do a menswear-inspired evening look! On her way to film The Tonight Show Starring Jimmy Fallon on September 13, Lively opted for an elegant tailored getup with a velvet vest and coordinating pants. While we adore heels, we’re loving her choice of patent oxfords here for a fresh twist. (Photo via Patricia Schlein/Getty)

Bobby Schuessler
Bobby Schuessler is a contributing fashion writer at Brit + Co and has contributed to Who What Wear, Refinery29, Lucky, Glamour, Out, Nordstrom, and Barneys New York. When he's not writing about style and shopping, you can find him catching up on the latest Housewives franchise and sipping his go-to drink, a vodka martini with a splash of cranberry and a twist.
2018 style trends
Celeb Style
2018 style trends Celebrity Style Fall Style Fashion Inspiration
More From Celeb Style