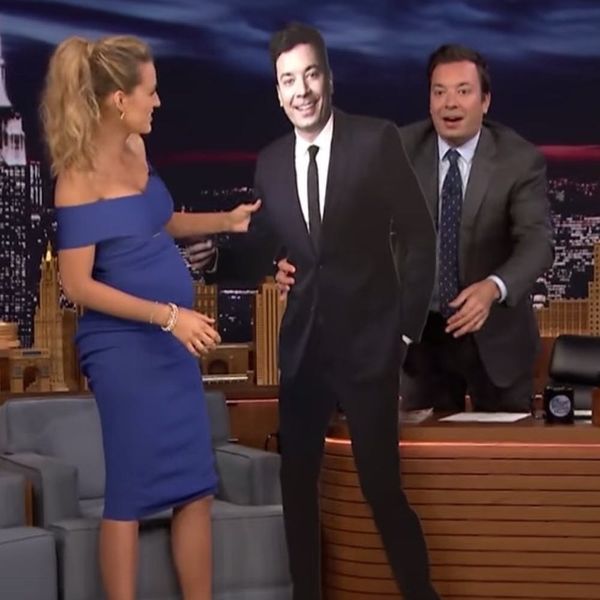 Ever since Blake Lively and Ryan Reynolds had their first baby, James, in January of last year, the world has been eating up every bit of info we can get about their super-cute family — especially since the pair hopes to have a whole bunch of kids. But even though James was able to predict Blake’s next pregnancy before even Blake knew about the baby bump, there’s been a little confusion for James about who her *real* dad is — all because of a cardboard cut-out.

On The Tonight Show Starring Jimmy Fallon over the weekend, Blake spoke with Jimmy about a bit of trouble they’ve had with James recently. See, last time Blake was on the show, Jimmy gave her a cardboard cut-out of himself to take with her… and it caused a little bit of confusion at home, to say the least.

“It sort of messed up my home life a little bit,” Blake joked, before sharing a home video of James and the cut-out Jimmy.

The home video showed James giving the cardboard cut-out a kiss before declaring that Jimmy is her “dada.” YEP, drama! As Jimmy nervously fanned himself, Blake explained that James has had this association for quite some time. “Even backstage [on the first day] she goes ‘Dada!’… ever since then, it’s been Dada. So I think I should do a paternity test.”

Even though the cut-out certainly caused a bit of a mix-up, it’s clear that Blake and Ryan had fun taking photos with fake Jimmy. Ryan and cardboard Jimmy even enjoyed a nice glass of scotch together, prompting Blake to joke, “He’s gonna be pregnant with your child soon.”

How do you think Blake and Ryan should clear this up for their adorable baby daughter? Let us know @BritandCo!

(Photos via The Tonight Show)