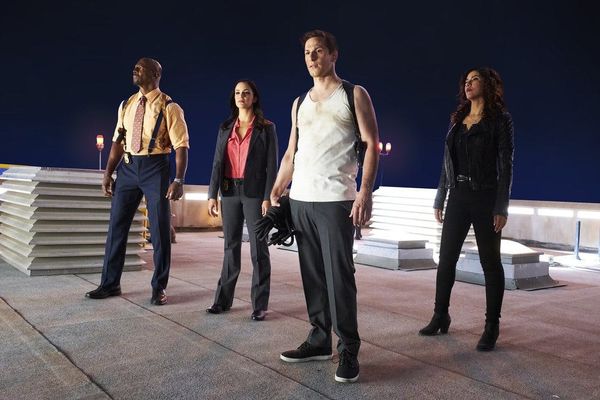 NBC just gave us another reason to love Brooklyn Nine-Nine. With the January 10 premiere of season 6 less than two weeks away, the network dropped a new promo that may look (and sound) familiar to fans of another NBC crime show: Law & Order: SVU.

“On the streets of the city, there are those who commit crimes and those who stop them,” a deep voice narrates. “Members of an elite squad, of dedicated detectives. These are their stories.”

It sounds like the intro for L&O: SVU, but the “elite squad” in question is actually the detectives of the Nine-Nine, and their stories are more comedic than dramatic. The promo features clips of Jake Peralta (Andy Samberg) and Charles Boyle (Joe Lo Truglio) collapsing under the weight of too many weapons, Hitchcock (Dirk Blocker) and Scully (Joel McKinnon Miller) making an arrest with their pants down, and Amy Santiago (Melissa Fumero) tending to a plaster-encased Boyle with Captain Holt (Andre Braugher).

The promo is so good, it actually has fans calling for a Brooklyn Nine-Nine/Law & Order crossover episode. Fumero, for one, sounds like she’s open to the idea. In response to the mini-trailer, the actress tweeted, “I love this Law & Order promo! Especially since I never got to do a Law & Order when I lived in NYC. This counts, yes? Alright!”

We’ll keep our fingers crossed for an Amy Santiago-Olivia Benson team-up, but in the meantime, NBC wants to assure fans that despite a brief cancellation by Fox earlier this year, the Nine-Nine crew isn’t “DUN DUN yet.”

The sixth season of Brooklyn Nine-Nine premieres Thursday, January 10, at 9pm on NBC.

Would you like to see a Brooklyn Nine-Nine/Law & Order crossover episode? Let us know @BritandCo!