Whoa! This Kickstarter Just Made Over $100K in 2 Hours 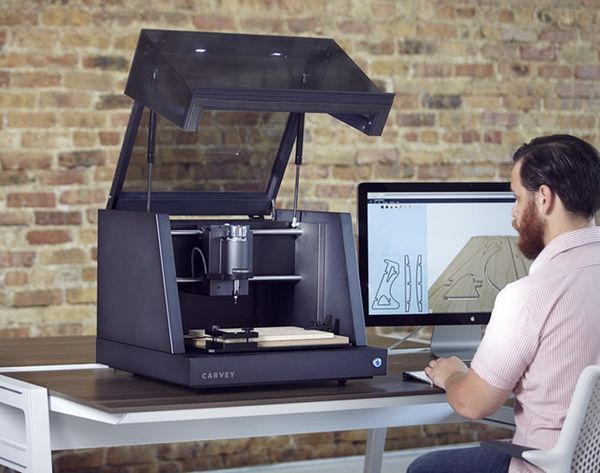 Alright, ladies and gentlemen. We want to take a quick break from our obsession with 3D printers and talk about a 3D carver that’s taking all of the grunt work out of making your product designs a reality. It’s called Carvey and to use it, you don’t need a special design program, or even a lot of space — you just need to get your creative juices flowing.

The great minds behind this tabletop carver are the folks over at Inventables. They’ve already churned out some innovative 3D printers and laser cutters, and with the Carvey they’re adding another fun, easy-to-use tool to their repertoire. To design Carvey, Inventables teamed up with the team over at MNML with the goal of creating an office staple that’s totally sleek and a must-have for makers. But it’s not all about looks. It was important to Inventables CEO Zach Kaplan that Carvey was also really quiet… and guess what? It is.

Carvey knows how do to everything you need it to and it doesn’t need much help from you. That means more time focusing on the product design and less time focusing on getting your machine to work. If CAD and CAM programs aren’t second nature to you, NBD — Carvey comes with a program created specially to work with it. It’s called Easel and it runs right from your browser. With Easel, you simply create your design, choose your material and click “Carve.” Did you hear that? That was our techy, maker hearts falling in love. FYI: If you already know the ins and outs of other 3D CAD or CAM software, you can use those too.

Carvey can work with dozens of different materials like walnut, maple, balsa, cork, circuit boards, gold, wax and more. By selecting your material in Easel, the machine is already preset to work with it appropriately. We’re thinking of having a carve fest to create jewelry, decorations, wall art, stamps and decals just to name a few.

Kaplan said, “In the past few years we’ve seen an explosion in 3D printing, and we believe that 3D carving is the next step.” We can’t wait to get one in the office.

Apparently we’re not the only ones who think this product is just the bees knees, because since its Kickstarter campaign launched this AM, the Carvey has already more than doubled its $50,000 goal. It probably has a lot to do with the fact that a $1,999 pledge gets you your own Carvey and another player in the maker movement. Check out the campaign here.

What would you make with Carvey? Let’s start brainstorming in the comments!

Katelan Cunningham
Katelan is a tech junkie obsessing over all things startup and design. She has entirely way too many apps on her phone and is no stranger to binge-watching. She accidentally fell in love in Los Angeles and that’s where she currently lives, writes, tweets and grams.
Design
Tech
Design Kickstarter Makers