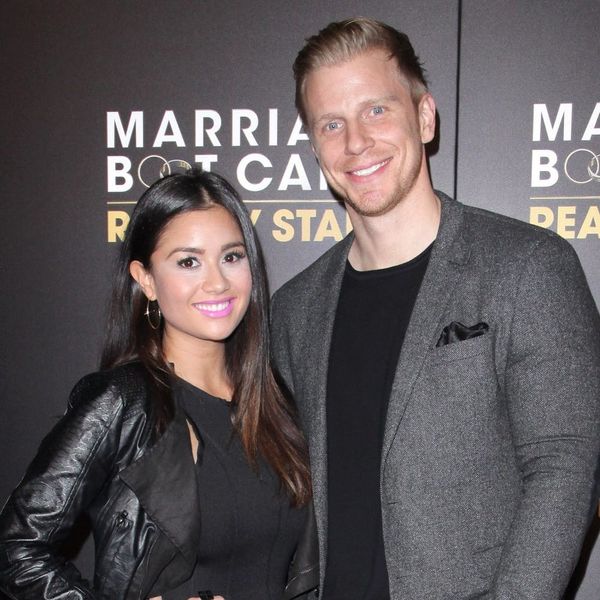 With so much Bachelor in Paradise and tweeting drama going on, it’s easy to forget that the show franchise has also been the source of plenty of harmony in its day too. Take Catherine and Sean Lowe, for instance. As one of Bachelor Nation’s top success stories, the pair not only went on to get married (on national TV, no less), but they share a now 11-month-old son, Samuel, and also have a furniture line with Wayfair, Home by Sean & Catherine Lowe, together.

Catherine told Brit + Co that it’s their differences that give them such strength as a pair. “Sean is a business kind of guy — he’s really good at money and organization. I’m more of the creative type,” she said. “Because we have those different qualities, we take each other more seriously. We need each other’s input and default to each other’s expertise.”

It’s that kind of teamwork that makes it possible for the pair to be around each other 24/7 (though the fact that they’re also BFFs certainly doesn’t hurt, either). “We said it from the beginning — we’re best friends,” Sean tells us. “We rarely get sick of each other, and if we do, it’s normally her getting sick of me,” he jokes.

But don’t get them wrong — they do have their fights, just like any other couple. “On our social platform, it may paint a perfect marriage and a perfect life, and that’s not always the case,” Sean says. “We run through hard times; we get in fights occasionally — life is not always roses, but we have committed to work through [our battles] and are committed to love [each other].”

Still, for the most part, “It’s a fairly unique dynamic,” saying they’re able “to separate the business of our lives from the family portion.”

It’s a good thing, because with their little tyke Samuel growing so quickly, family takes up a pretty big portion of their lives. “The kid never stops,” Sean shared. He’s not yet walking (though Catherine says he’s close), but he’s been practicing his dexterity and is a rather active little guy. “Right now he is obsessed with putting lids back onto cans… he opens doors,” she reveals, joking that he’ll likely go from crawling to running, skipping that whole walking bit entirely.

The two have been so busy, in fact, they haven’t even had time to watch Rachel Lindsay’s season of The Bachelorette (though they said they have it DVR’d). Still, they know enough about her to know that the 31-year-old doesn’t need much advice when it comes to choosing her own destiny. “I want some advice from HER!” Catherine said. “She looks like such an awesome woman — she knows how to flirt without being ditzy, and is someone who can really understand where the guys are coming from,” adding that she hopes that she’ll soon be friends with the Bachelor family’s newest addition, considering they both live in Dallas, Texas.

The pair does admit they think she’d be smart to follow the lead of couples such as Nick Viall and Vanessa Grimaldi and take her time with her engagement. Speaking from experience, Catherine explained, saying, “You get off the show, and you’re engaged to somebody when you don’t even have their phone number… getting engaged on the show offers a lot more challenges than a normal couple. [You have to figure out] where you’re gonna live and what daily life is gonna look like within weeks of knowing each other.” Okay, girl has a point. “As mature adults in a real relationship, [it’s about] making the right decision.”

Needless to say, with so much going on, these two need a getaway from time to time — even if it’s not far from home. Rather than boarding a plane with their babe, which Sean said can be chaotic (“The amount of stuff you have to bring for a baby can be overwhelming at times… you just have to be prepared. Before, we could pack with our eyes closed!”), they most recently took a staycation in Dallas to the Adolphus Hotel. “It was really fun to bring Samuel by the pool, we just enjoyed the day,” Catherine told us. “For people like us that are just really busy, a full day of relaxation [helps to] reset mentally.”

Want a chance to switch up your routine and break away from basic? We want to help you get to your next adventure at a @marriotthotels with a #paid giveaway thanks to @MarriottRewards Premier Credit Card from @Chase! All you have to do for a chance to win a $500 Marriott gift card is 1. Comment below about what you would do to break away from your normal routine, 2. Tag one friend, and 3. Use the #MarriottCard and #Sweepstakes hashtags. This could be YOU! Official Rules: marriottcard.chaseonlinesweepstakes.com #sponsored

BRB… running to make some staycation plans ourselves!

What do you think of Catherine and Sean’s advice? Tell us over @BritandCo.

Nicole Briese
Nicole is the weekend editor for Brit + Co who loves bringing you all the latest buzz. When she's not busy typing away into the wee hours, you can usually find her canoodling with her fur babies, rooting around in a bookstore, or rocking out at a concert of some sort (Guns N' Roses forever!). Check out all her latest musings and past work at nicolebjean.com.
Celebrity Couples
Celebrity News
Celebrity Couples love the bachelor
More From Celebrity News