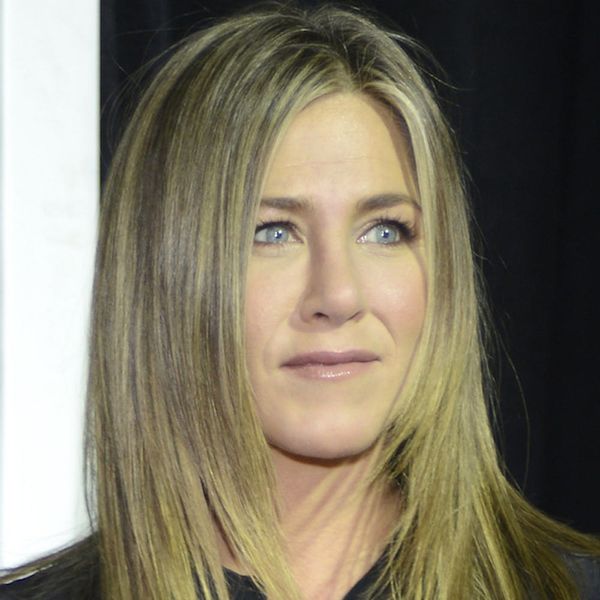 From a meaningful stand against “warped beauty standards” to growing families, check out six of today’s top news items below to get you through this Hump Day.

1. Jennifer Aniston is not one for social media, nor is she one to comment on or participate in celebrity gossip culture. She tries to live her life as quietly and privately as possible, even while her love life and whether or not she will ever have children have been topics of huge interest in the media for what feels like ever. But she’s fed up with the constant scrutiny, and said as much in an essay penned for the Huffington Post that quickly went viral. “For the record, I am not pregnant. What I am is fed up,” she writes. “I’m fed up with the sport-like scrutiny and body-shaming that occurs daily … The objectification and scrutiny we put women through is absurd and disturbing. The way I am portrayed by the media is simply a reflection of how we see and portray women in general, measured against some warped standard of beauty.” Jennifer goes on to make an even bigger point about the particulars of the media’s above-mentioned obsession with her, and it is this message of independence that has really resonated with women in a big way: “We are complete with or without a mate, with or without a child. We get to decide for ourselves what is beautiful when it comes to our bodies. That decision is ours and ours alone. Let’s make that decision for ourselves and for the young women in this world who look to us as examples. Let’s make that decision consciously, outside of the tabloid noise. We don’t need to be married or mothers to be complete. We get to determine our own ‘happily ever after’ for ourselves.” YES JENNIFER. Um, can we sign her up for a Twitter account, please? (h/t Huffington Post, image via Tim Mosenfelder/Getty)

This is the moment a Canadian Tenors' member sang “all lives matter” during #MLBAllStarGame. Video via @BillCooneypic.twitter.com/8K3UFMcS2x

2. Last night at the MLB All-Star Game, the performers singing the Canadian anthem changed the lyrics to “All Lives Matter.” Apparently this atrocity only aired in Canada because Fox went to commercial in the US, but the singing group The Tenors were performing “O Canada” when one member not only changed the lyrics as seen above, he held up what looked like a hastily written sign saying All Lives Matter as well. The reaction in Canada was immediate, shocked and angry, and the group quickly released a statement saying he acted as a “lone wolf” and that he would no longer be performing with the group. YIKES.

And then there were four... chelseahouska.com

3. Teen Mom 2‘s Chelsea Houska announced she’s pregnant in an elaborate and adorable post. Can’t. Handle. The cuteness. If you follow the lives of the Teen Mom women (guilty!), you’ll already know how head-over-heels in love Chelsea and her fiancé Cole are and that they were planning on having kids after their upcoming wedding. But it happened a little sooner than expected, and Chelsea announced on Instagram that her second baby is already on the way. The photo features Chelsea’s daughter Aubrey, who she had with her high school boyfriend Adam, holding a sonogram on a Pinterest-worthy wood cut-out while Chelsea and Cole hold hands in the back, all with the caption “and then there were four.” Apparently they don’t plan on postponing the wedding, she’ll just let out the dress a little, and in fact she’s even MORE excited to be married now. Congrats to the growing family!

Beyond blessed and excited to share that we are expecting our third baby girl!!! #Blessed #BabyMamba #Thankful ❤️🙏🏽👶🏽🎀🎉

4. And while we’re at it, MORE baby news, this time from Kobe Bryant and his wife Vanessa! Ugh, these Instagram announcements are just TOO. MUCH. “Beyond blessed and excited to share that we are expecting our third baby girl!!! #Blessed #BabyMamba #Thankful,” Kobe captioned the photo, which features a onesie that says “Baby Mamba,” a sparkly red bow and the teeniest, cutest little Nike Kobe sneakers. New baby Bryant will have two big sisters, 13-year-old Natalia and 10-year-old Gianna.

5. This initiative is rethinking hospital gowns for children and teens, and it’s amazing. The collaboration between Starlight Children’s Foundation Canada and various Canadian artists, including tattoo artists and fashion designers, hopes to help the young patients retain some of the all-important self expression that clothing allows at these ages. “It’s way better than just cookie-cutter-everything that you usually see in hospitals,” one patient who received one of the robes told the Globe and Mail. “Anything that helps you personalize — where you get to have a say — is great in the hospital.” And as you can see from the video, he’s not the only one who feels that way.

6. Quote of the day: “Too often, we judge other groups by their worst examples while judging ourselves by our best intentions.” Despite his confusing smiling and dancing at the Dallas memorial, George W. Bush also delivered a speech with some inspiring lines in it too.

Did you think George was in the wrong for dancing at the memorial? Tweet us your thoughts @BritandCo.