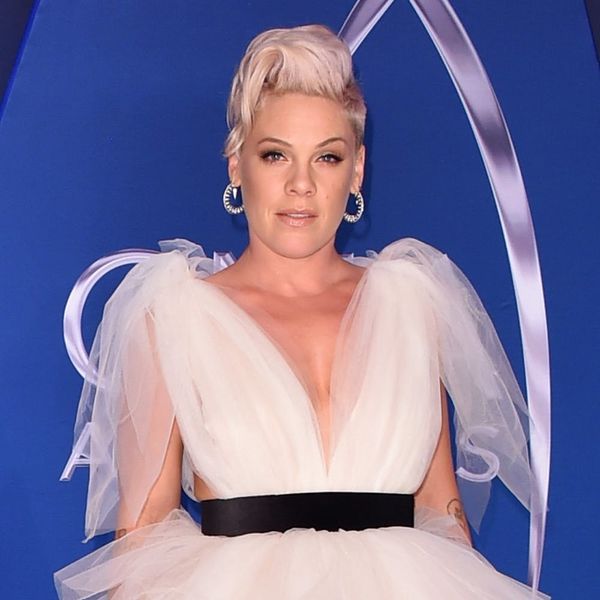 Pink had fans weeping at the 2017 American Music Awards when she and Kelly Clarkson opened the show with a tribute to first responders. Later in the evening, she ditched the stage to perform her song “Beautiful Trauma” while hanging off the side of an *actual* hotel building. Now the singer has followed up that stunning feat with a sneak peek at her new music video, which features none other than Hollywood hunk Channing Tatum as her 1950s-era hubby.

The 38-year-old teased the music video during the 2017 American Music Awards on Sunday night, then took to Instagram to share the colorful clip with fans who might have missed it (or who just want to rewatch it a million times).

In the video, which will debut in full on Tuesday, we see Pink as an old-school housewife going about her daily chores (with the apparent aid of a cabinet full of pills) before Tatum appears from behind a newspaper. His outfit? Retro fabulousness if we ever saw it!

While this might seem like a random pairing, there’s actually an existing connection between the two stars. The actor’s wife, Jenna Dewan Tatum, was once a backup dancer for the three-time Grammy winner.

The Magic Mike XXL star also interviewed Pink earlier this month, when he stepped in as a guest host for Jimmy Kimmel Live. The pair talked about the “What About Us” singer’s touching VMAs speech and their sassy kids, but didn’t mention collaborating on her “Beautiful Trauma” music video.

Now that we’ve gotten a glimpse at what’s in store, we can’t wait to see more from this duo when the music video drops Tuesday, November 21.

Are you excited to see Channing Tatum as Pink’s hubby in the “Beautiful Trauma” video? Let us know @BritandCo!