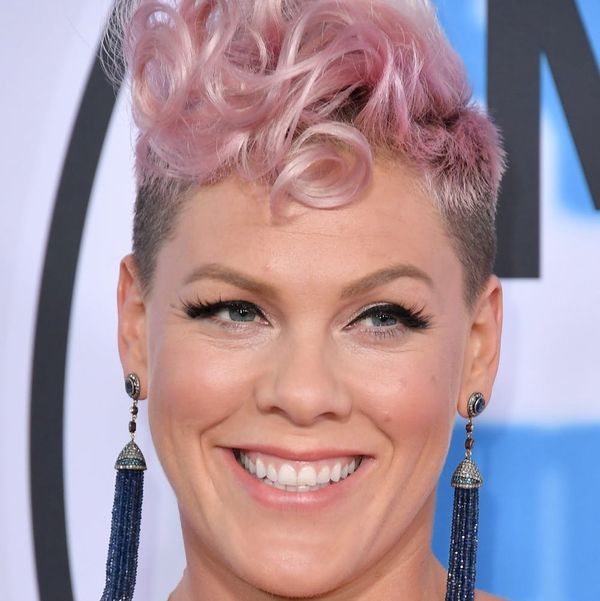 Pink had fans weeping at the 2017 American Music Awards when she and Kelly Clarkson opened the show with a tribute to first responders, but as the mother of two soon proved, she was just getting started. For the “What About Us” singer’s second performance of the evening, she ditched the stage, performing a death-defying stunt that saw her hanging off the side of an *actual* hotel building!!

Performing her latest hit tune “Beautiful Trauma,” the Grammy-winner, already well known for her acrobatic abilities (you may recall her breathtaking 2009 MTV VMAs performance of “Sober” and 2012’s lip-riding take on “Get the Party Started” and “Blow Me (One Last Kiss”)) decided to take things up a notch by taking her stunts outdoors — of sorts — and scaling the side of the JW Marriott hotel in downtown LA.

Reportedly 34 stories up, the songstress had only the glass paneled windows to use for occasional balance and propulsion. Along with six additional aerialists, the 38-year-old flipped, twisted, spun, and generally flew through the air at unimaginable heights while singing her heart out in a glittery purple costume that put her at center “stage.”

Is there anything @Pink can't do?! 🤸‍♀️ #PINKxAMAs

So crazed was the stunt, in fact, the seemingly dauntless performer admitted she was actually feeling jitters about the sitch, sharing a clip of herself on Instagram one day prior in which she confessed, “I’m just afraid I’m going to get up there and be like, ‘I don’t know if I can do this.’ I don’t care about heights, I just care about being able to actually breathe up there.”

Despite her apprehensions, however, our girl proved once more that there’s really nothing she can’t conquer when she sets her mind to it.

Check out her insane performance in full below!

Did you love Pink’s 2017 AMAs performance? Let us know @BritandCo!

Desiree O
Desirée O is a ‘Professional Bohemian’ who loves anything and everything related to the arts, entertainment, and pop culture. She ADORES being a ‘Newsy’ for Brit + Co, covering all of the latest tidbits of awesomeness that you want to read about. When she’s not writing, she’s either making messy art, going on long adventurous walks with her camera, or poking around over at bohemianizm (http://www.bohemianizm.com/). You can find out about Desirée O and her work at http://DesireeO.com/ or follow her on Twitter @DesireeO.
Celebrities
Celebrity News
Celebrities Music