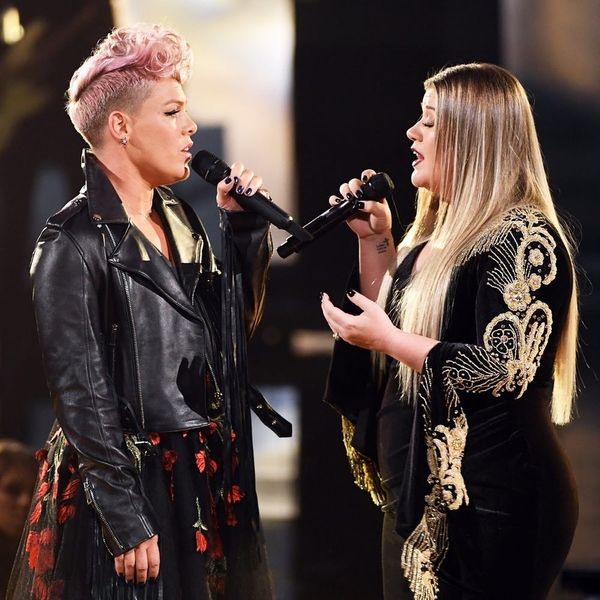 The 2017 AMAs promised us an epic first-time duet between pop divas Pink and Kelly Clarkson, and it did not disappoint. Covering R.E.M.’s tearjerker of a hit “Everybody Hurts,” the performance honored those who serve as first responders, and it was every bit as emotional as it sounds.

Pink opened the song before Clarkson joined in, and together they made their way to a smaller stage among the crowd. As they traded lyrics about hope in the face of difficulty, images of the resilience and strength that stemmed from the many tragedies of the year played behind them.

Before the performance, Jamie Foxx delivered a heartfelt statement thanking the men and women who have put their lives on the line for others during the numerous catastrophic natural disasters and deadly violent attacks that have dominated the news cycle in 2017.

“As this year comes to a close, we look forward to 2018, with hope,” Foxx continued. “For even as we mourn those who were lost, we know this: Together, our strength will pull us through. Together, we shall overcome the pain. Together, we can unite as a people and as a nation.”

Before the AMAs, both Pink and Kelly Clarkson admitted they were “fangirling” over the other, and it continued on social media in the hours before the show. “This woman has a direct line to outer space with that voice,” Pink wrote. “I feel lucky to stand next to her when she sings. Tonight will be an honor for me.”

Before I frame this picture and hang it in my office to stare at like a creepy stage 5 clinger I thought I’d share it with y’all 😊🤣 #tonight #AMAs2017 pic.twitter.com/ODMUvq6oWU

Clarkson shared the same image of the two of them on stage at rehearsals together, writing that she figured she’d share it with her fans before hanging the picture in her office and “[staring] at it like a creepy stage 5 clinger.” The love is so strong between these two.

What did you think of Pink and Kelly Clarkson’s performance? Let us know @BritandCo!