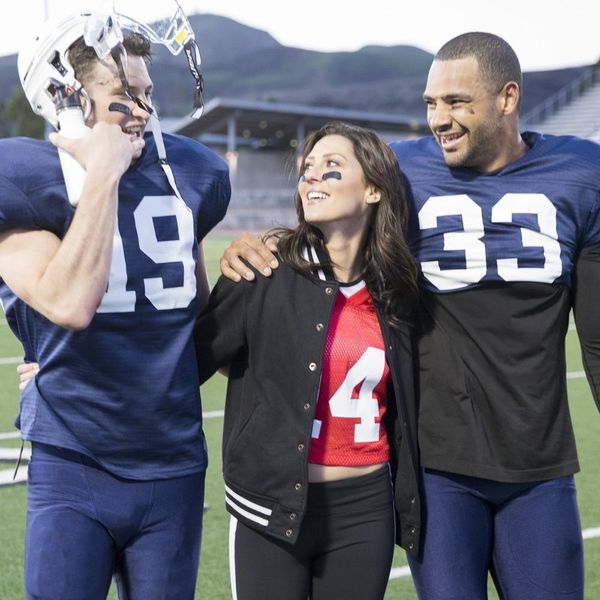 This week’s episode of The Bachelorette sent not one but two of the guys to the hospital for pretty serious injuries. David Ravitz fell from the top bunk while he was sleeping and ended up in intensive care, and then Clay Harbor had to be carted off in an ambulance after hurting his wrist during a football date with Becca and nine of the other men. Harbor is a free agent in the NFL, so he’s no rookie on the field, but apparently the competition on The Bachelorette is brutal.

“Got hurt playing football on The Bachelorette. That’s pretty funny,” he quipped when it first happened.

It was less funny the next day, when he learned he would need surgery for the injury. Harbor supports his family through football, so even though he already had a rose from Becca Kufrin, he decided to leave the competition to focus on his health.

“I want to thank everyone for the love and support,” Harbor tweeted after the episode aired. “Definitely the hardest decision I’ve ever made but I believe everything happens for a reason. I am working hard to get back on the field and turn this negative into a positive.”

In subsequent tweets, he thanked the “whole Bachelorette family” for an “amazing” experience, writing, “I don’t regret my decision to come on and would gladly give my wrist for a chance at love.” He also explained that after the date was filmed “months” ago, he underwent surgery and a “tough rehab” and is “finally ready to play some football.” He’s hoping to get onto a new NFL team for the upcoming season.

Clay Harbor joins @gmfb for an exclusive interview fresh off his exit from @BacheloretteABC. @clayharbs82 reveals who he thinks will be Becca's (@thebkoof) final 3 bachelors. ⬇️ pic.twitter.com/cLwb9HS3Xq

In the meantime, he’s still following Kufrin’s search for love on TV. And since he’s out of the running, he shared his views on who he thinks Becca’s final three bachelors will be. “So if the guys were like NFL franchises,” he told Good Morning Football hosts Kay Adams, Nate Burleson, and Peter Schrager, “the Patriots are always the favorites. So I’ll go with Colton is the Patriots.”

“I’d say the horse guy, Blake, he’s the Eagles,” Harbor added before throwing a curve ball into the top three. “But then, you’ve got an up-and-coming Jaguars team, who’s Garrett. Garrett might surprise some folks.”

We’ll have to wait to see what the future holds for the remaining men!

Who do you think will be in Becca’s top three? Let us know @BritandCo!

Kat Armstrong
Kat has been a writer, social media maven and mom for longer than she's willing to admit. She's also spent time in front of and behind the camera, interviewing celebs, politicians and acting as a producer for fashion and artistic photography shoots. When she isn't writing for various orgs and publications, she's hanging with her kids, husband and French Bulldog, Peter, in Toronto, Canada.
The Bachelorette
TV
The Bachelorette TV
More From TV