This New Coffee Is like Drinking Red Wine for Breakfast 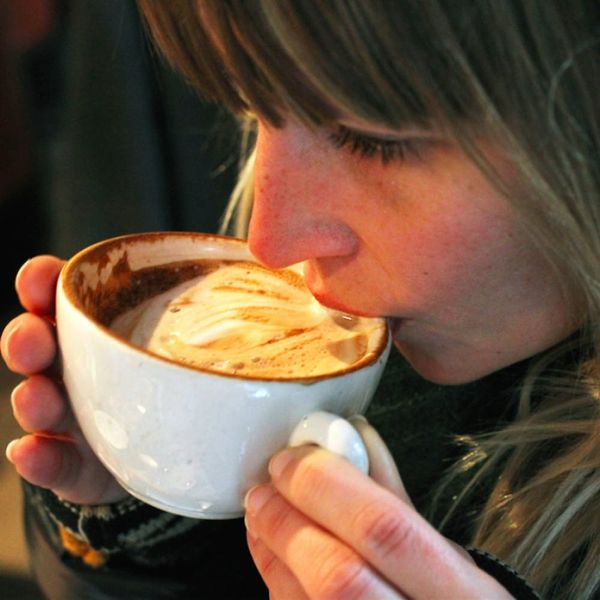 We’ve all probably looked at the clock on a particularly bad Monday morning at the office and wished wine wasn’t frowned upon as a morning beverage choice (it’s five o’clock somewhere, right?! And red wine helps with memory, so… productivity?!). But obviously getting boozy before breakfast is not only a fireable offense, but it’s also not the healthiest way to start the day. That said, research has proven that red wine has health benefits, including a number of heart-healthy antioxidants that you’ll wish you could find in your morning cup of coffee. Welp, now you can.

An organic chemist in New Hampshire recently developed a coffee bean infused with resveratrol, the antioxidant found in the skin of grapes used to make red wine. Glen Miller calls the bean CoffVee; he was able to infuse coffee beans with resveratrol during the roasting process and says that a cup of coffee made with CoffVee beans provides the same amount of antioxidants as a single glass of red wine.

Miller discovered the technique by experimenting in his home kitchen. He’s studied antioxidants for years as part of his academic research and firmly believes in the polyphenolic compounds to help prevent things like cancer, Alzheimers, diabetes and depression.

As we all well know, the French have the answers to just about everything, and Miller cites the “French Paradox” as a testament to the compound’s healing powers. Though the French maintain a high-fat diet, their consumption of red wine (and thus, resveratrol) helps keep their incidence of heart disease low. That, combined with their perfectly mussed bedhead, might not seem fair — but at least now we have a better understanding of part of the equation!

Miller started a roasting company, Vera Roasting, to market and sell his newly patented beans; so far, that’s the only place to get the antioxidant-packed CoffVee, starting at $14.95 per bag. Gotta admit: We’re pretty interested in trying a bag of this java.

Tweet us @britandco to let us know if you’re into the idea too!