This Type of Therapy Could Be a Possible Treatment for IBS 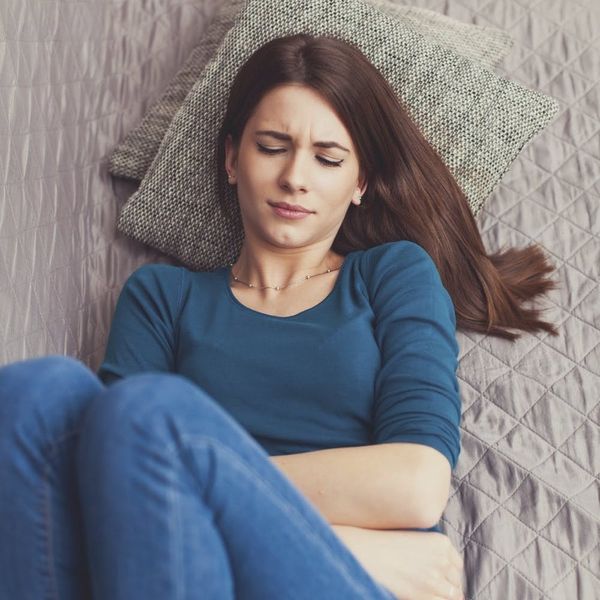 Dodging certain foods, avoiding bodycon dresses, and planning your whole life around always being near a toilet are the less-than-thrilling effects of living with Irritable Bowel Syndrome (IBS). Although it’s pretty common, affecting 10 to 20 percent of the global population, doctors are still scratching their heads over what exactly causes IBS and how best to treat it. There are medications that can help ease the symptoms, but a new study published in the British Medical Journal’s aptly named publication Gut has found reasons to support Cognitive Behavioral Therapy (CBT) as an additional treatment. Here’s why CBT could be one answer to IBS.

The National Institute for Care and Excellence (NICE) says that IBS should be diagnosed after six months of pain and/or discomfort in your abdomen that is relieved when you manage to pass a bowel movement; bloating; and/or changes in the quality or quantity of your bowel habits. For example, you might be getting constipation or diarrhea (or both at different times), or having to poop more frequently, or feeling like you can’t quite get everything out when you go. You might also be passing mucus. These symptoms may be exacerbated after eating. NICE also notes that the pain can be anywhere in your gastrointestinal (GI) tract, and it’s not necessarily in the same spot all the time (unlike cancer, which tends to consistently trigger pain in the same place.)

As we mentioned, it’s not entirely clear what causes IBS. Sean Paul, MD, a psychiatrist and founder of telepsychiatry practice NowPsych, explains that even though the symptoms are very real, IBS doesn’t have an obvious physical cause that can be tested. The leading theories, he says, “are impairments in normal gut mobility (the way the intestines move to pass food down); visceral hypersensitivity (the GI tract in people with IBS is more sensitive to any stimuli like bloating, gas etc.); inflammation following an infection (bacterial, parasitic, viral etc.); alterations in gut flora (microbiome).”

In addition to these physical components, your psychological state may also be a contributing factor to IBS. Priyanka Upadhyaya, PsyD, a psychologist who runs Thrive Wellness and Mediation in New York and New Jersey, and works as a clinical instructor for the Department of Psychiatry at New York University, explains that experts are considering other possible causes of IBS, including, “the role of genetic predisposition; a major life stressor (like a motor vehicle accident, sudden death of a loved one, loss of job, financial stress); or trauma (like a rape, assault, etc.).” She adds, “Chronic stress is a major culprit when it comes to IBS.”

Even if psychological stress isn’t the singular cause of IBS, it can be a major trigger. It might seem surprising that your emotions can be so linked to your gut, but this is something we regularly acknowledge without really thinking about it. “Often when people feel anxious or nervous, they can feel it in their ‘stomachs,’ and some even have nausea or diarrhea during these times,” Dr. Paul points out.

Dr. Upadhyaya explains that your brain and your gut are parts of two different nervous systems — the central nervous system and the enteric nervous system, respectively — which communicate through hormones, neurotransmitters, and nerves. “The pathway that carries the message… between the brain and the gut is called the gut-brain axis,” she elaborates. “Chemicals like serotonin — a neurotransmitter heavily implicated in depression, anxiety, and other mental health conditions — carry the communication between these two nervous systems.” IBS may be a result of an issue with that communication, she explains.

Why does CBT help IBS?

As the name suggests, CBT is a type of therapy designed to help people recognize and address difficult emotions. “CBT focuses on identifying and helping people to change thoughts and behaviors that are causing problems for them,” explains David D Clarke, MD, who was a practicing gastroenterologist for 25 years and is now a teaching physician at Oregon Health & Science University in Portland, and the President of the Psychophysiologic Disorders Association (PDA). “It can help improve emotional regulation and enable development of coping strategies for the patient’s current life issues.”

Since IBS is triggered or worsened by stress, using CBT to help people cope with that stress could mean they don’t get such severe IBS symptoms. That Gut study looked at whether adding CBT to a traditional IBS treatment plan improved outcomes for patients. They divided a group of people with chronic IBS into three groups. All groups received the standard treatment, including medications and practical advice on modifying diet to exclude foods that can trigger symptoms. In addition, one group was given a self-help manual with homework tasks and a total of eight hours of therapist support on the phone, and the last group used a web-based service that gave them tasks based on CBT practices, and also received two and a half hours of therapist support over the phone. The researchers found that both groups who received CBT support showed more improvement in their IBS symptoms, and in the impact of those symptoms on their daily lives, compared to patients who received the standard treatments.

Dr. Upadhyaya says that CBT has a lot to offer as a treatment, “as it helps individuals reduce their distress, improve health by lifestyle changes, and reframe their physical problems [including IBS] in ways that help the person feel more in control of their health and bodies.” It can help people feel better able to cope with physical problems, which can help reduce depression and anxiety, she adds. However, it won’t help everyone: People with very severe mental health problems caused by things like childhood abuse will likely need more intensive treatment than CBT, cautions Dr. Clarke. It’s also worth noting that CBT is a supplement, not a replacement, for current treatments and for regular check-ups with your doctor: Medications for IBS include laxatives to help with constipation, anti-diarrhea medications, anticholinergic drugs to help with bowel spasms, and antidepressants to help treat psychological issues like depression and anxiety which are linked to IBS. So CBT is not a cure, but it does appear to have an impact which could lessen the number of hours you spend curled up on the couch with a hot water bottle, even as it increases the number of bodycon dresses you get to wear.

RELATED: 4 Ways Your Body Is Telling You to Check Your Mental Health