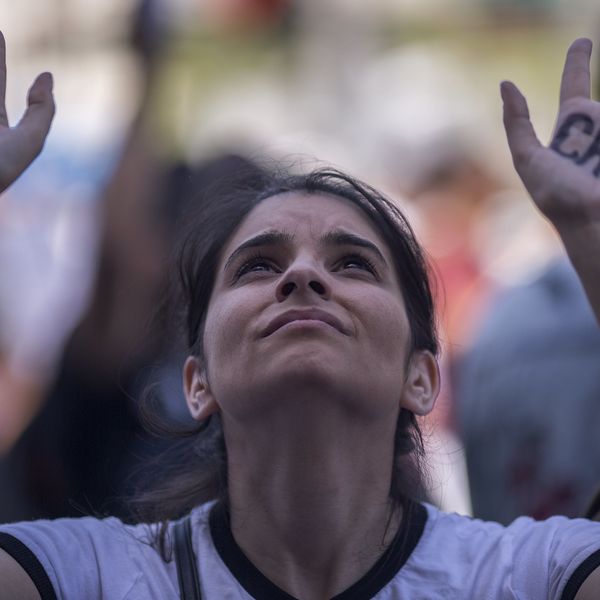 Since President Donald Trump first took office in January 2017, the federal government has cracked down hard on immigration, culminating in the separation and detention of children away from their parents seeking asylum in the US. While judges and on-the-ground organizations are working to help reunite families following a reversal of the Trump administration’s family separation policy, many companies are quietly (or not so quietly) donating proceeds from their sales to support immigrants, newcomers and low-income Americans get everything they need to thrive. Here are nine companies giving back and making a difference so you can spend your money and help make an even bigger impact. (Photo by David McNew/Getty)

Google: When the first “Muslim travel ban” was signed into Executive Order, internet giants Google stepped up to the plate, creating the Google Crisis Fund. The fund, which has helped victims of Hurricane Harvey, tracked Zika virus and more focuses mostly on making sure that refugees get the support they need, both within digital spaces and with simple things like supplies and support. The fund also supports Black inclusion, education and economic opportunity throughout the US and the world. (Photo by Sean Gallup/Getty)

Instacart: The grocery delivery company’s CEO Apoorva Mehta donated $100,000 to the ACLU last year, and supports lawyers working to help legitimize undocumented or contested immigrants living in the US. In a Twitter thread last year, the Silicon Valley exec explained that as an immigrant, he wanted to help other immigrants and that in addition to the donation to the ACLU, Instacart would be funding office hours with immigration counsels for employees of the company and their families in need. (Photo by Steve Jennings/Getty Images for TechCrunch)

Starbucks: While the coffee giant has had some recent inclusivity-related bumps of its own, CEO Howard Schultz has created a plan to hire 10,000 refugees across all Starbucks locations (in 75 countries!) by 2022. Partnering with the United Nations Refugee Agency, the coffee company is committed to train and employ people displaced from their homes, helping the economy in the process. (Photo by Joe Raedle/Getty Images)

Facebook: CEO Mark Zuckerberg created a fundraiser on his personal Facebook page to raise money for both the Texas Civil Rights Project and RAICES. In the initial post, the social media lord wrote, “Organizations like Texas Civil Rights Project and RAICES are doing great work helping families at the US border get legal advice and translation services, as well as documenting what is happening on the ground to make sure these stories are shared. I've donated to them and I encourage you to as well. We need to stop this policy right now.” (Photo by David Ramos/Getty Images)

TOMS: While many are aware of the TOMS One for One program, the company has additionally partnered with ANERA to provide over 1,000 pairs of shoes to refugee children in Lebanon and Gaza to ensure protection from soil-transmitted parasites. (Photo by Rachel Murray/Getty Images for Amazon)

Warby Parker: As with TOMS shoes, when you buy a pair of glasses at Warby Parker, the company donates a pair to a child in need while working to help educate adults to give basic eye exams. (Photo by Michael Buckner/Getty Images for Warby Parker)

FEED: Accessories company FEED was founded in 2007 by Lauren Bush as a way to help combat hunger both here in the US and abroad. The handbags and accessories featured by the company are all fairly made, and each product purchased can feed up to 200 people, depending on the price. (Photo by Dimitrios Kambouris/Getty Images for Food Bank For New York City)

Microsoft: Microsoft partnered with actress Angelina Jolie in 2009 to form Kids in Need of Defense (KIND), a network of lawyers representing minors who arrive in the US without a parent or adult guardian and facing deportation proceedings on their own. The company's president Brad Smith has called on the Trump administration to change its policies with regard to immigration. (Photo by Drew Angerer/Getty Images)

Dropbox: In a series of tweets, Dropbox CEO Drew Houston announced that the cloud storage company would be matching employee donations to organizations like KIND — and that he himself made a personal donation to the charity in support of detained and separated families. (Photo by Drew Angerer/Getty Images)

From Your Site Articles
Kat Armstrong
Kat has been a writer, social media maven and mom for longer than she's willing to admit. She's also spent time in front of and behind the camera, interviewing celebs, politicians and acting as a producer for fashion and artistic photography shoots. When she isn't writing for various orgs and publications, she's hanging with her kids, husband and French Bulldog, Peter, in Toronto, Canada.
Immigration
Current Events
Immigration Politics Activism
More From Current Events