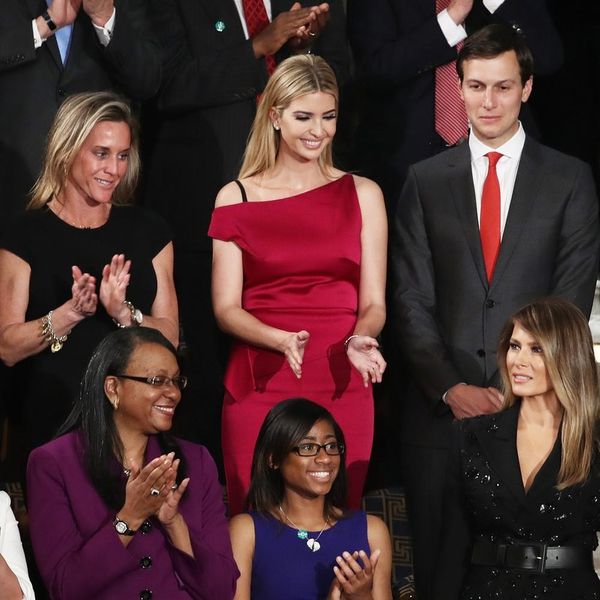 After news broke yesterday of female reporters being turned away from the Speaker’s lobby for wearing sleeveless dresses thanks to Congress’s business attire dress code, Twitter is clapping back.

Many are calling the dress code unfair, even noting that first ladies and daughters seem to be exempt from this ban (as Ivanka Trump wore a sleeveless dress to her father’s first joint session in Congress), while others see the dress code as another attempt to control women’s clothing choices.

@ktullymcmanus @bobbymacReports this comes from up top. I wasn't allowed into the Milan Duomo b/c of a sleeveless blouse in 100 degree F.

How are sleeved dresses (& also jackets & ties) "so essential to maintaining order and deliberacy in the House?" https://t.co/9zVj0qa2x7

So THAT'S why there aren't more women in politics. We literally can't get in. https://t.co/4Za6pb2SeX

In congress, 1st ladies and 1st daughters can go sleeveless –
but not female reporters or others https://t.co/oUyqA6e3Zf

.@SpeakerRyan, about your "no sleeveless outfits" rule…. Ivanka wore one to Trump's Joint Session of Congress address. Comment? pic.twitter.com/z6mhjZavs8

I'm wearing a sleeveless dress in my Senate press badge pic. Who knew that would turn out out to be a rebellious act https://t.co/PyI67JhLbE

Meanwhile, others are saying that the dress code, which by the way only states that women have to wear “appropriate attire,” is not sexist or unreasonable because men are also required to wear sleeves. One user even points out that the room is a cool 50 degrees year round anyway, so whether sleeves are required is irrelevant.

1. this rule is 100 percent not new. 2. ive seen congressmen be forced to put jackets on before going to the floor. https://t.co/QiYTLMVzJF

Ummmm… has no one ever had a job where they were required to wear professional attire? https://t.co/ORd9BP6jXM

The no sleeveless rule in Speaker's Lobby is totally fine. Men have to wear jacket and tie. It's also approx 50 degrees there year round https://t.co/4gxttfyIq1

Yes, the rules have been around for years. I've been prevented from going into the speakers lobby because I was not wearing a suit jacket. https://t.co/06Jc9SvQaC

What do you think of the Speaker’s Lobby’s dress code? Tell us @BritandCo!

Shea Lignitz
Shea can be found in the nearest bookstore or brewery, exploring the great outdoors, or blasting Led Zeppelin. She grew up in the cold and rain of Northern California's redwoods but is currently wandering around Texas.
Controversy
Style News
Controversy Politics