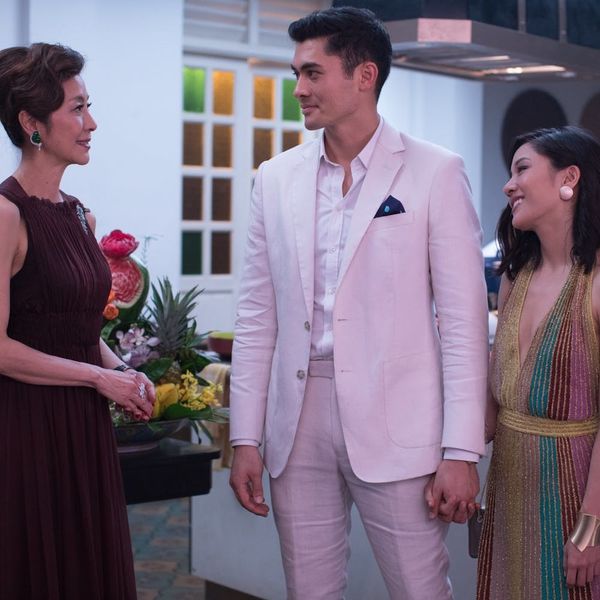 The first full-length trailer for Crazy Rich Asians is here, and it doesn’t disappoint. Over the course of two-and-a-half minutes, we see Rachel (Constance Wu) accompany Nick (Henry Golding) to visit his family and friends in Singapore, and plenty of drama ensues. But fans of Kevin Kwan’s trilogy will notice that there are some big differences between the Crazy Rich Asians trailer and the book. (Some spoilers ahead.)

The biggest change in the trailer is that in the movie version of the story, Nick’s family is well-known in Singapore. When Rachel visits her friend Goh Peik Lin (Awkwafina), Peik Lin’s father, Goh Wye Mun (Ken Jeong), immediately recognizes Nick’s name. Wye Mun informs Rachel that Nick’s family includes “the biggest developers in all of Singapore.” But in the book, that interaction is just the opposite. Rachel meets the Gohs before meeting Nick’s relatives, and none of Peik Lin’s family members have a clue who “Nick Young” is.

In the novel version, Nick’s extended family is extremely dedicated to keeping their wealth under wraps. They make sure that stories about them never end up in local newspapers. And Nick’s grandmother’s mansion, Tyersall Park, is so secluded that Peik Lin’s family doesn’t even know the property exists.

It’s an understandable Hollywood change, though it will be interesting to see how it plays out if all three films are made. The family’s desire for privacy comes into play, in particular, in the third book, Rich People Problems, with Nick’s cousin Astrid (Gemma Chan). Still, this is only the first trailer, and it doesn’t show Nick’s grandmother yet.

The other big departure from the book appears to be Rachel’s relationship with Nick’s mother, Eleanor (Michelle Yeoh). In the novel, Eleanor is sneaky in her attempts to break up Nick and Rachel. She goes as far as to hire a private investigator to dig into Rachel’s family’s past, a detail that will probably still make it into the movie. But she and Rachel don’t outwardly snap at each other, at least not when they first meet, the way they do in the trailer.

Having Rachel and Eleanor at odds from the beginning could also alter Rachel’s storyline with Nick. Toward the end of the book, the leading couple briefly breaks up after Eleanor reveals what her investigator finds. But if Rachel and Nick’s mom have been disagreeing the whole time, she might stick by Nick’s side. Again, though, Rachel and Eleanor’s dynamic could change once Nick’s grandmother, Su Yi, comes into the picture. Su Yi, like Eleanor, doesn’t approve of Rachel, though she’d never casually tell her as much during dinner.

Overall, the differences might not be as significant as they seem from the trailer. Kevin Kwan is an executive producer on the movie, so he likely had a say in any major changes. And for fans of the trilogy, just the fact that the movie will be released in four months is cause for celebration.

Did you read Crazy Rich Asians? Let us know @BritandCo!

Meghan DeMaria
Meghan is a freelance journalist based in New York City. She is obsessed with TV, especially sitcoms. She's previously worked at Refinery29 and TheWeek.com and has written for Bustle, Women's Health, and more. When she's not writing, Meghan can be found looking for the best pulled pork New York has to offer.
Books
Movies
Books Movies
More From Movies