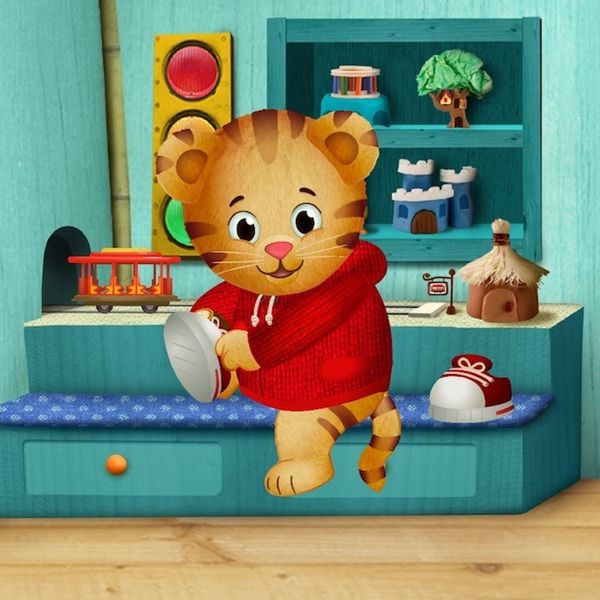 If you’re obsessed with NBC’s fall TV lineup or love checking out trailers for upcoming shows, you might want to consider a career in the TV industry. In our Women in TV series, we chat with female producers, writers, and crew members who prove that being in the entertainment industry isn’t just for boys. We’ve talked with a This Is Us writer about how she and the team create those heartbreaking episodes, and this week, we get the inside scoop from head writer Becky Friedman on how Daniel Tiger’s Neighborhood is made. Friedman tells us how she made the leap from being a preschool teacher to writing for preschoolers and what she loves about continuing the legacy that children’s television legend Fred Rogers created.

For parents with young tots, you might recognize Becky Friedman’s name from your preschooler’s favorite TV show Daniel Tiger’s Neighborhood or as the author behind some of the children’s books featuring Daniel Tiger. The head writer of the popular PBS series is a mom of two herself who is also working on Esme and Roy, a new show for Sesame Workshop. The former preschool teacher started working in online advertising for MTV, then changed careers to be the assistant to the creator of Nick Jr. show Blue’s Clues. Ten years later, Friedman has worked her way up to head writer and loves her career in children’s television.

Becky Friedman: Currently I’m working on two different projects. I’m the head writer of Daniel Tiger’s Neighborhood, which airs on PBS. My responsibilities fall into a few different buckets. On the larger level, I work with the producers and child development professionals to shape the content and choose the stories we want to tell for each season. In the more day-to-day bucket, I’m the keeper of the voice of the show so every show idea, every script, and every piece of dialogue goes through me. I have to make sure that we’re staying true to the show, that the characters sound like themselves, and the themes and story arcs are working on all levels. It’s a lot of writing story ideas and scripts, as well as editing everyone else’s. Lastly, I find and communicate with the freelance writers that we work with.

The other project I’m working on is a new show for Sesame Workshop called Esme and Roy. My title on that show is story editor. I have very similar responsibilities on that show (in television, what a title means often changes from production to production), but the difference is that I report to a head writer/show creator, and she’s the one who’s making the more macro decisions about the voice and vision of the show, and doing a larger part of the writing and editing. I’m doing similar things, but as a support to her, rather than doing it on my own.

BF: It really depends. I try very hard to make certain days “writing days” and certain days “meeting/admin days” because I really need long periods of time where I can sink into the writing without it being broken up with meetings or distractions. On writing days, I’m either at the little office (read: garage) in the back of my house, the library, or a coffee shop, vacillating back and forth between productive writing and editing, and just torturing myself (as any writer knows, these two things always go hand in hand!).

On meeting days, I might have a Skype call with the Daniel Tiger’s Neighborhood team in New York to discuss a script, then send off emails to writers giving them notes on how to revise their scripts, and then head to the Sesame Workshop satellite office in Burbank to have a brainstorm generating new episode ideas. Also, on any given day I might be picking up my daughter from preschool, or taking her to a doctor’s appointment, or meeting a friend or someone else in my industry for coffee or lunch. I used to be a full-time staff employee at a production company, where I would go into the same office every day and work pretty standard hours. For the past year and a half, I’ve been freelance, and I love the flexibility and creativity of it.

B+C: What is your favorite thing about working on Daniel Tiger’s Neighborhood?

BF: I love that I’m working to bring the incredible vision and philosophies of Fred Rogers to today’s kids [Daniel Tiger’s Neighborhood is an animated spin-off of Mister Rogers’ Neighborhood]. I love being part of his legacy. I also love knowing that my work is connecting with kids and families in their everyday lives. Every time I hear a story or see a video of a child using one of our strategies, I get a little thrill! I feel so lucky to be creating this show with people I love and admire. We’ve all been doing the show together for so long that at this point, we’re family.

BF: Before getting into television I was a preschool teacher. I loved it, but felt like I needed to take a break and see what else was out there for me, career-wise. I moved cross-country and got a job working in online advertising at MTV and immediately hated it (oops), but quickly realized that Viacom housed not only MTV, but also Nickelodeon, Nick Jr., and Noggin. A lightbulb went off. I could tap into my passion around working with kids, but put it to new use in the world of kids’ media. I did informational interviews with anyone who would talk to me and applied to (and got rejected from) a handful of children’s media jobs before I finally landed in the brand-new office of Out of the Blue, a tiny upstart production company started by Angela C. Santomero, the creator of the breakthrough Nick Jr. show Blue’s Clues and all-around preschool TV visionary. She was looking for an assistant, and luckily, I got that job, and then stayed with the company for 10 years, working my way up from assistant to head writer.

BF: Writing for preschool children is harder than it looks! For one thing, preschoolers are extremely visual, which means if you talk about something, you have to see it. This can be challenging for writers, and I’m forever reading scripts that are “talky.” Also, preschoolers have different language requirements than any other age group. They are extremely concrete and literal, and they don’t understand things like sarcasm, puns, or wordplay, which are the meat of a lot of older kids’ TV. Lastly, preschoolers are brutal critics: They can smell characters that don’t feel or sound like them, and if they don’t like what you wrote, they will just get up and walk away!

BF: I think women are getting into more decision-making roles on all levels: as executives at networks, executive producers at production companies, head writers, et cetera. It’s exciting because with women in these roles, the content that gets made and distributed is changing, which means that female viewers (of all ages) will get to see themselves reflected more authentically onscreen, and male viewers will understand the rich fabric of female experiences on a deeper level.