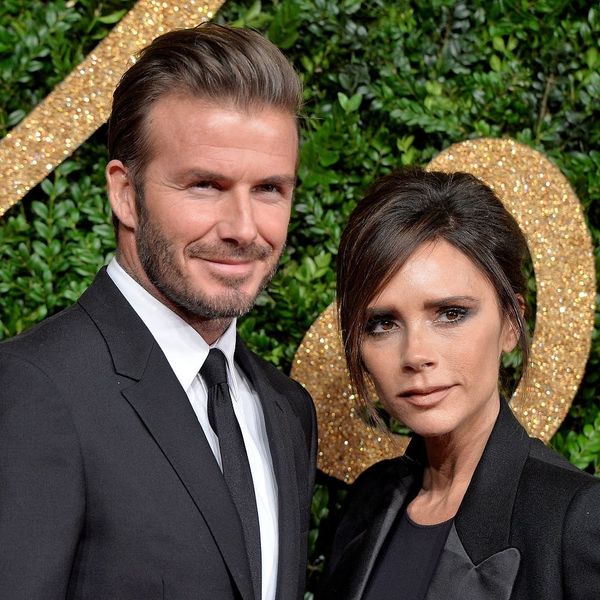 After 18 years of being happily married, David and Victoria Beckham are just as much in love today as they were when they first set eyes on each other. With nearly two decades together, two hugely successful careers, multiple tribute tattoos, and four children, the pair are looking back on their love in absolutely perfect throwback pics.

Both David and Victoria Beckham took to Instagram today to mark their anniversary, and we’re so thrilled (and honored!) they’re giving us a glimpse at their adorable and gorgeous life together..

Victoria chose to pop a pic of their wedding day onto social media with the simple yet sincere message, “I love you 🙏🏻✨Kisses x.” The photo shows the young bride rocking short hair (very Posh Spice of her!) and wearing her glorious champagne-colored gown. She stands beside David, who wears an all-white tux and holds a sleeping baby Brooklyn while smiling adoringly at his new wife.

Did you notice that David is holding both Victoria and Brooklyn’s hands at the same time? So sweet!

David, on the other hand, chose a red-carpet moment showing the duo in matching leather outfits. He added the caption, “Wow we really did this ☺️ Happy Anniversary to an amazing wife, mummy and strong business woman 🙏 ❤️ @victoriabeckham @brooklynbeckham @romeobeckham @cruzbeckham #Harpernotoninstagram Love you x.”

The two also celebrated a little early last night, with Victoria Snapchatting a glimpse at her hubby (with bunny ears, natch) as well as a look at the fire they were enjoying. It certainly seems like these two know how to keep the romance going.

Can you believe David and Victoria Beckham have been married for 18 years? Let us know @BritandCo!