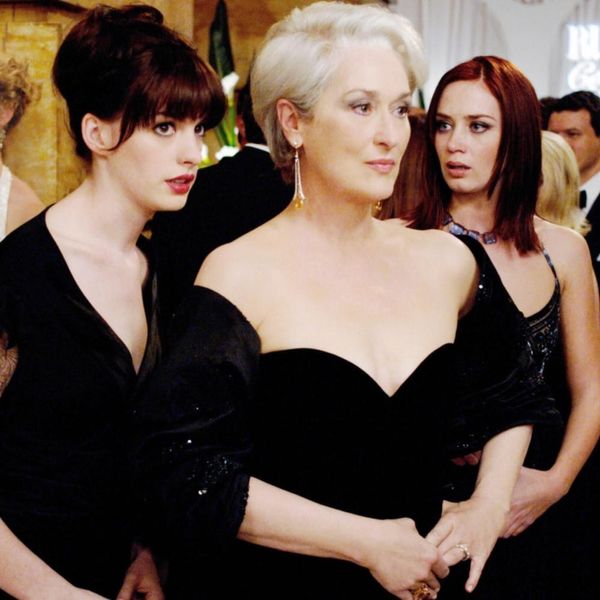 It’s been over a decade since The Devil Wears Prada first rocked our world back in 2006, and to this day, the flick remains one of our movie-night staples. But little did we know it *could* have been a completely different film, had one very key 45-second scene not been deleted.

Although the clip was first made public when the DVD was released, it’s resurfaced once more to capture the world’s attention after being posted to Twitter by Buzzfeed writer Spencer Althouse. The scene, which ultimately ended up on the cutting room floor, takes place at the gala Andy Sachs (Anne Hathaway) attends instead of her BF’s birthday in order to help her boss Miranda Priestly (Meryl Streep) keep on top of things by whispering key names and facts in her ear. While it was classic moment in the film to be sure, the way we view Miranda might have been forever changed had it played out the way it was originally intended to.

I'm just seeing this deleted scene from The Devil Wears Prada for the first time, and honestly it changed the whole movie for me pic.twitter.com/6Zkr6UxHQO

In the alternate version, just as Andy is about to rush off to see her man, Miranda’s husband (James Naughton) drunkenly makes a surprise entrance, yelling, “When do we eat?”

“Darling, there you are,” Miranda replies warmly before he continues (in earshot of everyone), “It’s been a banner evening. Three people didn’t recognize me, one called me Mr. Priestly, and now the d*mn bartender won’t even serve me.” Oh, my.

Start believing in yourself and focus on where you want to be. Successful and unsuccessful people do not vary greatly in their abilities. They vary in their desires and belief in themselves to reach their potential. Quote via @must_act 💙

The most cringe-worthy moment of all, however, comes when he turns to Elias-Clark chairman Irv Ravitz (Tibor Feldman) to drop this insult: “Why don’t you get me a drink? He’d have to listen to you, wouldn’t he little guy?” Yikes!

Luckily, Andy, seeing her boss in distress, swoops in to distract the chairman in the nick of time, getting a major “Thank you” from the Runway editor-in-chief in the meantime as the two lock eyes across the room.

Needless to say, the touching moment between Andy and her previously presumed tyrant of a superior is one that diehard fans could barely handle. In fact, they took to Twitter to thank filmheads for having the foresight to pull it.

Miranda would NEVER do that. That 'thank you' is so out-of-character! Thanks for snipping that out. https://t.co/B1swgdViCj

wow, i have never been so thankful a scene was cut from a movie. thank you devil wears prada gods 🙌🏽

Althouse, who saw it for the very first time this week, concurred, declaring, “It’s so bad, it’ll ruin the whole movie for you.”

This deleted scene from The Devil Wears Prada is so bad, it'll ruin the whole movie for you https://t.co/s0fO70vuva pic.twitter.com/lWHorV6z64

Looks like we dodged a bullet of conflicted emotions with that one: Phew!

What do you make of the deleted scene? Tweet us @BritandCo.

Barbara Pavone
Barbara Pavone is a pop culture-obsessed writer based in beautiful (but ridiculously cold) Montreal, Canada. When she's not working, she's sipping on a Pimm's Cup and daydreaming about her celebrity hero, Saint West.
Movies
Movies
Movies
More From Movies