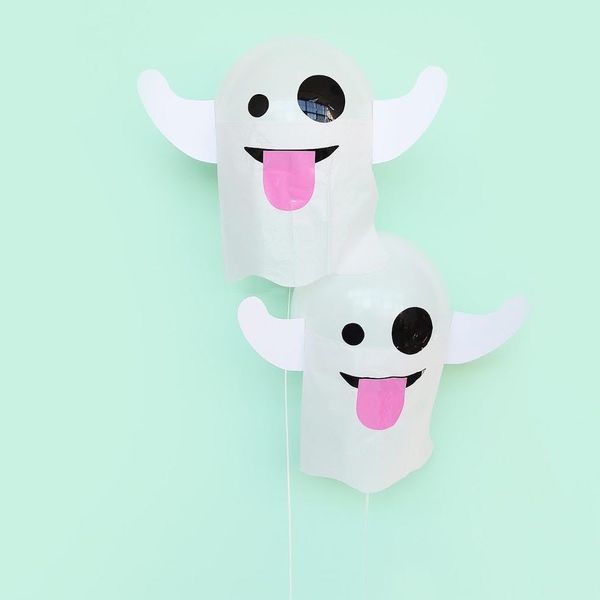 Halloween will be here before you know it. Prepare for the spooktacular holiday by getting creative with your DIY Halloween decor now. You save the stress of last-minute pumpkin carving and have plenty of decorations to use for years to come. With these 27 unique Halloween decoration ideas, you’ll have the most festive house on the block (and maybe even the entire neighborhood).

1. Emoji Ghost Balloons: Why be spooky when you can be cute? I mean, who doesn’t love emojis?! (via Aww Sam)

2. Hanging Spider Balloons: Could these spiders get any fancier? Nope! (via Studio DIY)

3. Blood-Splattered Runner: Dexter called. He wants his table runner back. (via Brit + Co)

4. Halloween Banner: Step aside, spiders and monsters, and make way for some lovely home decor. (via Brit + Co)

5. Gift-Wrapped Pumpkins: It’s still way too early to think about wrapping Christmas presents, but wrapping pumpkins? We’re all over it. (via Brit + Co)

6. Camp-O-Ween: Camping can get pretty scary with this Halloween-themed decor. (via Boxy Colonial)

8. Stack-o’-Lantern: However you decide to decorate it, our patterned stack-o’-lantern is as fun to make as it is pretty to display. (via Brit + Co)

11. DIY Candy Corn Flamingos: Add a little party to your lawn with these candy-inspired yard decorations. (via The Glitter in My Tea)

13. DIY Pumpkin Decanters: Update your bar cart for the season with a tiny pumpkin and some paint. Then mix up some green cocktails for your epic party. (via A Kailo Chic Life)

14. Gothic Glam Mirror: It’s amazing what matte black spray paint can do to transform cheap plastic decor. With just some hot glue and a mirror, you’re in business. (via PMQ for two)

15. DIY Flair Pumpkin: You’ll have to dig deep into your existing collection, or start snatching them up now if you want to cover an entire gourd. (via A Bubbly Life)

16. Bat Wreath: Keep it simple with some spooky bats. (via Tell Love and Party)

17. Costume Skull: A layer of gold, followed by a mask or silly costume element, can really do a lot to bring some LOLs to your decor. (via A Beautiful Mess)

18. Cross-Stitch Pumpkins: This one will likely take you a bit to do, but isn’t the end result oh-so worth it? (via Aww Sam)

19. Moon Phase Lights: For a minimalist approach, these string lights are the ultimate All Hallow’s Eve decoration. (via The House That Lars Built)

21. Watercolor Pumpkins: You can carve them later, but in the meantime, their abstract nature will add some character to your store-bought stuff. (via Paper & Stitch)

22. Ghost Emoji Mugs: Enjoy a cocktail from your balcony knowing that no one will coming knocking at your door. (via Bespoke Bride)

23. Spider Candles: Let’s be honest, these would look fabulous on display or in a pumpkin. (via Sarah Hearts)

24. Stranger Things Diorama: It’s like you’re back in school, only this time it’s all about your favorite Netflix show. (via Brit + Co)

25. DIY Ghost Piñata: You may want to leave these out year-round, but just in case you don’t, they’ll do the trick for the party you’re hosting this October 31. (via Make + Tell)

26. Felt Ghosts: These are meant for the 31st but will look absolutely adorable in the run-up to it. Especially if the whole spooky thing isn’t up your alley. (via A Kailo Chic Life)

27. DIY Plaster Hands: Have you ever felt like the undead were reaching out from beyond the grave? In this case, they might actually be. (via PMQ for two)

From Your Site Articles
Cassandra Vega
Cassandra Ann is an AZ-based blogger and marketing maven. Documenting her everyday life via Snapchat (@CassandraLoved ). She’s a dog mom who’s obsessed with her four-legged kids and loves all things chic. More about Cassandra Ann can be found on her blog, CassandraAnn.com.
Halloween
Party
Halloween Halloween Decorations