This Graphic Designer’s Travel-Themed Wedding Is EVERYTHING 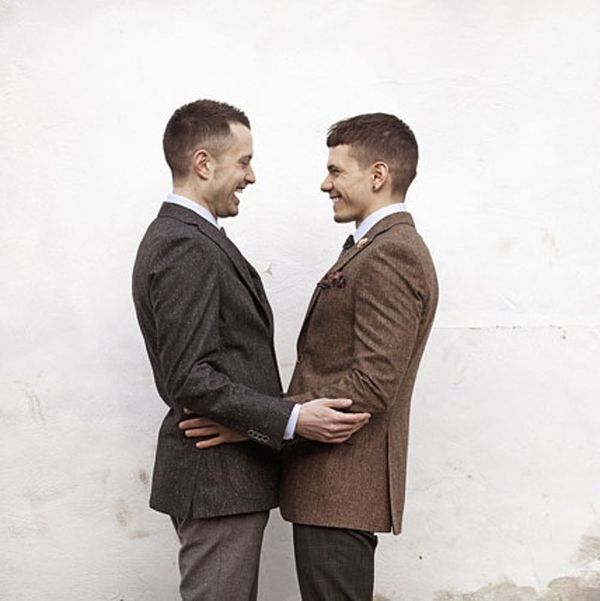 Mikey and Shaun fell in love at first flight… literally. They met at the Toronto airport on Christmas Eve and bonded over poor weather conditions and a canceled flight. Eventually, they found themselves side-by-side as the plane took off toward their future together. Since their love story is so charming, they decided it would be the perfect theme for their urban Toronto wedding.

While planning a wedding (in two months!) is no small task, they ended up creating an incredible travel-themed wedding full of vintage-inspired DIYs and lots of cool design elements created by Mikey (AKA Michael de Pippo). With their love story as their inspiration, they were able to have a wedding that was totally personal and totally them. Here is a breakdown of their overall vision, including all the fun design-y projects they made to create a unique, memorable and affordable event.

1. Industrial Urban Setting: Overlooking downtown Toronto in a beautiful industrial setting, Mikey and Shaun tied the knot in front of all their closest friends and family. Believe it or not, Michael and Shaun actually found their venue perched above their local market. The Market Kitchen, located inside the St. Lawrence Market, is a hidden gem in Toronto. Loaded with character and equipped with high ceilings, exposed brick, wine barrels and giant arched windows that overlook downtown Toronto, it was the perfect space to accommodate their theme.

2. Brand It: Mikey is a graphic designer and was determined to design invitations incorporating their “love at first flight” theme. Mikey says, “What designer wouldn’t love branding their own event!?” And brand it he did. He designed the invitations in two pieces — a postcard and an airline ticket. For the postcard, he drew an adorable interpretation of their first meeting at the Toronto airport and put their story on the back. To showcase more of his mad design skills, he used their initials to design the MVD>SSR airport-code graphic as their logo. This ended up becoming the logo for both the airplane ticket and the entire event.

3. Affordable Vintage Travel Decor: To keep the theme going, Mikey and Shaun went with vintage, travel-inspired decor. They rented vintage suitcases and crates from various antique stores and stacked them throughout the venue. To add some nice detail, they dressed up crates, barrels and suitcases with vintage cameras, globes, books and cameras. Mikey’s mom also contributed by handcrafting paper flowers made out of old street maps, which were then scattered throughout the decorations. And instead of dropping thousands of dollars on flowers, they opted for simple greenery. They bought various types of plants and cacti from IKEA, and repotted them in mason jars.

4. Punny Favors: For favors, they kept it simple with their favorite treat, Bounce Spirulina & Ginseng Balls, all wrapped up in a square kraft paper box. They also included “(e)motion sickness” bags with tissues for the ceremony. All of these adorable details were tied up, put together and made possible by the help of their closest friends. “I have to give serious props to our close friends, Muqu, Preeti, Ryan and Tyler. We were lucky to have a wedding party that all helped tremendously in different ways. As well as dozens of other friends and family members we tapped in to for help along the way,” Mikey says.

4. In-Flight Meals: Shaun is a nutritionist, so he wanted the food to be delicious and nutritious. While they originally envisioned simple grazing stations, their idea evolved to incorporate their theme. Thus, their in-flight meal boxes were born. They sealed each box with an MVD>SSR sticker, and voila! These were handed out to all the guests by the caterers at the beginning of the evening.

5. Photo Booth AKA Passport Station: The photo booth where guests could take their own professional-style “passport” portraits was a huge hit throughout the night. They even found a way to incorporate their cat, Abby. They bought her a dress, had a photoshoot and then printed a life-size cardboard cutout. She hung around the photo booth for most of the night.

Bonus! Late-night surprise entertainment was provided by Toronto-based drag queen, Katinka Kature. She performed lip-syncing to Britney Spears’ “Toxic” and donned a sexy flight attendant costume. Needless to say, a great time was had by ALL. “There was laughter. There were tears. By the end of the evening, every last (e)motion sickness bag was consumed. Honestly, the night was a huge success,” Mikey says.

If you have a creative DIY wedding you’d like to share, we want to know. Send a note to editorial@brit.co or leave us a message in the comments below.

Katie Bond
Katie is the Home + Parties Editor at Brit + Co. She works with writers to develop the most colorful, creative and Pinnable home content on the web. When she's not working away on her laptop, you can find her hanging out in surferburbia (aka The Outer Sunset), lounging in Golden Gate Park or learning to surf on her brand new longboard.
Design
Party
Design Designer Graphic Design invitations succulents vintage
More From Party