Don’t Gag, But This Woman’s New Comic Will Convince You to Eat Bugs 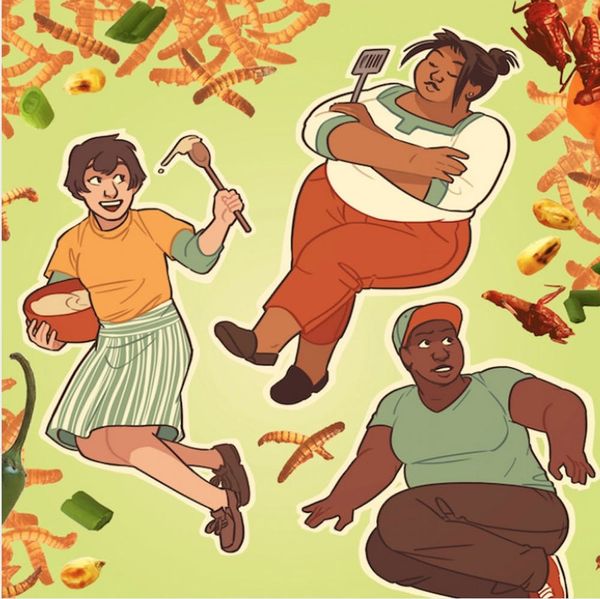 Soleil Ho has had a busy year. In between co-hosting duties on the wildly successful podcast on the intersection of race and food, The Racist Sandwich, Ho can also add “author” to her list of credits. With Blue Delliquanti, Ho is the co-author of a new food-related comic called Meal (Iron Circus Comics), which will be released on Christmas day. And, yes, it involves eating bugs.

The comic centers on a chef named Yarrow who moves across America to start working at a restaurant that focuses entirely on cooking with insects. Though it may seem like a leap at first glance, Ho tells us that its themes aren’t so far removed from those of The Racist Sandwich.

“Since I started working on The Racist Sandwich and thinking about food and race very intimately together, I’ve realized that insects and insect cuisine exist at this locus point because [like racialized people, insects are] very much a symbol of the Other,” Ho tells Brit + Co.

The two themes intersect in the comic, too. When a secondary character named Milani enters the scene as a potential love interest for Yarrow, she makes it very clear to Yarrow that she wants nothing to do with insect-related food. Yarrow, meanwhile, sets out to show Milani that insects are a staple of cuisine around the world. This dynamic sets the tone for Meal.

Ho, who is of Vietnamese descent, has had her own share of interactions with people who are uncomfortable about the idea of foods common to the non-Western world. She recalls her efforts to soothe their reflexes over one food item, in particular.

“Vietnamese people eat dogs, and that is a normal thing,” Ho tells us. “It’s not super wild or weird in Vietnam. But my whole life, when people would ask me that in the United States, I would say, ‘No, we don’t do it. That’s ridiculous!'”

In the comic, Ho wanted to make sure she and her co-author tackled this type of discomfort through Yarrow’s character’s interactions with others. “She doesn’t want to be judged or looked at,” Ho tells us, and admits that she pulled from her own experiences growing up to inform the character.

At first, like Ho, Yarrow tends to attempt to shy away from her own personal associations with insect cuisine because of others’ feelings towards it. But as Milani becomes interested in learning more about Yarrow, the character also takes an interest in Yarrow’s relationship to insect cuisine.


Ho hints that there is a possibility that Meal will be expanded beyond its current installation, but she has no idea what the future will hold. For now, Ho is happy at the response that Meal has garnered online, explaining that she loves the depiction of food in comics.

“It just amplifies the experience [of food] and makes it all that more amazing.”

Amanda Scriver
Amanda Scriver is a passionate storyteller and body image advocate based out of Toronto, Canada. When she isn't writing for various publications, she finds time to Keep Up With The Kardashians while partaking in life's greatest pleasure: the chip buffet. Don't ask her what her favorite restaurant is, it's complicated
Books
Diversity
Books Inclusivity Ladies First
More From Diversity