‘Dynasty’ Recap: Alexis Carrington Sure Knows How to Make an Entrance 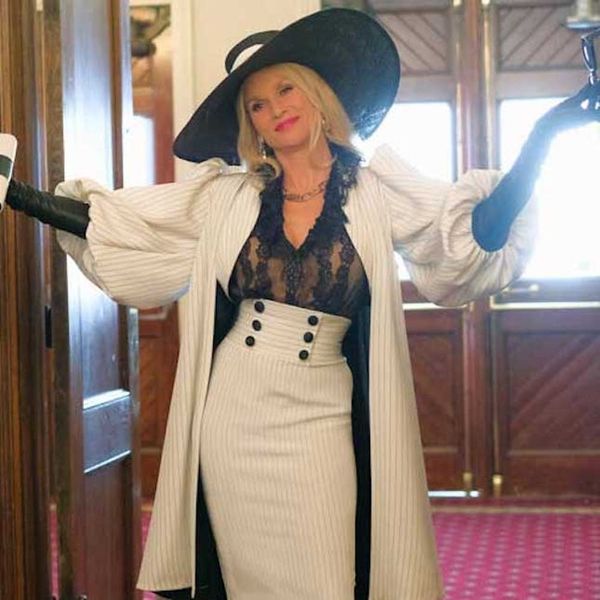 The big Dynasty bombshell this week is that Alexis is here, Alexis is here! But there were a couple of other jaw-dropping moments as well.

Fallon (Elizabeth Gillies) and Jeff (Sam Adegoke) have gone to war over her trickery in getting her hands on not only Morell Corp. but also 25 percent of Colby Co. As both Fallon and Monica (Wakeema Hollis) separately point out to him, he’s not the victim here. He was trying to double-cross Fallon and she’s the one who emerged victorious. So he kind of has to take it.

Monica has decided she’s had enough of Jeff’s Carrington drama, so she’s petitioning to take over their father’s guardianship and have Cecil (Hakeem Kae-Kazim) moved to her apartment. Jeff is suddenly very alone in the world.

But the bigger, better Fallon bombshell is that she’s trying to save face in the media, so she can’t annul her marriage to Liam (Adam Huber) just yet. When he accompanies her to her grandfather’s funeral, a woman recognizes him as “Chad,” “John and Laura’s boy.” He tells the woman she’s mistaken and Fallon doesn’t seem to give it a second thought, but we all know what this means — Liam is actually some guy named Chad and he’s obviously out to fleece Fallon for all he can. Or something like that. With this show, you never know.

Speaking of dear old granddad’s death, Anders (Alan Dale) finds out that it was Thomas who called immigration on Sam (Rafael de la Fuente), who is on the verge of getting deported. When Steven (James Mackay) calls in a favor with his ex-girlfriend, Melissa Daniels (Kelly Rutherford), to get Sam a visa, it involves sleeping with Melissa. You see, it turns out that Senator Daniels’ wife (remember, he’s the bigot that Blake was fundraising for) was involved with Steven about a decade ago when he was still figuring out his sexuality. And now that she’s lonely and bitter, she wants him to earn his favor with his body, which is decidedly not okay. But Steven does it because he loves Sam, who does end up with his visa.

After celebrating that Sam can stay in the country with some champagne from the Titanic (yes, seriously — this show, you guys), Steven awesomely uses his eulogy to basically tell his grandfather where to stick it and then proposes to Sam. Wow, that was fast. I mean, these two are great together, but seriously. This show is cramming like four seasons’ worth of content into one season.

Finally, Blake (Grant Show) is not dealing with his father’s death very well, and he’s treating Cristal (Nathalie Kelley) horribly. No one would blame her if she did make a legitimate appointment with a divorce lawyer, but it turns out she wants to see a lawyer in order to take Blake’s money out of the prenup. She doesn’t want $7 million for every year they’re married, which is what Alexis got when the marriage fell apart. She wants Blake to see that she loves him for who he is (even though who he is is a class-A jerk about 60 percent of the time and it is going to wear very thin if he doesn’t start treating his wife better).

With that revelation out (at least to Anders, Blake doesn’t know yet), that means Alexis (Nicollette Sheridan) is about to whirl into town. She interrupts Thomas’ funeral (Blake’s eulogy, no less) with a “Sorry, I’m late. Traffic was a b*tch,” and everyone looks stunned.

Yesssss. Next week’s episode is the one we’ve all been waiting for. If Alexis and Cristal don’t fall into a pool, then what are we even doing here?