WTF: The EHANG 184 Drone Can Carry a Human 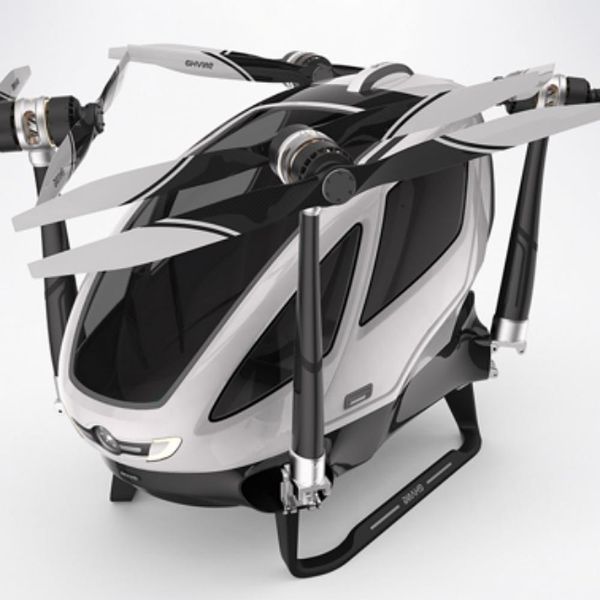 With selfie drones, travel-planning drones and consumer drones on the rise (literally), many tech aficionados are left asking, “What’s next? Flying cars?” Get ready to suspend your disbelief (and yourself) in mid-air, because a new drone manned by yours truly will make the futuristic concept of flying cars accessible this year. The EHANG 184, revealed at CES 2016 last week, is a single-seated human-flying drone that can actually transport you across town. Yup, this drone will make the Jetsons themselves jealous!

The EHANG 184 is way cooler than the primitive one-seater you may have driven in high school. When controlled through your tablet, the 184 lets you play the role of pilot by charting out your own flight path. Then, hop onto the drone and start jet-setting! The aerial vehicle is designed to carry individuals up to 220 pounds for short distances. So while you can’t get a ride on your trip around the world, you may be able to view your town from a wicked new vantage point for at least 20 minutes, the estimated battery life of the 184. According to EHANG co-founder Derrick Xiong’s statement to Quartz, this would equate to a range of around 50 miles. This is a pretty ideal distance for errands, morning commutes or curing a bit of weekend wanderlust.

Bringing a consumer drone to market, is, as expected, not without its complexities due to drone regulations. However, the company is believed to be in talks with national aviation authorities to ensure all goes smoothly for the launch of the 184. For techies who won’t believe in this flying wunderkind until they see it, the drone is expected to become available at some point in 2016 for between $200,000 and $300,000. So you’ll want to start saving… well, yesterday. Until then, check out the video below to see the 184 in action!

Would you ask for a lift from the EHANG 184? Tweet us @BritandCo!

Manasa Reddigari
Manasa is a freelance writer with a passion for the weird and wonderful technologies that are transforming life as we know it today.
Tech News
Entertainment
Tech News