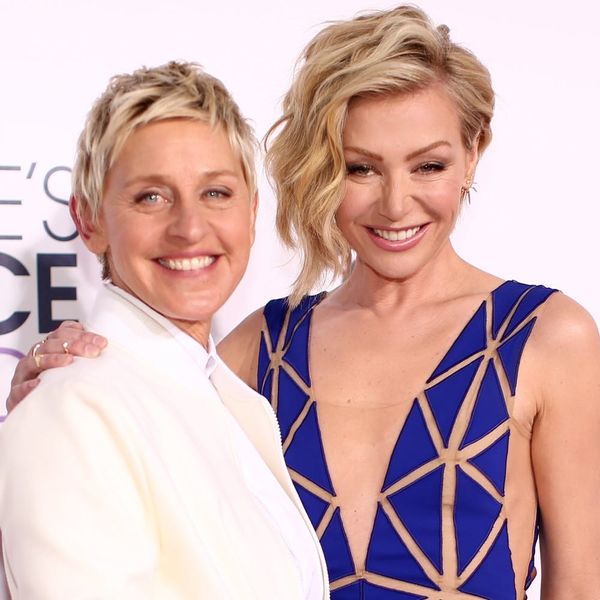 Ellen DeGeneres celebrated her 60th birthday last week, and the gifts keep coming! Her wife, Portia de Rossi, stopped by The Ellen Show on Thursday with the best present yet, moving DeGeneres to tears.

“It’s your 60th birthday and this gift had to be really special and it had to represent who you are and what you really care about,” de Rossi explained. “Not just now, but what you’ve always cared about. What you were influenced by and what has made you the amazing person that you are today.”

De Rossi used questions from the couple’s earliest days of dating, such as who her wife idolized and what she would do if she weren’t a famous entertainer, telling the audience that DeGeneres regularly says she feels like she’s “not doing enough.” Then she unveiled the most meaningful gift imaginable for her wife: plans to build the Ellen DeGeneres Campus of the Dian Fossey Gorilla Fund in Rwanda.

Fossey was an American activist who studied and worked to protect endangered mountain gorillas in Rwanda through the ’70s and ’80s. Growing up, DeGeneres became enamored with her “dedication to animals, her mind, and her bravery,” after learning about her through National Geographic and her famous book, Gorillas In the Mist (which was also turned into a 1988 film starring Sigourney Weaver as Fossey).

“Ellen, you will carry on Dian’s legacy by giving [the mountain gorillas] a permanent home in Rwanda,” De Rossi said, noting that the campus will facilitate tourism, education, and further scientific research. “Now, you will join Dian as a protector and champion of these amazing animals, the mountain gorillas [of which, she says, there are only 880 left]. Happy birthday!”

De Rossi also created a foundation in her wife’s name, The Ellen DeGeneres Wildlife Fund. “This is the first initiative for the fund that you can take and do whatever you want with it,” she said. “You’ve done amazing work for elephants and you can just continue and support whatever you want to do.”

DeGeneres was in tears at the thoughtfulness of the gift. “When we got married, Portia said, ‘It’s good to be loved, it’s profound to be understood,'” the talk show host said. “And she understands me. This is the best gift.” Yep, now we’re bawling. Happy Birthday, Ellen — you deserve the very best!