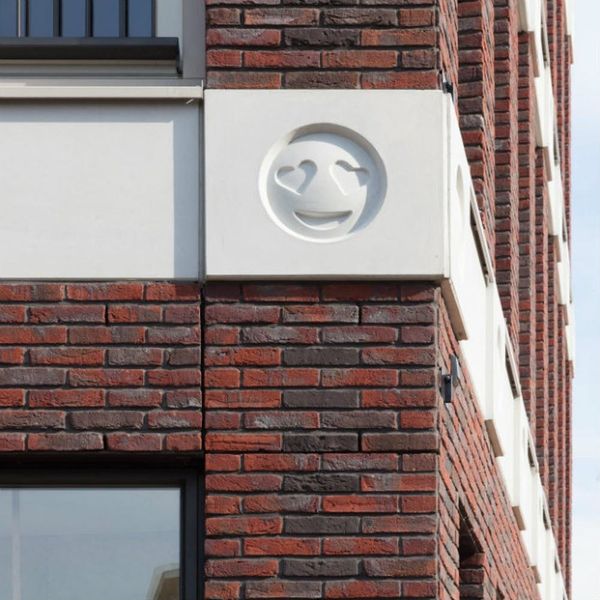 What was life before we had emojis? From flirting with your online crush to making your girl squad laugh over group text, the emotional faces have totally become a legit way to communicate without ever having to use words. There’s even a World Emoji Day! A new building in the Netherlands just cemented their pop-culture status even further by decorating a brand new building with concrete emojis. Scroll through pictures of the whimsical emoji-face design below and just try not to smile back.

An ultra-current twist on classical architecture, architect Changiz Tehrani told The Verge why he used 22 emojis as decoration on the Dutch building. “In classical architecture they used heads of the king or whatever, and they put that on the facade,” he explains. “So we were thinking, what can we use as an ornament so when you look at this building in 10 or 20 years you can say ‘hey this is from that year!’” Seems spot on to us.

To achieve the look, Tehrani’s architecture firm first chose the most recognizable OG emoji faces. Using emoji templates from WhatsApp, the team turned the designs into 3D models before casting them into long-lasting concrete versions. The emojis fit surprisingly well into the front part of the building design. You might not even notice that they’re more than decorative circles while walking past.

Each face marks the intersection of the building grid where brick and beams collide, its expression tailored to the activities that take place inside the walls. Since the new building is home to shops, flats, and a theater, school, and library, the emojis are a clever nod to the people who spend time inside during the day.

Tehrani shared that students seem to especially love the placement of faces, showing them off with photos and social media posts. While older people might not get it, Tehrani thinks that anyone with a smartphone will recognize the contemporary touch — something he hopes will add an element of fun, even if people stop using emojis altogether someday. “If you look at history, people always think ‘Oh this is timeless,’ or ‘This will stay forever,’ and they’re always wrong,” he told The Verge. “Maybe we won’t use emojis in 10 years — that’s fine. It’s still from our time.” The cool design might not be classic, but we’re going heart-eyed over it.

What do you think about using emojis in building or interior design? Tweet us your thoughts @BritandCo!

Krista Gray
Krista Gray is a web producer and freelance writer who lives in San Francisco. When she's not working with clients through her company GoldSquare, she loves reading, traveling, and learning new things.
Emoji
Creativity
Emoji
More From Creativity