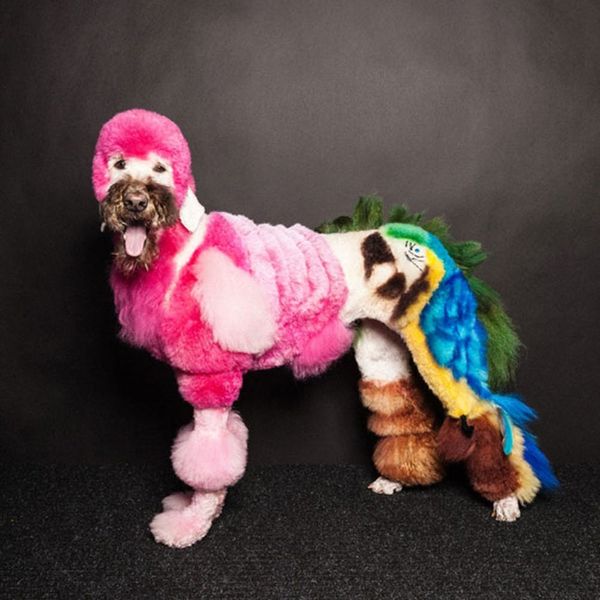 After you’ve painted all your appliances, washi taped your workspace and blinged out your fair share of canvases, the next DIY to go after is your dog. Well, for some people at least.

Paul Nathan released these images in his book, Groomed, which is based on the art of dog grooming. ‘Cause apparently that’s a thing.

Rest assured that the dyes are all non-toxic, and the dog never sits for longer than three hours in one session… although there could be several days of grooming sessions. But after spending time with the groomers, Paul Nathan swears that this is a cruelty-free zone and that the groomers go all out to make sure the dogs are comfortable and relaxed while getting trimmed, shaved, and technicolored — which is probably why you don’t see any fussy border collies splashing up the pages.

If you’re about to say, “How would the groomers feel if the dogs did that to them,” like I blurted out to myself, well, you can’t say that. Because they do. Read that again: The groomers dress up like the dogs for Intergroom, the largest international conference for extreme dog grooming, which takes place in New Jersey each year. We’re assuming the groomers declined being photographed to save themselves some humiliation. Or maybe it’s just their little secret. We hear you, we’d probably keep that on the DL as well.

If you’re interested in being one of the 2,000+ Intergroom attendees, you’re going to have to wait an entire year. The last one just happened April 5th to the 7th. And if you were there, you might have seen this clown…. or is it a Spanish conquistador?

Or maybe you spotted this guy.

The images you’ve seen so far are part of the “creative” grooming category. But the book isn’t all eccentric looks. It’s mostly just about impeccably groomed and beautiful dogs in general. Like this borzoi, whose hair seems to be slightly out of place if you ask us.

After seeing the rainbow ruckus, that ivory white fur seems boring. So let’s go back to this… a flamingo, on a tropical vacation!

If your coffee table is dying to uphold Groomed, you can grab it on Amazon for $25. And if you’re super into the the subculture of highly embellished animals, you’ll also need to check out Paul Nathan’s other books, Couture Dogs of New York and Generation Ink, a photo book of the most tatted up dermises in all of Williamsburg.

We leave you with one word: Yikes.

How do you feel about creative dog grooming? Let us know in the comments below.

Lex Monson
Alexis is the co-founder of Punkpost, the app that lets you send handwritten cards (yes, handwritten by a real human) in the amount of time it takes you to send a text message. The exclusive card collections are created by a community of artists and designers and hand letter pressed on high-quality cotton paper. Get the full experience by downloading the app from the iTunes Store.
Art
Entertainment
Art Books