Fall for These Summer-Ready Recipes for Pumpkin, Apple, and More Autumnal Produce 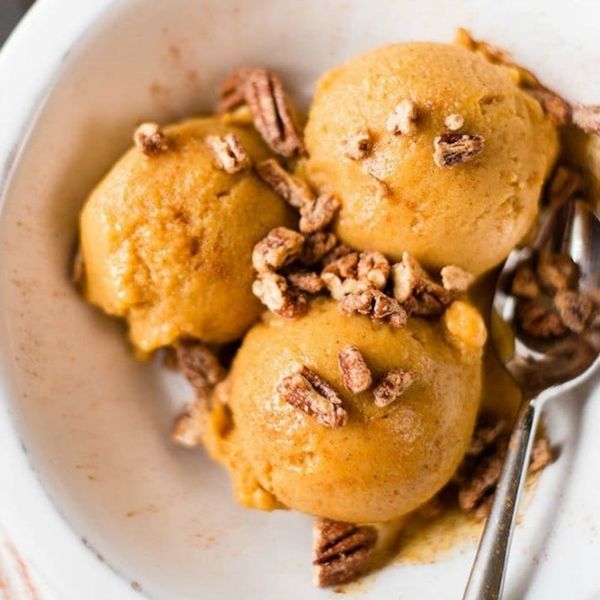 There’s a reason why pumpkin spice lattes start rearing their glorious heads at the end of the summer instead of waiting for true autumn to set in. It’s because we, the people, demand it. No matter how much we indulge in icy mojito cocktails or eat stone fruits with our dinner, by the time August rolls around, we’re all craving pumpkin, apple cider, and cinnamon. Thankfully, it’s just as easy to summer-ify a fall dish as it is to winterize a salad. Just take your favorite autumn ingredients, add some ice, and BOOM! Your craving is sated. These 15 cool recipes will give you just a taste of that October chill, helping you ride out the last heat waves of summer feeling utterly refreshed.

Warm apple crumble is even better when it’s the inspiration for homemade ice cream. Each bite will help you beat the heat. (via Domestic Gothess)

Move over, strawberries, because it’s time for blueberries and chocolate to have their time in the spotlight. They make this frozen drink all kinds of sweet, fruity, and earthy — just don’t forget the brûléed marshmallow on top. (via Jenny Shearawn)

The ice cream is a no-churn blend of Greek yogurt and bananas, and the waffles are store-bought, so you can spend more time eating your snack than you do making it. (via A Million Moments)

It’s hard not to love a slushie when it’s hot outside, especially one that’s free of artificial flavors and colors. This one is made from apple cider, giving you sweet-tart refreshment with each sip. (via The Lovely Life)

Homemade butterscotch ice cream is sandwiched between two shortbread cookies to make this icy treat. You can bet Harry Potter and his friends would be all over these during their summer vacations. (via Cherry Tea Cakes)

Apples and cinnamon make these tasty bites the first thing you’ll reach for in the morning. They’re sweetened with dates and just a touch of maple syrup, so they won’t leave you with a sugar crash later in the day. (via Rise Shine Cook)

These pops will give you the caffeine fix you need and the pumpkin flavor you crave, all in one go. Espresso powder gives them a hit of bold flavor. (via Sheri Silver)

Instead of pairing sweet ice cream with equally sweet soda, try sparkling apple cider instead. It’s just tart enough to balance the flavors in each sip (or spoonful) of your float. (via Amy Sheree)

When you’re feeling festive in the summer, you’ve got to go with an ice cream pie. Drizzled with salted caramel sauce, this pumpkin cinnamon masterpiece is worthy of a celebration in and of itself. (via Boulder Locavore)

Have your dessert and veggies too in this green smoothie. It’s like apple pie without having to turn on the oven. (via Root + Revel)

Smooth, creamy pumpkin hummus lends itself to all kinds of dipping. You can also use it as a sandwich spread, where its subtle sweetness works well with savory ingredients like smoked turkey and bacon. (via Purple Cinnamon)

An easy homemade apple sauce is folded into this rich sweet-cream ice cream. Salted roasted nuts add a little crunch to your cone. (via The Candid Kitchen)

Pumpkin can be surprisingly refreshing when it’s given the chance. Dairy-free yogurt gives this froyo a creamy, not cloying, texture, and candied pecans add a toasty flavor throughout. (via A Sweet Pea Chef)

Skip the latte and start your morning with this pumpkin spice smoothie instead. Top it with whipped cream on days when you’re feeling fancy. (via Lemon Tree Dwelling)

If you’ve ever been disappointed by a dense, leaden cheesecake, this dessert is for you. The sweet pumpkin filling is whipped and then frozen in the no-bake crust, so it stays nice and fluffy. (via Chelsea’s Messy Apron)
Justina Huddleston
Justina Huddleston is a food writer living in Los Angeles. When she's not busy writing, she spends her time in the kitchen creating both virtuous and decidedly junky vegan food. Buffalo chickpea pizza, anyone? She's also been known to eat a plain block of tofu or beans straight out of the can for lunch, but somehow those culinary adventures don't make it to her Instagram. You can follow Justina on Twitter or see what's cooking in her kitchen on her blog, A Life of Little Pleasures.
Comfort Food Recipes
Recipes
Comfort Food Recipes recipe roundup
The Conversation
Reviews:
More From Recipes