10 Water-Packed Foods That Will Keep You Hydrated 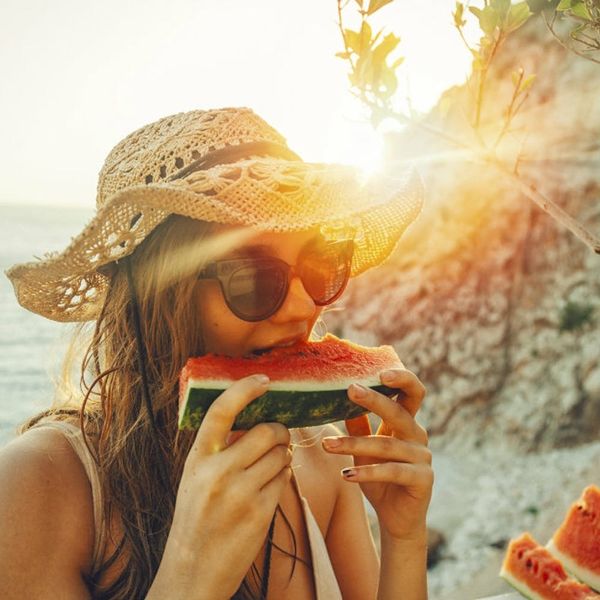 1. Watermelon: Duh, right? Watermelon is about 90 percent water by weight, and also contains a lot of good electrolytes that’ll help your body feel and perform at top level. Plus, watermelon contains lycopene, a cancer-fighting antioxidant. A lot of fruits, watermelon included, actually hydrate you more effectively than pounding a glass of water, because they contain the essential rehydration salts, calcium, potassium and sodium that your body craves (especially post-workout).

2. Cauliflower: At the less vibrant end of the spectrum: plain ol’ cauliflower. But don’t underestimate this white veggie. It may look boring, but it offers 92 percent water content, among a ton of other benefits, including acting as an anti-inflammatory.

3. Celery: So often on diets you hear that celery is “basically negative calories.” That’s not exactly true, but even if it were, celery still should be a part of your diet: These crunchy stalks contain nearly 96 percent water and vitamins A, C and K.

4. Cucumbers: Take those slices off your eyes and stick ’em in your mouth, pronto. Celery has the highest water content of any solid food, at just over 96 percent. Along with celery, they make an awesome addition to your yummy green juice.

5. Berries: Pretty much all berries are at least 80 percent water. Strawberries have the highest water content, at 90 percent. Whipped cream- and chocolate-covered versions optional.

6. Spinach: Dark, leafy greens are good for more than just iron and fiber. Spinach is around 90 percent water, and is packed with minerals and nutrients. Who knew Popeye was always so hydrated?

7. Tomatoes: Like watermelon, tomatoes contain lycopene, and come in at around 95 percent water content. And they’re just. So. Delicious — with or without the fresh mozzerella.

8. Grapefruit: There’s a reason all those old-fashioned diets started the day with a grapefruit breakfast. They’re only 30 calories (making them a better snack than meal), contain 90 percent water and also have phytonutrients called limonoids, which are known to inhibit cancerous tumor formation.

9. Green peppers: You can expect a good amount of water from any type of bell pepper, but green should be your go-to. Green peppers have the highest water content of any of their counterparts, at 94 percent.

10. Cantaloupe: We know, we know… cantaloupe is like the filler in the fruit salad. But if you can stomach it, it’s 90 percent water and packed with potassium.

How do you stay hydrated during summer and beyond? Tweet us your tips @BritandCo!